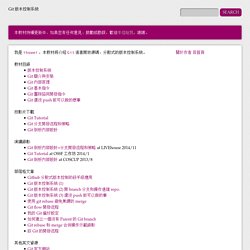 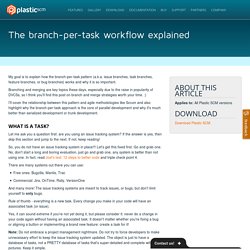 Branching and merging are key topics these days, especially due to the raise in popularity of DVCSs, so I think you'll find this post on branch and merge strategies worth your time. :) I'll cover the relationship between this pattern and agile methodologies like Scrum and also highlight why the branch-per-task approach is the core of parallel development and why it's much better than serialized development or trunk development.

What is a task? Let me ask you a question first: are you using an issue tracking system? If the answer is yes, then skip this section and jump to the next. So, you do not have an issue tracking system in place!!! There are many systems out there you can use: Free ones: Bugzilla, Mantis, Trac Commercial: Jira, OnTime, Rally, VersionOne And many more! Rule of thumb - everything is a new task. The task workflow. Branching and Merging Practices. Git & Continuous Integration – Does that work? In my last blog post I was mentioning 6 arguments why you shouldn’t use Git. 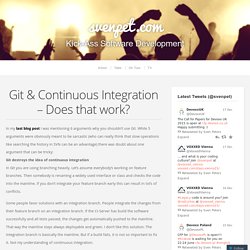 While 5 arguments were obviously meant to be sarcastic (who can really think that slow operations like searching the history in SVN can be an advantage) there was doubt about one argument that can be tricky:Git destroys the idea of continuous integration In Git you are using branching heavily. Let’s assume everybody’s working on feature branches. Then somebody is renaming a widely used interface or class and checks the code into the mainline. If you don’t integrate your feature branch early this can result in lot’s of conflicts. Some people favor solutions with an integration branch. I stil prefer the SVN statement: “Commit early, commit ofter” what should be translated for DVCS into “Push early, push often”. Solution 1: Making the mainline the communication point again Switch from SVN to Git and work as you have before. Solution 2: Promiscuous Integration These are just my thoughts.

FeatureBranch. Version control · continuous integration tags: With the rise of Distributed Version Control Systems (DVCS) such as git and Mercurial, I've seen more conversations about strategies for branching and merging and how they fit in with Continuous Integration (CI). 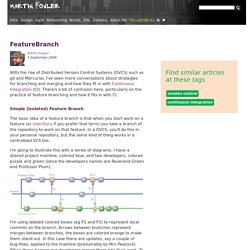 There's a bit of confusion here, particularly on the practice of feature branching and how it fits in with CI. Simple (isolated) Feature Branch The basic idea of a feature branch is that when you start work on a feature (or UserStory if you prefer that term) you take a branch of the repository to work on that feature. I'm going to illustrate this with a series of diagrams. I'm using labeled colored boxes (eg P1 and P2) to represent local commits on the branch. In order to ensure things are working properly, they can run builds and tests on their branch. The advantage of feature branching is that each developer can work on their own feature and be isolated from changes going on elsewhere. Configuration Management (CM and SCM) Q&A and Advice. Feature branches and toggles.

I’m a huge Martin Fowler fan, but one bit of advice I still can’t understand is the recommendation to eschew feature branches for feature toggles. 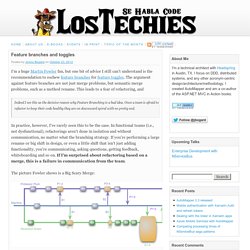 The argument against feature branches are not just merge problems, but semantic merge problems, such as a method rename. This leads to a fear of refactoring, and Indeed I see this as the decisive reason why Feature Branching is a bad idea. Once a team is afraid to refactor to keep their code healthy they are on downward spiral with no pretty end. In practice, however, I’ve rarely seen this to be the case. The picture Fowler shows is a Big Scary Merge: The idea here is that the P branch, merged in, makes it difficult for the G branch to come in. The alternative is a Continuous Integration/Delivery picture, where developers are more or less working straight off of the mainline branch: From my experience, without an effective sandbox, commits actually become less frequent, as the pressure is on to have a commit “deployable”.