We are two travelers making our way from city to city exploring the best the world has to offer. Join along travels! 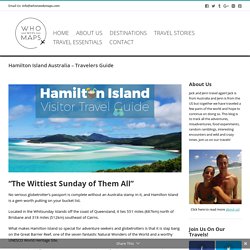 The islands gradually evolved into an upmarket tourist destination in the 1970s, famous for their sailing opportunities and as a jumping off point for exploring the Great Barrier Reef. This eco-friendly island destination is now owned by the family of Australian winemaker, Bob Oakley and what makes it particularly special is that it is still two-thirds undeveloped. Yearly Events February visitors, Hamilton Island provides the perfect romantic escape for Valentine’s Day. April / May sees runners lining up to take part in the 21km Stamford Financial Hilly Half Marathon Challenge on the first Sunday of the month. Later in May there’s the Mother’s Day Classic Walk in the Park to raise funds for breast cancer. Things to Do in Alaska. Photo Diary: Pictures of Alaska - Who Needs Maps. 5 Budget Travel Tips You Can't Afford To Miss - Who Needs Maps.

Not only are people looking for holidays now days, they are also looking for life-changing adventures that don’t cost an arm and a leg. 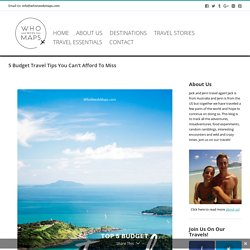 This can be a 1-month trip, a year-long trip or even in extreme cases a 5+ year trip. Of course, this becomes financially difficult. That is what we have thrown together some budget travel tips for you to think about on your next trip. We collected these tips while traveling Southeast Asia on a shoestring budget for 6 months but the general principle applies for no matter what country you visit as tourists are super easy for locals to exploit ;) 1. Get a feel for how much the essentials cost and the standard prices. The items we used for our comparisons were: – A bottled water – The price of a beer – The most common meal on all menus.

Check out the Big Mac index of the world here which also gives you a pretty good corner stone for comparison! 2. It is always a good idea to quiz the locals on pricing, the best spots to visit and the best ways to get around! Holiday Gifts for Travelers - Who Needs Maps. 11 Best Grand Canyon Adventures - Who Needs Maps. Hangover Remedies Around the World - Who Needs Maps. Backpacking vietnam. Airport Perks. For the most part, travellers want to spend as little time as possible in airports due to their hectic, and stressful environment. 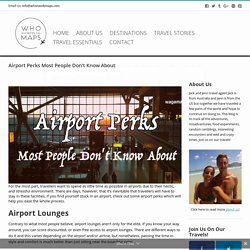 There are days, however, that it’s inevitable that travellers will have to stay in these facilities. If you find yourself stuck in an airport, check out some airport perks which will help you ease the whole process. Airport Lounges Contrary to what most people believe, airport lounges aren’t only for the elite. If you know your way around, you can score discounted, or even free access to airport lounges. How to use Groupon for your Travels - Who Needs Maps. Travel saved our relationship. Most Romantic Hotels in El Nido, Palawan - Who Needs Maps. A Taste of Seattle: Pike Place Market with Eat Seattle - Who Needs Maps.

Southeast Asia - Destinations. Travel Stories. Travel tips. Big Sur City Guide - Who Needs Maps. -Although you normally go to Big Sur to see the beautiful beaches, don’t let the pretty outdoors fool ya! As it is on the coastline, it gets a bit foggy and cold so don’t forget to bring a jacket. -But saying that, while we hiked the sun was out and it was strong so bring some sunscreen, get the spray. -Gas in Big Sur is INSANELY expensive. Like $6.7 a gallon expensive. If you have half a tank or less left, fill up at the big cities or before the 200 mile stretch of coastline.

. – We brought a lightweight backpack from LCI brands onto all our hikes to carry our gear and it was easily the best purchase! – Food is a bit pricey and underwhelming in Big Sur. Best Vietnamese Coffee Shops in Hanoi - Who Needs Maps. Travel Giveaway Pack - Who Needs Maps. Brunch at The Modern Honolulu - Who Needs Maps.

Newport Beach Wine Tasting Orange Coast Winery - Who Needs Maps. Yes, friends, a wine tour with a taste of all the wines and a cheese plate. 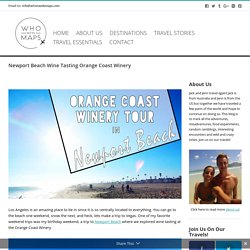 We went to Orange Coast Winery, a microwinery using California’s finest grapes! We tried all sorts of red, whites champagne, and did I mention cheese? Newport has some crazy deals that I have never seen available in LA. We actually went through a Groupon deal (and if you don’t use Groupon, here is your chance). For a crazy low price of $54 for THE TWO OF US, we got to taste all the wines, a plate (or three) of cheese, a bottle of wine to take home, and two beautiful souvenir wine glasses! Best Party Cities in the World - Who Needs Maps. 5 Best Apps for Traveling - Who Needs Maps. Halong Bay - Halong Bay, Vietnam Travel Blog.

Coachella 2014 - Who Needs Maps. Nothing makes me happier than music festivals, especially Coachella! 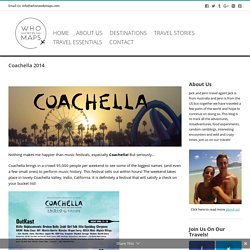 But seriously… Coachella brings in a crowd 95,000 people per weekend to see some of the biggest names (and even a few small ones) to perform music history. This festival sells out within hours! The weekend takes place in lovely Coachella Valley, Indio, California. Ha Long Bay. Ha Long Bay Ha Long Bay (also "Halong Bay") is in northern Vietnam, 170 km (105 mi) east of Hanoi. 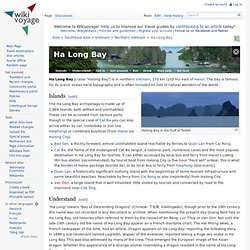 The bay is famous for its scenic ocean karst topography and is often included on lists of natural wonders of the world. Halong Bay in the Gulf of Tonkin Islands[edit] The Ha Long Bay archipelago is made up of 1,969 islands, both settled and uninhabited. Ban Sen, a thickly forested, almost uninhabited island reachable by ferries to Quan Lan from Cai Rong.Cat Ba, the home of the endangered Cat Ba langur, a national park, numerous caves and the most popular destination in Ha Long Bay for tourists.

Understand[edit] "Ha Long" means "Bay of Descending Dragons" (Chinese: 下龙湾; Xiàlóngwān), though prior to the 19th century this name was not recorded in any document or archive. Get in[edit] There are a number of domestic connections, particularly to the ports of Halong City and Haiphong. Top Party Destinations In Southeast Asia - Who Needs Maps. You’re in Southeast Asia, countries filled with unbelievable scenery, some great cultures to explore and learn, tasty foods, and yes, insanely wild parties! 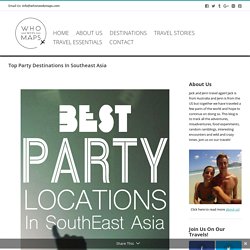 Many of the big cities are equipped with a good nightlife like Kuta, Bali, Bangkok, Pub street in Siem Reap, but we are talking actual big parties! After 3 months of backpacking Southeast Asia, we have discovered some of the top party destinations. Every party has its reputation but then again, every experience is what you make it. So grab a beer, its time for some debauchery!

The Full Moon Party in Koh Phangan, Thailand Thailand is renown for its amazing beaches, unbelievable wildlife, and the insanely wild parties. We were especially lucky because the Full Moon Party happened on the same day as the World Cup Finals! Tubing in Vang Vieng, Laos. Roberts Hawaii Circle Island Tour - Who Needs Maps. Gone Surfing Hawaii - Who Needs Maps. Your access to this site has been limited. Your access to this service has been temporarily limited. 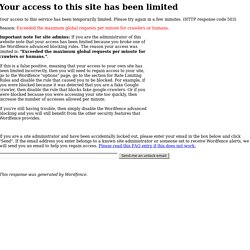 ". If this is a false positive, meaning that your access to your own site has been limited incorrectly, then you will need to regain access to your site, go to the Wordfence "options" page, go to the section for Rate Limiting Rules and disable the rule that caused you to be blocked. If you're still having trouble, then simply disable the Wordfence advanced blocking and you will still benefit from the other security features that Wordfence provides.