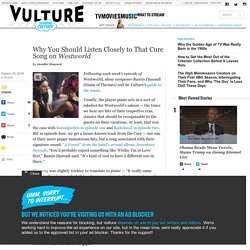 Usually, the player piano acts as a sort of jukebox for Westworld’s saloon — the tunes we hear are hits of their respective eras, classics that should be recognizable to the guests on their vacations. At least, that was the case with Soundgarden in episode one and Radiohead in episode two. But in episode four, we get a lesser-known track from the Cure — not one of their more poppy mainstream hits, but a song associated with their signature sound: “A Forest” from the band’s second album, Seventeen Seconds.

“You’d probably expect something like ‘Friday I’m in Love’ first,” Ramin Djawadi said. “It’s kind of cool to have a different one in there.” Westworld Soundtrack Violent Delights Have Violent Ends. Music of WESTWORLD : westworld. Exclusive clip of Jeffery Wright talking about the when the park meets the lab. Exclusive Clip of Thandie Newton Explaining the Premise of #Westworld. Westworld - 1x3 The Stray - Group Reaction.