Getting Stronger - Wordpress Toolbar. This is Your Brain on Habits. Emily vanSonnenberg, MAPP '10, currently operates a private practice called Psych Positive for individuals, couples, and families, especially working on improving complex non-traditional relationships such as those between step-parents and step-children. 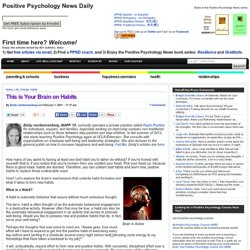 In the summer of 2012, she starts teaching Positive Psychology again at UCLA Extension. She consults with organizations on employee well-being and leadership strategies. She also lectures to the general public on how to increase happiness and well-being. Full Bio. Emily's articles are here. The Science of Good Habits and How to Form Them. Taking a long term view of success is critical, and it doesn’t take a psychologist to tell you that discipline is how you get from Point A to the sometimes elusive Point B. 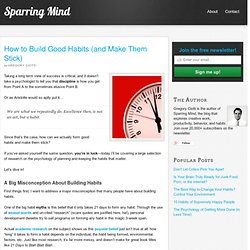 Or as Aristotle would so aptly put it… We are what we repeatedly do. The Science of Good Habits and How to Form Them. Article. According to a Stanford psychologist, you’ll reach new heights if you learn to embrace the occasional tumble. 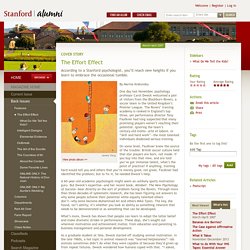 One day last November, psychology professor Carol Dweck welcomed a pair of visitors from the Blackburn Rovers, a soccer team in the United Kingdom’s Premier League. The Rovers’ training academy is ranked in England’s top three, yet performance director Tony Faulkner had long suspected that many promising players weren’t reaching their potential. Ignoring the team’s century-old motto—arte et labore, or “skill and hard work”—the most talented individuals disdained serious training. On some level, Faulkner knew the source of the trouble: British soccer culture held that star players are born, not made. If you buy into that view, and are told you’ve got immense talent, what’s the point of practice? A 60-year-old academic psychologist might seem an unlikely sports motivation guru.

As a graduate student at Yale, Dweck started off studying animal motivation. How Do I Break a Habit? First, Notice. Stick when you're stressed. When people are stressed out, they return to their fundamental routines -- whether those are good or bad. 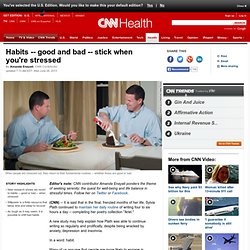 New research shows we revert to habits -- good or bad -- when stressedWillpower is a finite resource that takes time and sleep to recoverAs tough as it may seem, it is possible to shift bad habits Editor's note: CNN contributor Amanda Enayati ponders the theme of seeking serenity: the quest for well-being and life balance in stressful times. Follow her on Twitter or Facebook. (CNN) -- It is said that in the final, frenzied months of her life, Sylvia Plath continued to maintain her daily routine of writing four to six hours a day -- completing her poetry collection "Ariel. " A new study may help explain how Plath was able to continue writing so regularly and prolifically, despite being wracked by anxiety, depression and insomnia.

In a word: habit. Amanda Enayati Stress and sickness Getting rid of stress Stress may be causing your cravings. 5 Scientific Ways to Build Habits That Stick. “We are what we repeatedly do. 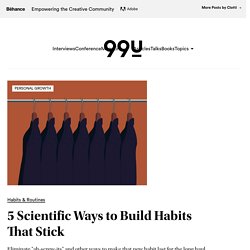 Excellence then, is not an act, but a habit.” Sobering words from Aristotle, and an astute reminder that success doesn’t come overnight. Emotional Habits, by Ajahn Sumedho. I’ve been here at Amaravati for fifteen years [1999]. 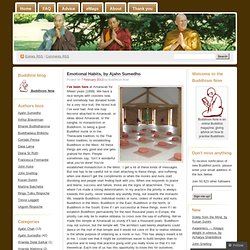 We have a nice temple with cloisters now, and somebody has donated funds for a very nice kuti, the nicest kuti I’ve ever had. And one may become attached to Amaravati, or ideas about Amaravati, or the sangha, to monasticism or Buddhism, to being a good Buddhist monk or to the Theravada tradition, to the Thai forest tradition, to establishing Buddhism in the West. All these things are very good and one gets praised for them. People sometimes say, ‘Isn’t it wonderful what you’ve done! You’ve established monasticism in the West.’ I now see the emotional habits that one has as vipaka-kamma (result of kamma). You can see that every moment of your life you have this. This seems to be a time when this kind of teaching is becoming increasingly appreciated.

If we contemplate in the terms of just being one human individual at this time, we can see that what we learn through awareness is something very ordinary and unimpressive. Like this: How to Make Happiness a Habit. Www.spring.org.uk/images/Making-Habits-Breaking-Habits-by-Jeremy-Dean-ChapOne.pdf. This is Your Brain on Habits. Habits: How They Form And How To Break Them. Routines are made up of a three-part "habit loop": a cue, a behavior and a reward. 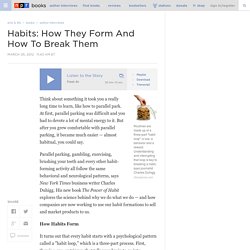 Understanding and interrupting that loop is key to breaking a habit, says journalist Charles Duhigg. iStockphoto.com hide caption itoggle caption iStockphoto.com. The Four Habits that Form Habits. By Leo Babauta My daughter wants to work out more, but she has a hard time forming the habit (many of you might be familiar with this problem). 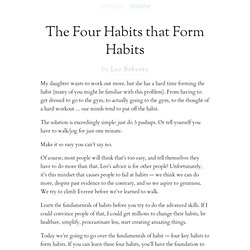 From having to get dressed to go to the gym, to actually going to the gym, to the thought of a hard workout … our minds tend to put off the habit. The solution is exceedingly simple: just do 3 pushups. Or tell yourself you have to walk/jog for just one minute. Make it so easy you can’t say no. Of course, most people will think that’s too easy, and tell themselves they have to do more than that. Learn the fundamentals of habits before you try to do the advanced skills. Six Habits of Highly Empathic People. Republished from greatergood.berkeley.edu By Roman Krznaric If you think you’re hearing the word “empathy” everywhere, you’re right. It’s now on the lips of scientists and business leaders, education experts and political activists.