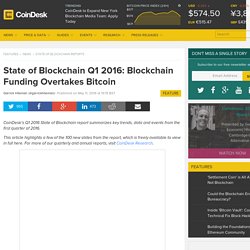 This article highlights a few of the 100 new slides from the report, which is freely available to view in full here. For more of our quarterly and annual reports, visit CoinDesk Research. As blockchain hype begins to subside and entrepreneurs and organizations get down to the business of implementation and execution, a new debate has emerged over timing. Splitting industry observers is a key question – Are we just short distance (1-2 years) away from witnessing the radical, transformative effects of blockchain technology?

Or is five to 10 years a more realistic timeframe before blockchain technology fully matures and achieves wide adoption? Nearly two-and-a-half years have now passed since Marc Andreessen penned a widely referenced New York Times op-ed about how bitcoin reminded him of the Internet circa 1993. Venture bounce back Investors go blockchain The rise of Ethereum. MIT ChainAnchor - Bribing Miners to Regulate Bitcoin. Based on the information I have available to me, it appears that the MIT ChainAnchor Project is in part an attempt to get Bitcoin users to register their real world identities and associate their transactions with those identities. 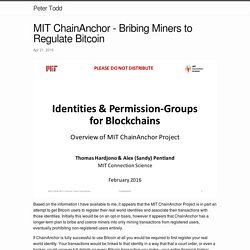 Initially this would be on an opt-in basis, however it appears that ChainAnchor has a longer-term plan to bribe and coerce miners into only mining transactions from registered users, eventually prohibiting non-registered users entirely. If ChainAnchor is fully successful to use Bitcoin at all you would be required to first register your real world identity. Your transactions would be linked to that identity in a way that that a court order, or even a hacker, could uncover full details on every Bitcoin transaction you make - your entire financial history, and for that matter, the full financial history of all Bitcoin users. This would be done in three main stages: My Sources. DecentralizedApplications/README.md at master · DavidJohnstonCEO/DecentralizedApplications. 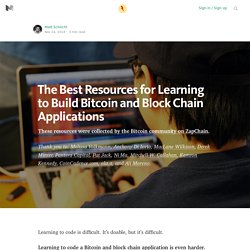 It’s doable, but it’s difficult. Learning to code a Bitcoin and block chain application is even harder. Not only do you need to understand programming, but you also need to be able to wrap your mind around new concepts that only a very few number of people understand. “But Matt! I want to learn how to build a Bitcoin application! Don’t worry! 1. This is a new book, really the first of it’s kind, that is tailored completely to developers interested in getting started with Bitcoin and block chain development. Purchase the book here. 2. This is an incredible resource of Bitcoin knowledge. If you want to learn about programming, mining, sidechains, proof of work, colored coins… anything. View the reading list here. Technical Introduction to Hyperledger Fabric - Cloud Foundry Live. Bitcoin and Cryptocurrency Technologies - Princeton University. About the Course To really understand what is special about Bitcoin, we need to understand how it works at a technical level. 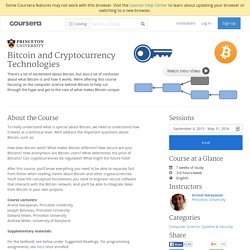 We’ll address the important questions about Bitcoin, such as: How does Bitcoin work? What makes Bitcoin different? How secure are your Bitcoins? After this course, you’ll know everything you need to be able to separate fact from fiction when reading claims about Bitcoin and other cryptocurrencies. Course Lecturers:Arvind Narayanan, Princeton University Joseph Bonneau, Princeton University Edward Felten, Princeton University Andrew Miller, University of Maryland Supplementary materials: For the textbook, see below under Suggested Readings. Suggested Readings. Node.js Tutorial. Node.js is a very powerful JavaScript-based framework/platform built on Google Chrome's JavaScript V8 Engine. 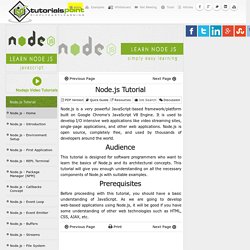 It is used to develop I/O intensive web applications like video streaming sites, single-page applications, and other web applications. Node.js is open source, completely free, and used by thousands of developers around the world. This tutorial is designed for software programmers who want to learn the basics of Node.js and its architectural concepts. This tutorial will give you enough understanding on all the necessary components of Node.js with suitable examples. Before proceeding with this tutorial, you should have a basic understanding of JavaScript. For most of the examples given in this tutorial, you will find a Try it option, so just make use of this option to execute your Node.js programs on the spot and enjoy your learning.

Try the following example using the Try it option available at the top right corner of the below sample code box (on our website): /* Hello World! TradeBlock. TradeBlock’s XBX Index represents a real-time, USD-equivalent spot rate for bitcoin. 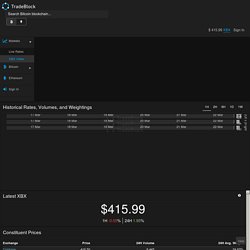 The index value is algorithmically calculated once every second based on observed trading activity on leading bitcoin exchanges. The index has been in operation since April 2014 and was launched publicly on November 3, 2014. The XBX Index is designed as a reference rate to track liquidity while also adjusting for deviations caused by anomalies and manipulation attempts at individual exchanges. While the precise formula underlying the index is currently proprietary, the key elements of the algorithm are outlined below. Volume Weighting Exchanges with greater liquidity receive a higher weighting in the index, increasing the ability to execute against the index in the underlying spot markets.

Price Variance Weighting The index price reflects data points that are discretely weighted in proportion to their variance from the rest of the cohort. Inactivity Adjustment Related Updates and Analysis. Blockchain Search Engine for Bitcoin — Goochain.