Examples Of Myers Briggs Personalities In Stories. Whatever one may say about the applicability of the Myers-Briggs indicator in Real Life, it is a valuable tool for stories. 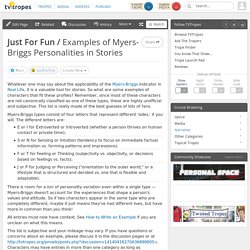 So what are some examples of characters that fit these profiles? Remember, since most of these characters are not canonically classified as one of these types, these are highly unofficial and subjective. This list is really made of the best guesses of lots of fans. Myers-Briggs types consist of four letters that represent different 'sides,' if you will. The different letters are: E or I for Extroverted or Introverted (whether a person thrives on human contact or private time); S or N for Sensing or Intuition (tendency to focus on immediate factual information vs. forming patterns and impressions); F or T for Feeling or Thinking (subjectivity vs. objectivity, or decisions based on feelings vs. facts); J or P for Judging or Perceiving ("orientation to the outer world," or a lifestyle that is structured and decided vs. one that is flexible and adaptable). .

Sex Trivia - Interesting Sexual Facts about both Animals and Humans - The Sex eZine. Sex Position Photography Move your mouse over the different positions and the image changes to the appropriate position. 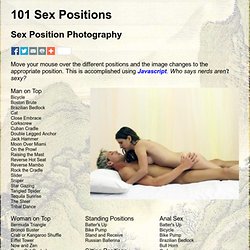 However we should note that its not a necessity to learn them all. Rather its simply a good idea to experiment and learn new positions over time and build up a repertoire. . #3. List of common misconceptions - Wikipedia, the free encyclopedia. Eco Friendly Companies. Projects // A Beautiful Mess D.I.Y Index. 10 Dark Disney Moments. “The Storm”: More Than Just a Story. "The Storm": More Than Just a Story Joanna Bartee In the short story "The Storm" by Kate Chopin, the two main characters, Calixta and Alcee, had a flirtation several years before the story takes place, but each made a more suitable marriage to someone else and they have not seen each other since. 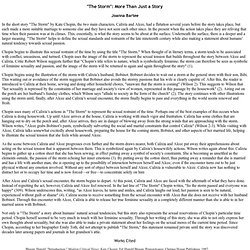 Stuff no one told you: Simple truths of life. At some point in 2010, Alex Noriega, illustrator from Barcelana, was going through a crisis due to some isues at work. 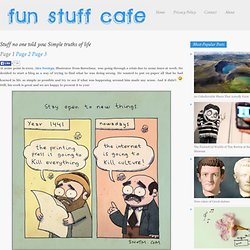 He decided to start a blog as a way of trying to find what he was doing wrong. He wanted to put on paper all that he had learned in life as simple as possible and try to see if what was happening around him made any sense. And it didn’t. Japanese bondage. 'Kinbaku' vs. 'shibari'[edit] There is much discussion about the distinction between shibari and kinbaku, and whether one term is more appropriate than another. 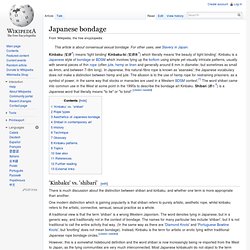 One modern distinction which is gaining popularity is that shibari refers to purely artistic, aesthetic rope, whilst kinbaku refers to the artistic, connective, sensual, sexual practice as a whole. A traditional view is that the term 'shibari' is a wrong Western Japonism. The mystery of the anasazi - envasion.net. Top 10 Lost Cities. Calibrating the Zodiac - Chantal Jègues-Wolkiewiez. Index of free personality tests and intelligence tests. American History X 1998 XviD DVDRip Swesub prien. Run Lola Run. Plot[edit] The house in Albrechtstraße (Berlin-Mitte) where the three episodes begin Intro[edit] The film begins with Lola (Franka Potente) receiving a phone call from her distraught boyfriend, Manni (Moritz Bleibtreu). 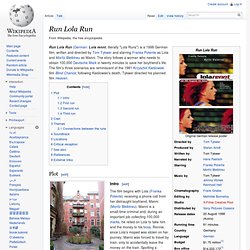 Manni is a small-time criminal and, during an important job collecting 100,000 marks, he relied on Lola to take him and the money to his boss, Ronnie; since Lola's moped was stolen on her journey, Manni was forced to travel by train, only to accidentally leave the money on the train. Spotting a homeless man examining the money bag as the train departed, Manni pursued the train, only to find the man and the money gone. Calling from a phone booth, Manni explains he has 20 minutes to gather 100,000 marks before Ronnie arrives and kills him. The main part of the film is divided in three "runs". First run[edit] Hanging up the phone, Lola starts running and passes a man with a dog; the dog growls at her, causing her to sprint faster. Second run[edit] Third run[edit] Cast[edit] Wings of Desire. Wings of Desire (Der Himmel über Berlin, translated literally as The Heaven over Berlin) is a 1987 Franco-German romantic fantasy film directed by Wim Wenders. 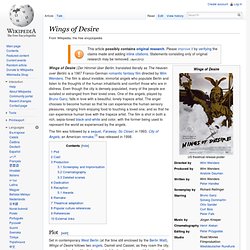 The film is about invisible, immortal angels who populate Berlin and listen to the thoughts of the human inhabitants and comfort those who are in distress. Even though the city is densely populated, many of the people are isolated or estranged from their loved ones. One of the angels, played by Bruno Ganz, falls in love with a beautiful, lonely trapeze artist.