Jeff Whalley is dedicated to providing law support to situations such as Family Law, Divorce, Child Custody & Support, Domestic Violence, Modifications, Criminal Law, Personal Injury, etc. If you’re going through such situations and have decided to hire an attorney at Whalley Law, we are dedicated to helping Pierce County residents attain the legal representation you deserve. Contact us now at (253) 565-3209 to find out more about how we can assist you.

Why Even The Best Personal Injury Lawyers Will Refuse Your Case. You got hurt while driving on the roads in Tacoma city, Washington and you feel that a personal injury lawyer should fight your case to get you compensated by the offender. 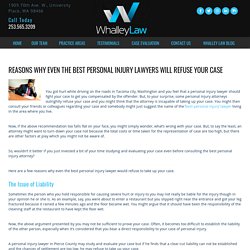 But, to your surprise, some personal injury attorneys outrightly refuse your case and you might think that the attorney is incapable of taking up your case. You might then consult your friends or colleagues regarding your case and somebody might just suggest the name of the ‘best personal injury’ lawyer living in the area where you live. Now, if the above recommendation too falls flat on your face, you might simply wonder, what’s wrong with your case. But, to say the least, an attorney might want to turn down your case not because the total costs or time taken for the representation of case are too high, but there are other factors at play which you might not be aware of. Do I have legal control over the other parent’s visit to my Child? So what if you are a child’s mother/father, I take better care of the child.” 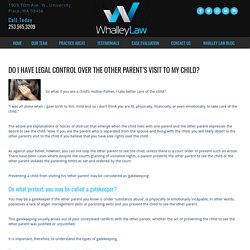 “I was all alone when I gave birth to this child and so I don’t think you are fit, physically, financially, or even emotionally, to take care of the child.” The above are explanations or ‘voices of distrust’ that emerge when the child lives with one parent and the other parent expresses the desire to see the child. Have You Changed Your Mind After You Have Signed The Divorce Papers? The stages through which you need to go for seeking a divorce isn’t easy by any stretch of the imagination and you might even lose a pound of your flesh. 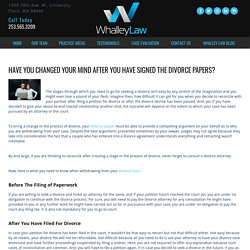 Imagine then, how difficult it can get for you when you decide to reconcile with your partner after filing a petition for divorce or after the divorce decree has been passed. And, yet, if you have decided to give your about-to-end marital relationship another shot, the outcome will depend on the extent to which your case has been pursued by an attorney or the court. Child Custody Support In Tacoma. If you’re a mother or father that’s planning a divorce, child custody and support are two major issues that must be handled and determined. 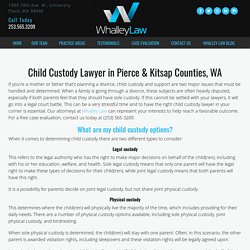 When a family is going through a divorce, these subjects are often heavily disputed, especially if both parents feel that they should have sole custody. If this cannot be settled with your lawyers, it will go into a legal court battle. This can be a very stressful time and to have the right child custody lawyer in your corner is essential. Our attorneys at Whalley Law can represent your interests to help reach a favorable outcome. For a free case evaluation, contact us today at (253) 565-3209. Types of Personal Injury Cases and How To Receive a Compensation? It was just another day for David when he was walking along the 6th Avenue of Tacoma city, Washington when he was hit by a car driver from behind. 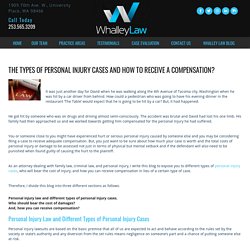 How could a pedestrian who was going to have his evening dinner in the restaurant ‘The Table’ would expect that he is going to be hit by a car? But, it had happened. He got hit by someone who was on drugs and driving almost semi-consciously. The accident was brutal and David had lost his one limb. His family had then approached us and we worked towards getting him compensated for the personal injury he had suffered. Establishing a Child’s Custody When Parents Are an Unmarried Couple! With a relationship that never ended in marriage; a relationship that brings forth an offspring as a blessing in disguise and; a relationship that ends on a bad note with the unmarried couple finally breaking up, establishing a child’s custody gets difficult and challenging. 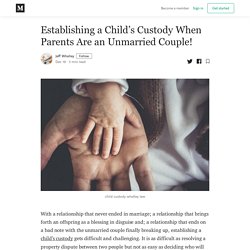 It is as difficult as resolving a property dispute between two people but not as easy as deciding who will keep the furniture or who will keep the car. Reasons Why Domestic Violence Cases Go Unreported. Come to think of domestic violence and you usually come across cases where it’s the women who are battered most in the United States. 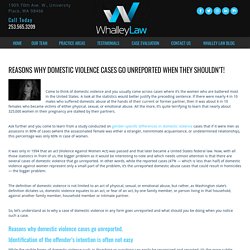 A look at the statistics would better justify the preceding sentence. If there were nearly 4 in 10 males who suffered domestic abuse at the hands of their current or former partner, then it was about 6 in 10 females who became victims of either physical, sexual, or emotional abuse. All the more, it’s quite terrifying to learn that nearly about 325,000 women in their pregnancy are stalked by their partners. Ask further and you come to learn from a study conducted on gender-specific differences in domestic violence cases that if it were men as assassins in 80% of cases (where the assassinated female was either a stranger, nonintimate acquaintance, or undetermined relationship), this percentage was only 60% in case of women.

10 Important Things You Should not do Before, During, or After Divorce. When it comes to divorce, most couples find it emotionally draining and a time-taking separation process not because of the family court systems (because a divorce attorney is expected to deliver services on time and which most divorce attorneys do without leading their clients astray) but because of the mistakes often committed by the couples themselves. 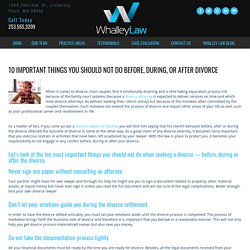 Such mistakes can extend the process of divorce and impact other areas of your life as well such as your professional career and resettlement in life.