Research sources for AS90926

Science Media Centre. NZ Geographic. Ministry for the Environment. The world’s oceans are a large carbon sink, with almost all marine habitats having some role in capturing and storing carbon. 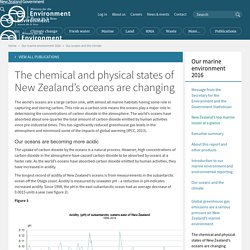 This role as a carbon sink means the oceans play a major role in determining the concentrations of carbon dioxide in the atmosphere. The world’s oceans have absorbed about one-quarter the total amount of carbon dioxide emitted by human activities since pre-industrial times. This has significantly reduced greenhouse gas levels in the atmosphere and minimised some of the impacts of global warming (IPCC, 2013). Our oceans are becoming more acidic The uptake of carbon dioxide by the oceans is a natural process. The longest record of acidity of New Zealand’s oceans is from measurements in the subantarctic ocean off the Otago coast.

Figure 3 Click to enlarge view Note: The decreasing pH over an extended time period indicates the ocean has become more acidic. Read a description of this image. NZ Ocean Acidification Community. Effects of rising ocean acidification on fisheries. Last updated 12:09, August 18 2016 Peter Drury/Fairfax NZ There could be problems if snapper behaviour changes and they lose their fear of predators. 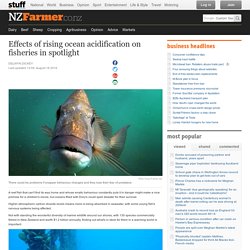 A reef fish that can't find its way home and whose erratic behaviour constantly puts it in danger might make a nice premise for a children's movie, but oceans filled with Dory's could spell disaster for their survival. Higher atmospheric carbon dioxide levels means more is being absorbed in seawater, with some young fish's nervous systems being affected. Not with standing the wonderful diversity of marine wildlife around our shores, with 130 species commercially fished in New Zealand and worth $1.2 billion annually, finding out what's in store for them in a warming world is important. 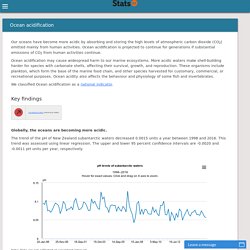 Ocean acidification is projected to continue for generations if substantial emissions of CO2 from human activities continue. Ocean acidification may cause widespread harm to our marine ecosystems. More acidic waters make shell-building harder for species with carbonate shells, affecting their survival, growth, and reproduction. These organisms include plankton, which form the base of the marine food chain, and other species harvested for customary, commercial, or recreational purposes. Ocean Acidification. Who we are We are a group of scientists who, in 2006, began to assess the chemical and biological effects of Ocean Acidification in the New Zealand context. 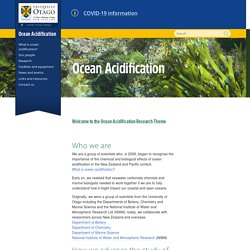 Early on, we realised that seawater carbonate chemists and marine biologists needed to work together if we are to fully understand how OA might impact our coastal and open oceans. Originally, we were a group of scientists from the University of Otago (Departments of Botany, Chemistry and Marine Science) and the National Institute of Water and Atmospheric Research Ltd (NIWA); today, we collaborate with researchers across New Zealand and overseas. RNZ - seafood affected by ocean acidity. By Katie Doyle Paua, mussels and kina are at risk from increase in acid levels in the ocean and serious action is needed, scientists say. 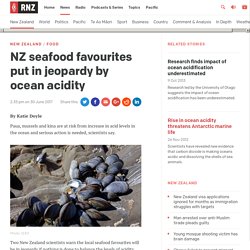 Photo: 123rf Two New Zealand scientists warn the local seafood favourites will be in jeopardy if nothing is done to balance the levels of acidity. Biological sciences doctoral candidate Emily Frost said some species were already experiencing difficulties, and that would worsen as time went on. Higher acid levels can stunt growth and weaken the shells of kina, paua and mussels, while snapper may also be threatened, with acidity resulting in smaller fish and physical deformities. "We will probably start seeing some issues in the next 20-30 years if we don't start reducing the amount of other stresses we are putting on our environment. " Ms Frost said the only way to prevent acid levels from increasing was to reduce carbon emissions. "With the carbon dioxide we are putting into the atmosphere, it is taking it to a level where the spat just don't grow properly. " National Oceanic and Atmospheric Administration, USA (Search within this website)