Pleiadians. Nordic aliens (also known as space brothers) are said by self-described contactees and some UFOlogists to be a group of humanoid extraterrestrials who resemble European racial images, or more specifically Nordic-Scandinavians. 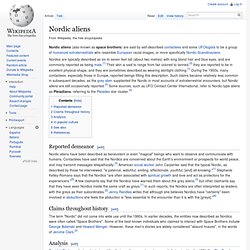 Nordics are typically described as six to seven feet tall (about two metres) with long blond hair and blue eyes, and are commonly reported as being male.[1] Their skin is said to range from fair colored to tanned,[2] they are reported to be in excellent physical shape, and they are sometimes described as wearing skintight clothing.[1] During the 1950s, many contactees, especially those in Europe, reported beings fitting this description. Reported demeanor[edit] Pleiadians. Pleiadians. Nordic Aliens.