Maritime signal flags. English to Pirate Translator. The Pirate Name Generator: Your Pirate Name. School Radio - Treasure Island - Treasure Island. 1: Jim Hawkins and the Admiral Benbow. "How I Became A Pirate" We are the Pirates - Kids Pirate Song. Pirate Facts. Here is a great collection of pirate facts for you: who they were, what they did, where they did it, and how. 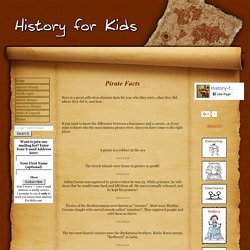 If you want to know the difference between a buccaneer and a corsair, or if you want to know who the most famous pirates were, then you have come to the right place! A pirate is a robber on the sea The Greek Islands were home to pirates in 500BC Julius Caesar was captured by pirates when he was 25. While prisoner, he told them that he would come back and kill them all. Pirates of the Mediterranean were known as "corsairs". The two most feared corsairs were the Barbarossa brothers. Because England and Spain were at war, Queen Elizabeth I encouraged English pirates (called "privateers") like John Hawkins and Francis Drake to attack the Spanish ships. The original buccaneers were drifters and criminals who survived by hunting wild pigs on the island of Cuba. Henry Morgan was a famous buccaneer leader. Buccaneers invented a special kind of sword called a "cutlass" Back Home.

History of Pirates and Fun Facts - History for Kids. What is a Pirate? 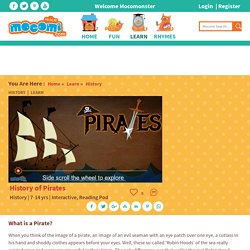 When you think of the image of a pirate, an image of an evil seaman with an eye patch over one eye, a cutlass in his hand and shoddy clothes appears before your eyes. Well, these so-called ‘Robin Hoods’ of the sea really existed once and were very powerful in their times. The only difference was that unlike the real Robin Hood, most of them were extremely ruthless and committed the act of piracy just for their selfish gains. The Brief History of Piracy Piracy began more than 2000 years ago in Ancient Greece, when sea robbers started flocking around the trading routes.

Piracy was at its peak between 1620 and 1720. Privateers were lawful pirates who were permitted by their government to attack and plunder the ships of enemy nations. Famous Pirates Francis Drake was England’s most famous privateer who shared his profits with Elizabeth I, and was knighted for his services. Portside Pirates! Ten facts about Pirates. Pirate Facts For Kids. Blackbeard › Lawless pirates, called buccaneers, attacked Spanish ships and colonies in the Caribbean and Americas. 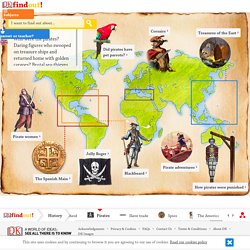 The most blood-curdling pirate of the Caribbean was Blackbeard. Blackbeard › Corsairs › Corsairs were pirates who roamed the Mediterranean Sea between the 12th and 17th centuries. Corsairs › Did pirates have pet parrots? Legends claim that pirates kept parrots on board ships as exotic pets. Did pirates have pet parrots? Jolly Roger › Pirates flew distinctive flags; the most famous was the Jolly Roger. Jolly Roger › Pirate adventures › Stories of daring raids and terrifying attacks on gold-laden ships are popular pirate tales. 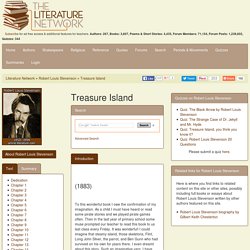 As a child I must have heard or read some pirate stories and we played pirate games often. Then in the last year of primary school some muse prompted our teacher to read this book to us last class every Friday. It was wonderful! I could imagine that steamy island, those skeletons, Flint, Long John Silver, the parrot, and Ben Gunn who had survived on his own for years there. I even dreamt about this story. In an age of declining literacy standards, it is instructive to revisit a work of literature which has done more than almost any other to promote reading among boys. If you are worried about some of the words and the styles of language used, the above paragraph should allay your fears, as there is a small sample there, and even in this very sentence. This is a book that has made history. Fan of this book? Jim's father a pirate?