Era 1920s-1930s. In 1921 Lowry exhibited work alongside two other artists in an architect’s offices in Manchester. 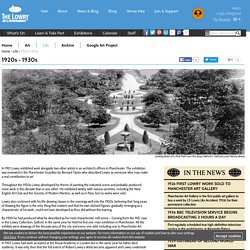 The exhibition was reviewed in the Manchester Guardian by Bernard Taylor who described Lowry as someone who ‘may make a real contribution to art.’ Throughout the 1920s Lowry developed his theme of painting the industrial scene and probably produced more work in this decade than in any other. He exhibited widely with various societies, including the New English Art Club and the Society of Modern Painters, as well as in Paris, but no works were sold. Lowry also continued with his life drawing classes in the evenings well into the 1920s, believing that ‘long years of drawing the figure is the only thing that matters’ and that his own stylised figures, gradually emerging as a characteristic of his work, could not have developed as they did without this training. 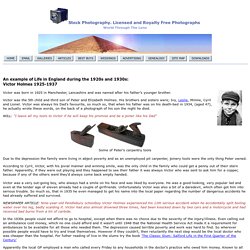 Victor was the 5th child and third son of Peter and Elizabeth Holmes. His brothers and sisters were; Ivy, Leslie, Minnie, Cyril and Lionel. Victor was always his Dad's favourite, so much so, that when his father was on his death-bed in 1934, (aged 47), he actually wrote these words, on the back of a photograph of his son the night he died. WILL: "I leave all my tools to Victor if he will keep his promise and be a joiner like his Dad" Some of Peter's carpentry tools Due to the depression the family were living in abject poverty and as an unemployed pit carpenter, joinery tools were the only thing Peter owned.

According to Cyril, Victor, with his jovial manner and winning smile, was the only child in the family who could get a penny out of their stern father. Thirty fascinating aerial pictures of Salford from the 1920s, 30s and 40s. Salford is the subject of our latest gallery of remarkable pre and post-war aerial photos of the city and its neighbouring towns. 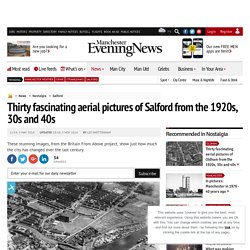 The Britain from Above website features images from the Aerofilms collection, a unique aerial photographic archive of international importance. The collection includes 1.26 million negatives and more than 2,000 photograph albums. We're bringing you a selection of the hundreds of images taken over what is now Greater Manchester between 1919 and 1949 - continuing with this wonderful collection showing how Salford used to look from the skies.