TOXNET. FULL RECORD DISPLAY Displays all fields in the record. 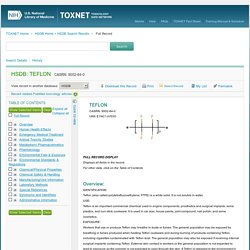 For other data, click on the Table of Contents Overview:IDENTIFICATION: Teflon (also called polytetrafluoroethylene; PTFE) is a white solid. It is not soluble in water. USE: Teflon is an important commercial chemical used in engine components, prosthetics and surgical implants, some plastics, and non-stick cookware. It is used in car wax, house paints, joint compound, nail polish, and some cosmetics. Toxicity Summary: IDENTIFICATION AND USE: Teflon (Polytetrafluoroethylene, or PTFE) is a soft, waxy, milk-white solid, or white powder. Evidence for Carcinogenicity: No data are available in humans.

Human Toxicity Excerpts: /HUMAN EXPOSURE STUDIES/ BACKGROUND: Wound closure by suturing is a critical and significant event in general as well as in oral surgery. Skin, Eye and Respiratory Irritations: There have been reports of "polymer fume fever" in humans exposed to pyrolysis products, which are also irritants. Drug Warnings: Therapeutic Uses: Eva Molina Périz. The Chemistry of Kibble. Despite the cryptic name and anonymous office-park architecture, the nature of the enterprise located at AFB International is clear the moment you sit down for a meeting. 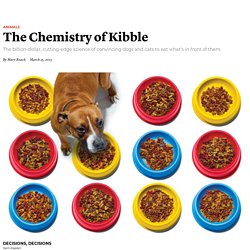 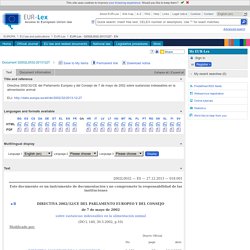 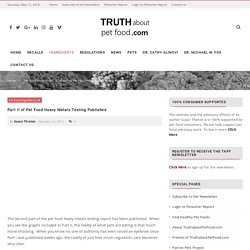 When you see the graphs included in Part II, the reality of what pets are eating is that much more shocking. When you know no one of authority has even raised an eyebrow since Part I was published weeks ago, the reality of just how much regulators care becomes very clear. From the last paragraph of Toxic Trace Metals in Pet Foods Part II, published in the February 2011 Spectroscopy Magazine…“The trace-element data generated in this study have shown that there might be a cause of concern for owners who feed their pets commercially available dog and cat food on a daily basis.” A cause of concern indeed. Lead, Mercury, Arsenic, Cadmium Found In Popular Pet Foods. SAN FRANCISCO (KPIX 5) — There are plenty of regulations intended to keep human food safe, but there are new concerns about pet foods. 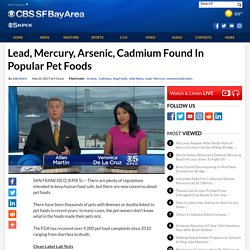 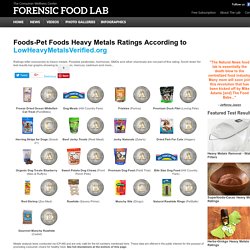 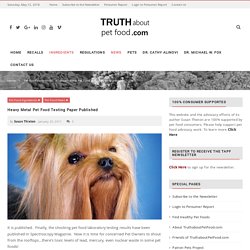 Finally, the shocking pet food laboratory testing results have been published in Spectroscopy Magazine. Now it is time for concerned Pet Owners to shout from the rooftops…there’s toxic levels of lead, mercury, even nuclear waste in some pet foods! Pet Owners now have the published scientific evidence. The published scientific evidence that some commercial pets foods contain a lot more than the advertised choice cuts of meat and fresh vegetables. Some pet foods contain toxic levels of arsenic, lead, mercury, and even nuclear waste. Turesky Article. Dr. Turesky on Cooked Meat Carcinogens. By Dr. 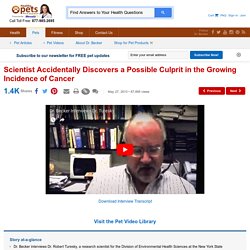 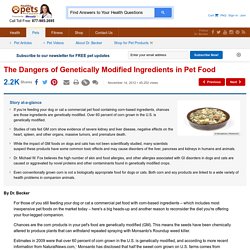 Becker For those of you still feeding your dog or cat a commercial pet food with corn-based ingredients – which includes most inexpensive pet foods on the market today – here's a big heads-up and another reason to reconsider the diet you're offering your four-legged companion.Chances are the corn products in your pet's food are genetically modified (GM). This means the seeds have been chemically altered to produce plants that can withstand repeated spraying with Monsanto's Roundup weed killer.Estimates in 2009 were that over 60 percent of corn grown in the U.S. is genetically modified, and according to more recent information from NaturalNews.com,1 Monsanto has disclosed that half the sweet corn grown on U.S. farms comes from genetically modified seed. 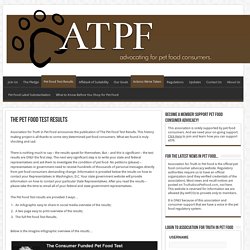 This history making project is all thanks to some very determined pet food consumers. What we found is truly shocking and sad. There is nothing much to say – the results speak for themselves. But – and this is significant – the test results are ONLY the first step. PHD MKI. Petsumer Report – Pet food reviews on over 4,500 cat and dog foods, from pet food consumer advocate Susan Thixton. Glyphosate pathways modern diseases. PetPlate - Did you know your dogs food may not be the only...

Polluted Pets. Palsson e 160225. Trace element concentrations of some pet foods commercially available in Turkey. Accumulation of polychlorinated biphenyls and organochlorine pesticide in pet cats and dogs: assessment of toxicological status. - PubMed - NCBI. Toxic and trace metal concentrations in liver and kidney of dogs. Lead, Cadmium and Other Metals in Serum of Pet Dogs from an Urban Area of NW Poland. How cats and dogs are consuming and processing parabens.

“Parabens and Their Metabolites in Pet Food and Urine from New York State, United States”Environmental Science & Technology Many households can claim at least one four-legged friend as part of the family. But pets that primarily stay indoors can have increased rates of diseases, such as diabetes, kidney diseases and hypothyroidism compared with those that stay exclusively outside. Some scientists propose that chemical substances in the home could contribute to these illnesses. One group has examined how pets could be exposed to parabens, as reported in ACS’ journal Environmental Science & Technology. Analysis of Toxic Trace Metals in Pet Foods Using Cryogenic Grinding and Quantitation by ICP-MS, Part II. This article is the second part of a study that examines pet foods from a variety of sources to determine if there were potentially toxic elements present in the foods and also whether more expensive foods with higher quality ingredients equated to lower levels of toxic elements.

A range of "budget" to "premium" grade pet foods samples were donated by pet owners or purchased in several different stores. The food samples were ground in a cryogenic freezer mill (dry samples) or blender (wet samples) digested with concentrated nitric acid, and analyzed for trace-metals content by inductively couples plasma-mass spectrometry (ICP-MS).

Many of the pet foods sampled showed significant concentrations of various toxic metals. In many cases, the concentrations exceeded the extrapolated human limit values calculated to pet-size dosages.

Hyperthyroidism in Cats: What’s causing this epidemic of thyroid disease and can we prevent it? - Mark Peterson, 2012. Mycotoxins in Pet Food: A Review on Worldwide Prevalence and Preventative Strategies - Journal of Agricultural and Food Chemistry. Citation data is made available by participants in Crossref's Cited-by Linking service. For a more comprehensive list of citations to this article, users are encouraged to perform a search inSciFinder. Benigni A. TembaYasmina SultanbawaDarren J. Multiresidue Analysis of Pesticides in Urine of Healthy Adult Companion Dogs - Environmental Science & Technology. The objective of this study was to determine the background exposures to pesticides as detected in urine from 21 healthy companion dogs in Northern Colorado. A panel of 301 pesticides was used to screen urine samples collected from dogs using an established ultraperformance liquid chromatography–mass spectrometry (UPLC-MS/MS) platform.

Canine food intakes were controlled for one month on diets that were also screened for pesticide contents. Anthropogenic and Naturally Produced Brominated Phenols in Pet Blood and Pet Food in Japan - Environmental Science & Technology. Flame Retardants in the Serum of Pet Dogs and in Their Food - Environmental Science & Technology. Citation data is made available by participants in Crossref's Cited-by Linking service. For a more comprehensive list of citations to this article, users are encouraged to perform a search inSciFinder.

Untitled. Common Toxicologic Issues in Small Animals - Veterinary Clinics: Small Animal Practice. 050519PollutedPetFood. Parabens and Their Metabolites in Pet Food and Urine from New York State, United States - Environmental Science & Technology. The exposure of pets, such as dogs and cats, to a wide range of chemicals present in the indoor environment and the concomitant increase in noninfectious diseases in these companion animals are a concern. Nevertheless, little is known about the sources and pathways of exposure to chemicals in pets. In this study, we determined the concentrations of parabens in commercially available cat and dog foods as well as in urine samples from these pets collected from the Albany area of the state of New York in the United States. Truth about Pet Food – Knowing the truth can save your pet's life. Pet Food Contaminants. Updated 3/23/18 As part of my duties as an AAFCO advisor and member of several Working Groups, I attend numerous webinars and teleconferences.

In one group, the discussion centered around the use of 4D meats and other rotten junk in pet food, and the consensus was that as long as these things are rendered (heat-processed) to kill pathogens, they’re perfectly fine for pet food. DSpace Open Universiteit: Are trends in Human Food reflected in Pet Food Purchase? CAB Direct. Evaluating Pet Foods: How Confident Are You When You Recommend a Commercial Pet Food? - Topics in Companion Animal Medicine.

Endocrine disruptors. Note from DoggyMom: When buying plastic containers for temporary food storage, drink bottles, etc, I always look for “BPA free” labeling. Dirty Dozen Endocrine Disruptors. The High Price of Convenience - Why Feeding That Bag of Pet Food Will Cost You In The Long Run - Dr. Basko -Holistic Veterinarian. 06 Bernhoft. Knize Article. ¿Estás Alimentando a Tu Mascota con Carcinógenos? You’re Not Going to Believe What’s in Your Pet’s Food. The Clean Label Project, which has a stated mission to bring truth and transparency to labeling, recently used an independent third-party analytical chemistry company to test around 900 pet foods and treats for more than 130 different contaminants, from arsenic, cadmium, chromium, lead, and mercury to over 60 pesticide residues. They came up with some disturbing results. Of all the products tested, 75 percent contained more than twice the EPA limit of 10 parts per billion allowed in drinking water for human consumption.