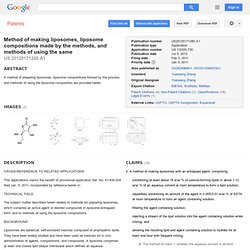 No. 61/430,024 filed Jan. 5, 2011, incorporated by reference herein in. Introduction. Vitamin C - What You Don't Know May Kill You AND Why The USDA Is Wrong. Nutritional Treatment of Heart Disease - Dan Cobb DOM. Let. MONMOUTH JUNCTION, NJ, March 31, 2008 Transave Inc. reported today that its lead product candidate, ARIKACE™ (liposomal amikacin for inhalation), may have the ability to penetrate mucus and biofilms, and decrease the number of Pseudomonas aeruginosa lung infections in patients with cystic fibrosis, according to results of a study published in the Journal of Antimicrobial Chemotherapy. 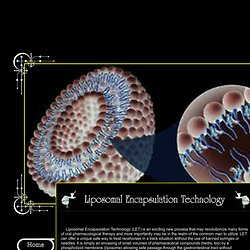 Results of the study titled "Biofilm penetration, triggered release and in vivo activity of inhaled liposomal amikacin in chronic Pseudomanas aeruginosa lung infections," were published in the April issue of the journal. Transave is a biopharmaceutical company focused on the development of next-generation liposomal drug products for inhalation. ARIKACE is a form of the antibiotic amikacin, which is enclosed in nanocapsules of lipids called liposomes. "We know for sure that the liposomes were interacting with, and accumulating in, the biofilm," said Dr. Hickey-Liposomal%20vit%20C.pdf. Liposomal Vitamin “C” Hey, if new to this concept and want the easiest package to get started, just scroll down to the Combo packages. 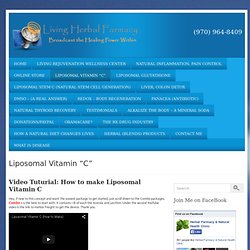 Combo 1 is the best to start with. It contains 1 lb of each the Acerola and Lecithin. Under the second YouTube video is the link to Harbor Freight to get the device. Thank you. Ultrasonic Device (model 3305, harbor freight store, <– click here) Also Note, you can Google and or use Amazon to search for the same product here in the U.S. or Overseas since Harbor freight does not ship internationally. Virtually all vitamin C supplements are actually ascorbic acid (from high fructose corn syrup, corn etc.), potassium ascorbate, magnesium ascorbate and/or calcium ascorbate. 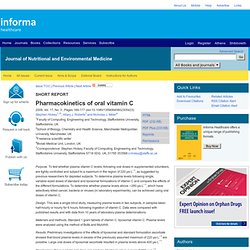 Roberts3 and Nicholas J. US20120171280. Patent WO2012094033A1 - Methods of making liposomes, liposome compositions made by the methods, and ... - Google Patents. [0001] This applications claims the benefit of provisional application serial no, 61/430,024 filed January 5, 2011 , incorporated by reference herein in, [0002] The subject matter described herein relates to methods for preparing liposomes, which comprise an active agent or desired compounds in iiposome- entrapped form, and to methods of using the liposome compositions. 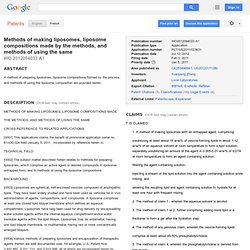 Anti-Aging: New Strategies Are Needed! Cardiologist, Thomas Levy, MD JD, a frequent Vitamin C lecturer and the author of two books on the subject theorizes in his book, Curing the Incurable, that it is likely the human body was not intended to get all its ascorbate (Vitamin C) from dietary sources. 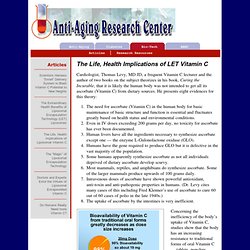 He presents eight evidences for this theory: The need for ascorbate (Vitamin C) in the human body for basic maintenance of basic structure and function is essential and fluctuates greatly based on health status and environmental conditions. Even in IV doses exceeding 200 grams per day, no toxicity for ascorbate has ever been documented. Human livers have all the ingredients necessary to synthesize ascorbate except one — the enzyme L-Gulonolactone oxidase (GLO). Humans have the gene required to produce GLO but it is defective in the vast majority of the population. J.L. Anti-Aging: New Strategies Are Needed! On page 33 of his book, Dr. 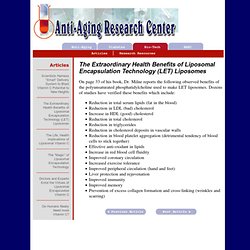 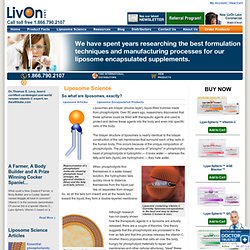 Over 50 years ago, researchers discovered that these spheres could be filled with therapeutic agents and used to protect and deliver these agents into the body and even into specific cells of the body. The bilayer structure of liposomes is nearly identical to the bilayer construction of the cell membranes that surround each of the cells in the human body. This occurs because of the unique composition of phospholipids. The phosphate (source of "phospho" in phospholipid) head of phospholipids is hydrophilic — it loves water — whereas the fatty-acid tails (lipids) are hydrophobic — they hate water.

When phospholipids find themselves in a water-based solution, the hydrophobic tails quickly move to distance themselves from the liquid just like oil separates from vinegar. How to Make Your Own Liposomal Vitamin C. Update 2014-2015: A fellow researcher by the name of Philip provided us with a new way to make accurate liposomal vitamin C every time. 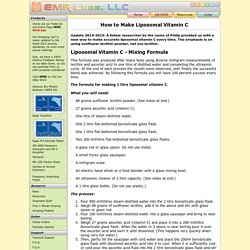 The emphasis is on using sunflower lecithin powder, not soy lecithin. This formula was produced after many tests using diverse milligram measurements of lecithin and ascorbic acid to one litre of distilled water and completing the ultrasonic cycle. At the end of each process the results were observed, until finally the successful blend was achieved. By following this formula you will have 100 percent success every time. The formula for making 1 litre liposomal vitamin C. . · 88 grams sunflower lecithin powder. . · 27 grams ascorbic acid (vitamin C).

Homemade (With ultrasound) Liposomal-Encapsulated Vit C has 5X oral effectiveness and faster delivery into tissue-bed than Vit C via IV! at Ask Trapper, topic 1554526. Hello Forumfolk, I think this is information is of interest to probably every human being on the planet. 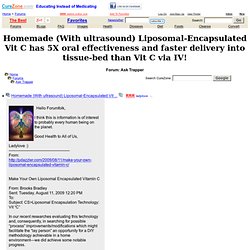 Liposome. Liposomes are composite structures made of phospholipids and may contain small amounts of other molecules. Though liposomes can vary in size from low micrometer range to tens of micrometers, unilamellar liposomes, as pictured here, are typically in the lower size range with various targeting ligands attached to their surface allowing for their surface-attachment and accumulation in pathological areas for treatment of disease.[1] The major types of liposomes are the multilamellar vesicle (MLV), the small unilamellar vesicle (SUV), the large unilamellar vesicle (LUV), and the cochleate vesicle.[3] Liposomes should not be confused with micelles and reverse micelles composed of monolayers.[4] Discovery[edit] Liposomes were first described by British haematologist Alec D Bangham[5][6][7] in 1961 (published 1964), at the Babraham Institute, in Cambridge.

Mechanism[edit] Alec Douglas Bangham. Haematologist and inventor of liposomes. Born in Manchester, UK, on Nov 10, 1921, he died in Great Shelford, UK, on March 9, 2010. It was in the 1950s that Alec Bangham developed an interest in cell membranes, but another decade before he made his key discovery that phospholipid molecules dispersed in water could organise themselves into double layers resembling these membranes. At the Institute of Animal Physiology in Babraham near Cambridge where he worked, the electron microscope revealed that the dispersions took the form of cell-sized closed vesicles.

Here, Bangham suspected, was a model for studying membranes—and also perhaps a vehicle for delivering drugs and other materials to the cell. Both possibilities were to be realised. With colleagues Jeff Watkins and Malcolm Standish he wrote the 1965 paper that effectively launched the liposome “industry”. From “Banghasomes” to liposomes: A memoir of Alec Bangham, 1921–2010. David W. Deamer 1 + Author Affiliations 1 Correspondence: E-mail: deamer@soe.ucsc.edu “it was the odd pattern of a well-drawn drop of blood that initiated my curiosity and eased my career away from morbid anatomy to that of the physical chemistry of cell surfaces (1)⇓ .”

A few individuals change the course of a scientific life if one is fortunate enough to work with them. ‎www.ccphchicago.com/wp-content/uploads/2013/09/Making_Liposomal_Vitamin_C.pdf.