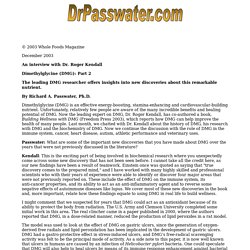 Roger Kendall Dimethylglycine (DMG): Part 2 The leading DMG researcher offers insights into new discoveries about this remarkable nutrient. By Richard A. Passwater, Ph.D. 10. Glycine: a new anti-inflammatory immunonutrient. Glycine as a potent anti-angiogenic nutrient for tumor growth. Glycine, The Most Important Inflammation Regulator - The Gut Health Protocol. While researching enteritis (inflammation of the small intestine) I came across some very interesting research on an amino acid called glycine. 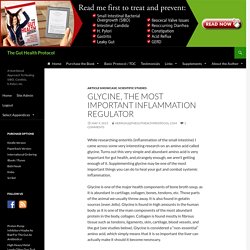 Turns out this very simple and abundant amino acid is very important for gut health, and,strangely enough, we aren’t getting enough of it. Supplementing glycine may be one of the most important things you can do to heal your gut and combat systemic inflammation. Glycine, The Most Important Inflammation Regulator - The Gut Health Protocol. Glycine - MOTM 2010 - HTML-only version. It's an amino acid, right? 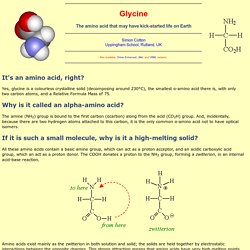 Yes, glycine is a colourless crystalline solid (decomposing around 230°C), the smallest α-amino acid there is, with only two carbon atoms, and a Relative Formula Mass of 75. Why is it called an alpha-amino acid? The amine (NH2) group is bound to the first carbon (αcarbon) along from the acid (CO2H) group. And, incidentally, because there are two hydrogen atoms attached to this carbon, it is the only common α-amino acid not to have optical isomers. If it is such a small molecule, why is it a high-melting solid?

All these amino acids contain a basic amine group, which can act as a proton acceptor, and an acidic carboxylic acid group, which an act as a proton donor. Amino acids exist mainly as the zwitterion in both solution and solid; the solids are held together by electrostatic interactions between the opposite charges. The zwitterion has groups that can be protonated or deprotonated; they can accept or donate protons by changing the pH. Exactly. Very good. What? One of the most common amino acids found in human proteins. Research ✔ Amongst the 22 amino acids vital for our body to function and manufacture proteins, glycine is the smallest and simplest, with only a single hydrogen forming its side chain. 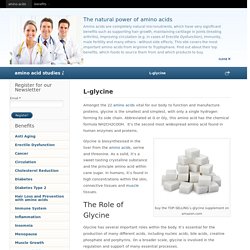 Abbreviated at G or Gly, this amino acid has the chemical formula NH2CH2COOH. It’s the second most widespread amino acid found in human enzymes and proteins. buy the TOP-SELLING L-glycine supplement on amazon.com Glycine is biosynthesised in the liver from the amino acids, serine and threonine. As a solid, it’s a sweet tasting crystalline substance and the principle amino acid within cane sugar. Glycine has several important roles within the body. Valtsu's: Health Benefits of Glycine. 1. 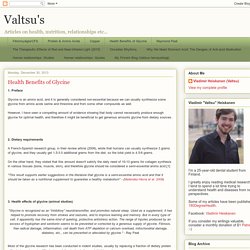 Preface Glycine is an amino acid, and it is generally considered non-essential because we can usually synthesize some glycine from amino acids serine and threonine and from some other compounds as well. However, I have seen a compelling amount of evidence showing that body cannot necessarily produce enough glycine for optimal health, and therefore it might be beneficial to get generous amounts glycine from dietary sources. 2. Dietary requirements. Welcome to Natural Food Science, LLC, maker of the anti inflammatory drink Proglyta, it makes any diet an anti-inflammatory diet! Proglyta. Sweetamine, the new Anti Inflammation Diet Sweetener from the makers of Proglyta Sweetamine. Pocket: Log In. Glutathione Synthesis Is Diminished in Patients With Uncontrolled Diabetes and Restored by Dietary Supplementation With Cysteine and Glycine. 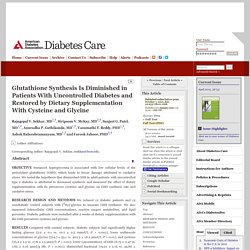 Sekhar, rsekhar@bcm.edu. Abstract OBJECTIVE Sustained hyperglycemia is associated with low cellular levels of the antioxidant glutathione (GSH), which leads to tissue damage attributed to oxidative stress. We tested the hypothesis that diminished GSH in adult patients with uncontrolled type 2 diabetes is attributed to decreased synthesis and measured the effect of dietary supplementation with its precursors cysteine and glycine on GSH synthesis rate and oxidative stress. RESEARCH DESIGN AND METHODS We infused 12 diabetic patients and 12 nondiabetic control subjects with [2H2]-glycine to measure GSH synthesis.

CONCLUSIONS Patients with uncontrolled type 2 diabetes have severely deficient synthesis of glutathione attributed to limited precursor availability. Diabetes is the leading worldwide cause of blindness, end-stage renal disease, and amputations. All patients received diabetic management from their primary physicians. Statistics. The cardiometabolic benefits of glycine: Is glycine an ‘antidote’ to dietary fructose? + Author Affiliations Correspondence to Dr James J DiNicolantonio; jjdinicol@gmail.com Vascular protective properties of supplemental glycine From the standpoint of vascular health, a recent report that glycine can stabilise platelets is of evident interest.7 When rats were fed diets containing 2.5–5% glycine, bleeding time approximately doubled, and the amplitude of platelet aggregation in whole blood triggered by ADP or collagen was halved. 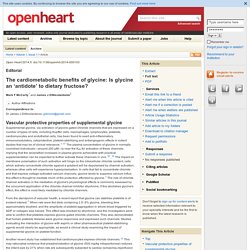 This effect was blocked by strychnine, and the investigators were able to confirm that platelets express glycine-gated chloride channels. They also demonstrated that human platelets likewise were glycine responsive and expressed such channels. Glycine is a biosynthetic precursor for creatine, haeme, nucleic acids and the key intracellular antioxidant glutathione.

Natural Medicines Comprehensive Database. Glycine and cancer. Comment from Martin Tornberg: “One thing that gives me pause with respect to consuming too much glycine is the study on that “identified glycine consumption and expression of the mitochondrial glycine biosynthetic pathway as strongly correlated with rates of proliferation across cancer cells” and noted that “Antagonizing glycine uptake and its mitochondrial biosynthesis preferentially impaired rapidly proliferating cells.”While this may be of primary concern to cancer patients (who might therefore be well advised to limit both glycine and methionine, which basically means sticking to a low protein diet), it may also be relevant for any of us who feel we might be at risk of cancer and might have small amounts of cancer cells in our bodies that are not yet large enough to form a tumor but that we don’t want to feed. 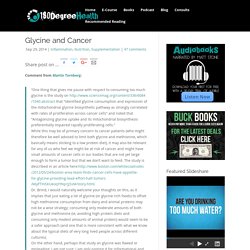 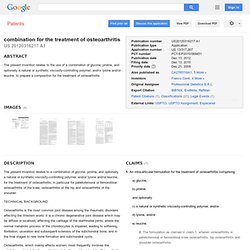 Osteoarthritis is the most common joint disease among the rheumatic disorders affecting the Western world. It is a chronic degenerative joint disease which may be diffuse or localised, affecting the cartilage of the diarthrodial joints, where the normal metabolic process of the chondrocytes is impaired, leading to softening, fibrillation, ulceration and subsequent sclerosis of the subchondral bone, and in the final stages to new bone formation and subchondral cysts. Osteoarthritis, which mainly affects women, most frequently involves the patellofemoral joint, the femorotibial joint, the hip and the shoulder. Glycine Supplement Helps Prevent Degenerative Diseases Such As Arthrosis Or Osteoporosis.