Whey protein Dosing. The below doses are based on scientific research, publications, traditional use, or expert opinion. 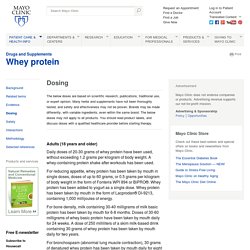 Many herbs and supplements have not been thoroughly tested, and safety and effectiveness may not be proven. Brands may be made differently, with variable ingredients, even within the same brand. The below doses may not apply to all products. You should read product labels, and discuss doses with a qualified healthcare provider before starting therapy.

Adults (18 years and older) Daily doses of 20-30 grams of whey protein have been used, without exceeding 1.2 grams per kilogram of body weight. 22217webtoc. 5 proven benefits of colostrum. Immunomodulatory effects of lactoferrin. Cytokines and Canine Nutrition Greco. Colostrum is a proven, effective immune system booster. Soon after giving birth, female mammals produce colostrum, which is a milk-like substance that jump-starts a newborn's immune system. 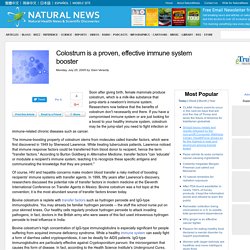 Researchers now believe that the benefits of colostrum don't necessarily end there. If you have a compromised immune system or are just looking for a boost to your healthy immune system, colostrum may be the jump-start you need to fight infection or immune-related chronic diseases such as cancer. The immune-boosting property of colostrum stems from molecules called transfer factors, which were first discovered in 1949 by Sherwood Lawrence. While treating tuberculosis patients, Lawrence noticed that immune response factors could be transferred from blood donor to recipient, hence the term "transfer factors. " According to Burton Goldberg in Alternative Medicine, transfer factors "can 'educate' or modulate a recipient's immune system, teaching it to recognize these specific antigens and communicating the knowledge that they are present. " 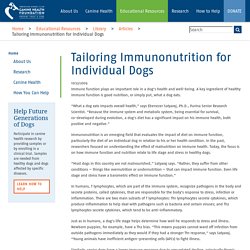 A key ingredient of healthy immune function is good nutrition, or simply put, what a dog eats. “What a dog eats impacts overall health,” says Ebenezer Satyaraj, Ph.D., Purina Senior Research Scientist. “Because the immune system and metabolic system, being essential for survival, co-developed during evolution, a dog’s diet has a significant impact on his immune health, both positive and negative.”

Immunonutrition is an emerging field that evaluates the impact of diet on immune function, particularly the diet of an individual dog in relation to his or her health condition. In the past, researchers focused on understanding the effect of malnutrition on immune health. “Most dogs in this country are not malnourished,” Satyaraj says. Just as in humans, a dog’s life stage helps determine how well he responds to stress and illness. 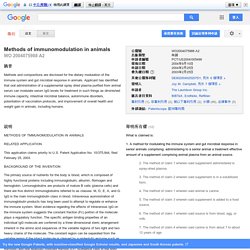 Patent Application No. 10/375,844, filed February 25, 2003. The primary source of nutrients for the body is blood, which is composed of highly functional proteins including immunoglobulin, albumin, fibrinogen and hemoglobin. Lnmunoglobulins are products of mature B cells (plasma cells) and there are five distinct immunoglobulins referred to as classes: M, D, E, A, and G. IgG is the main immunoglobulin class in blood. Intravenous aώmnistration of immunoglobulin products has long been used to attempt to regulate or enhance the immune system. IgG appears to be involved in the regulation of both allergic and autoimmune reactions. 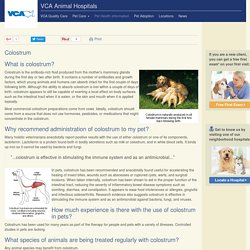 Colostrum is the antibody-rich fluid produced from the mother's mammary glands during the first day or two after birth. It contains a number of antibodies and growth factors, which young animals and humans can absorb intact for the first couple of days following birth. Although the ability to absorb colostrum is lost within a couple of days of birth, colostrum appears to still be capable of exerting a local effect on body surfaces such as the intestinal tract when it is eaten, or the skin and mouth when it is applied topically. Most commercial colostrum preparations come from cows. Colostrum for Dogs and Cats Dosage. Determining the dosage of colostrum for your dog or cat is not an exact science. 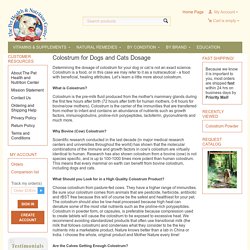 Colostrum is a food, or in this case we may refer to it as a nutraceutical - a food with beneficial, healing attributes. Let’s learn a little more about colostrum. What is Colostrum? Colostrum is the pre-milk fluid produced from the mother's mammary glands during the first few hours after birth (72 hours after birth for human mothers, 0-8 hours for bovine/cow mothers). Dogs Naturally Magazine » COLOSTRUM FOR DOG ALLERGIES.

Allergy symptoms occur when the immune system overreacts to the presence of a substance (an allergen) that’s not normally considered to be of danger to the body. 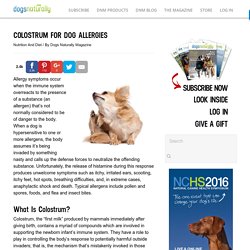 When a dog is hypersensitive to one or more allergens, the body assumes it’s being invaded by something nasty and calls up the defense forces to neutralize the offending substance. Pediatric Research - Abstract of article: Colostrum-Induced Enteric Mucosal Growth in Beagle Puppies.