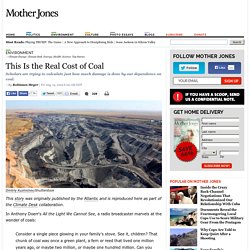 In Anthony Doerr's All the Light We Cannot See, a radio broadcaster marvels at the wonder of coals: Consider a single piece glowing in your family's stove. See it, children? That chunk of coal was once a green plant, a fern or reed that lived one million years ago, or maybe two million, or maybe one hundred million. Can you imagine one hundred million years? Hundred-million year-old sunlight has heated our homes and powered our factories for decades. But damage to the climate is not the end of coal's costs. They looked at everything: the damage to the climate, to people's health, and to the plants and animals around the mines. One study estimated the full public health cost of coal, in Appalachia alone, at $74.6 billion. 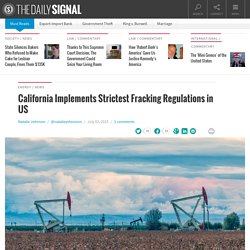 The regulations force increased transparency and accountability through expanded monitoring and reporting of air and water quality, public disclosure of chemicals used in fracking procedures, and estimates of the environmental impact fracking activities may cause. The state legislature originally approved the rules in 2013, but Wednesday’s enactment formally cemented the sweeping regulations. In addition to the vast information required for public release, the new rules also extend permit requirements, creating additional costs for potential frackers. Oil companies must notify neighbors of fracking sites and provide them with permits. After notification, the nearby property owners can subsequently request for a contractor to come test the water. 7 Facts That Prove the Renewable Energy Revolution Has Arrived. 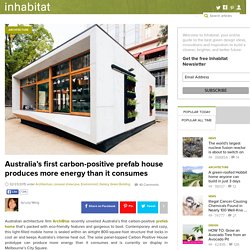 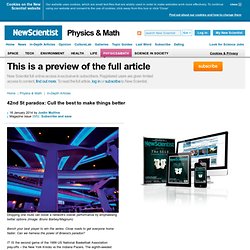 Close roads to get everyone home faster. Global energy meet highlights challenge of growing demand. The challenge of providing sustainable energy to a growing global population at a minimal environmental impact dominated debate at the World Energy Congress on Monday. 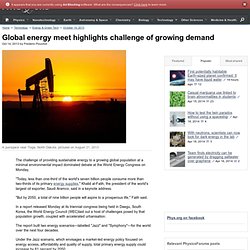 "Today, less than one-third of the world's seven billion people consume more than two-thirds of its primary energy supplies," Khalid al-Falih, the president of the world's largest oil exporter, Saudi Aramco, said in a keynote address. "But by 2050, a total of nine billion people will aspire to a prosperous life," Falih said. In a report released Monday at its triennial congress being held in Daegu, South Korea, the World Energy Council (WEC)laid out a host of challenges posed by that population growth, coupled with accelerated urbanisation.

IEA World Outlook: Six Key Trends Shaping the Energy Future. Thomas K. Grose Thanks to "fracking," the United States is reaching the top spot among world oil producers sooner than expected, and is "well on its way to realizing the American dream" of energy independence, the International Energy Agency (IEA) said Tuesday. "But this does not mean that the world is on the cusp of a new era of oil abundance," the IEA warned in its closely watched annual World Energy Outlook.

Instead, the agency predicted that no other country will replicate the United States' success with hydraulic fracturing and other unconventional technologies that have led to the North American boom in oil and natural gas production. Paper Generators: Harvesting Energy from Touching, Rubbing & Sliding. Berliners' co-op aims to take over and run electricity grid of city. Arwen Colell was cycling down a Berlin street one afternoon when a friend from her choir group called her and said: "We should buy the electrical grid. 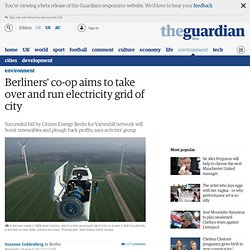 " The idea was not out of the blue. Germany's energy transition, from nuclear and fossil fuels to renewables, has lined rooftops with solar panels. But it was another ambition to run Berlin's distribution network. Colell did not hesitate. "We should definitely do it," she said. Since that conversation in 2011, Colell and her friend, who are in their mid-20s, have built a movement aimed at putting the city grid under citizens' control when the system goes on sale next year. 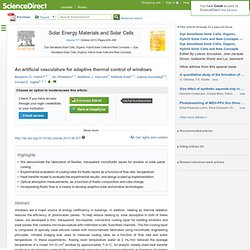 Experimental evaluation of cooling rates for fluidic layers as a function of flow rate, temperature. Heat transfer model to evaluate the experimental results, and design scaled up implementation. Optical absorption measurements, as a function of fluidic composition and color change. Incorporating fluidic flow is a means to develop adaptive solar and window technologies. New Lens Scenarios.

The era of energy dinosaurs is coming to an end. Working in clean energy can be frustrating. 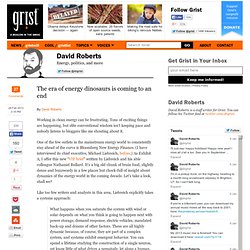