Autonomous cars start to take shape. We've heard a lot of chatter about autonomous vehicles over the past several years and seen a variety of hardware. 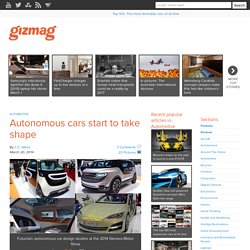 So far, most autonomous cars are rough, experimental versions of current models, with all kinds of added sensor hardware. The recent Geneva Motor Show flipped the autonomous vehicle inside out, showcasing several futuristic design studies that peeked inside the car cabin of the future. View all The new Link & Go 2.0 from AKKA Technologies is an evolution of the original Link & Go from last year's Geneva show. The first Link & Go laid the technological groundwork for AKKA's autonomous vision, focusing entirely on the car itself. Last year's 11.8-ft-long (3.6-m) Link & Go was powered by two rear-mounted 28-kW electric motors and was able to navigate autonomously with the help of GPS, SLAM (simultaneous localization acquisition and mapping), LiDAR, stereo cameras and other sensors.

Sources: AKKA, Rinspeed Share. Singapore. What Is BMW Connected Drive? Innovation and BMW are fast friends with a long history. 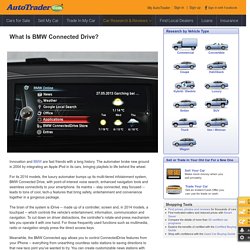 The automaker broke new ground in 2004 by integrating an Apple iPod in its cars, bringing playlists to life behind the wheel. For its 2014 models, the luxury automaker bumps up its multi-tiered infotainment system, BMW Connected Drive, with point-of-interest voice search, enhanced navigation tools and seamless connectivity to your smartphone. Its mantra -- stay connected, stay focused -- leads to tons of cool, tech-y features that bring safety, entertainment and convenience together in a gorgeous package. BMW says ‘no thanks’ to tech companies asking for its connected car data. BMW refuses to yield to tech and advertising firms that are eyeing up the carmaker's connected car data, it revealed during the Detroit Motor Show. 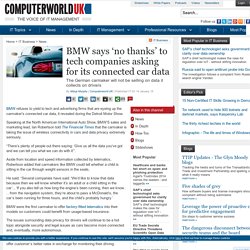 Speaking at the North American International Auto Show, BMW’S sales and marketing lead, Ian Robertson told The Financial Times that the carmaker is taking the issue of wireless connectivity in cars and data privacy extremely seriously. Mercedes Gets Personal With Mercedes.ME. A sleek, engaging design.

A clear message that resonates with visitors, and promises to turn customers into a community. A tailored, hand-written font used to emphasize the word “me” and underscore the personalized experience that is at the very core of this new service. Mercedes-Benz, whose motto is “The best or nothing,” just got personal – and at the center of this transformation stands a .me domain: Mercedes.Me “Mercedes me” is a brand new digital platform by the Stuttgart-based premium automotive manufacturer Mercedes-Benz, scheduled to launch in Summer 2014.

Presented in early March at the 84th International Motor Show in Geneva, “Mercedes me” promises to redefine customer care in the automotive industry – and beyond – by seamlessly integrating all service and mobility areas in a single digital space. Applications of AI. Google’s Self-Driving Cars Still Face Many Obstacles. Would you buy a self-driving car that couldn’t drive itself in 99 percent of the country? 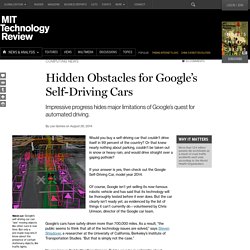 Or that knew nearly nothing about parking, couldn’t be taken out in snow or heavy rain, and would drive straight over a gaping pothole? If your answer is yes, then check out the Google Self-Driving Car, model year 2014. Of course, Google isn’t yet selling its now-famous robotic vehicle and has said that its technology will be thoroughly tested before it ever does. But the car clearly isn’t ready yet, as evidenced by the list of things it can’t currently do—volunteered by Chris Urmson, director of the Google car team.

Google’s cars have safely driven more than 700,000 miles. The Future of A.I. and Cars. Google has won the right to operate an autonomous Toyota Prius on the streets of Nevada, marking another major step in what is becoming a relentless march toward the driverless cars of the future. 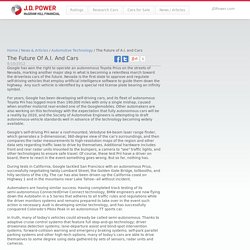 Nevada is the first state to approve and regulate self-driving vehicles that employ artificial intelligence software to guide them down the highway. Any such vehicle is identified by a special red license plate bearing an infinity symbol. How Artificial Intelligence Is Transforming The Auto Industry - TechDrive - The Latest In Tech & Transport. Simon Montford is the founder of web3iot.com and 5350.co.uk. 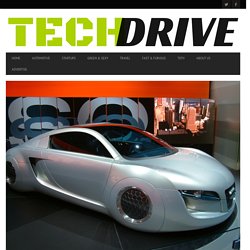 He writes about anything relating to the Internet of Things including drones, wearables and connected devices. It is tempting to hurl insults at your car when it does something to annoy you, like breakdown when you’re late for a meeting, but one day your car may have the intelligence to respond! This is not a scene from the movie “Herbie Goes Bananas”, it’s the future of personal transportation. This is because your future vehicle will very likely have advanced artificial intelligence (A.I) baked in. This newly acquired intelligence, acting like a brain and central nervous system, will enable vehicles to self-drive, self-park and potentially even self-heal. The Three Breakthroughs That Have Finally Unleashed AI on the World. Artificial Intelligence Startups.