Weightlift Fitness is a weekly updated, article-focused blog in the categories of fitness, nutrition, and exercise. We are glad to be here on pearltrees.com!

That Guy in the Gym: Fitness Clichés and Archetypes. You want a list of “types of guys in the gym”? 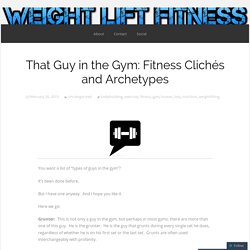 It’s been done before. But I have one anyway. And I hope you like it. Here we go: Grunter: This is not only a guy in the gym, but perhaps in most gyms, there are more than one of this guy. Bearded lifters are strong because of their beards. The Beard Guy: Briefly, at least since the 1960’s, the beard was seen as an indicator of laziness. The Unsolicited Advisor: The unsolicited advisor is everywhere in society. The Form Patrol: Members of the form patrol are especially frequent on the internet, but they are also in the gym. The Conformist: The conformist is afraid to go out of his comfort zone and does what he is expected to do in the gym. Bodybuilder Kid: Usually a guy in his late teens or early twenties. The Barbarian: Often tracks Mud into the gym and rides giant cats in the squat rack. What Is Strength Training? - Ground Up Strength.

Posted on February 22 2015 Strength training is actually simpler than you thought. 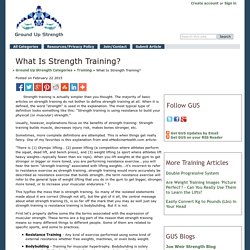 First let's properly define some the the terms associated with the expression of muscular strength. Citations 1. Fitness Myths: Supplements Don’t Work. We’re going to switch things over this time and talk about supplements. 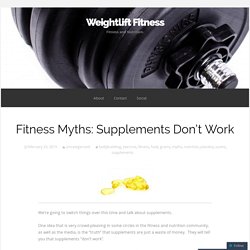 One idea that is very crowd-pleasing in some circles in the fitness and nutrition community, as well as the media, is the “truth” that supplements are just a waste of money. They will tell you that supplements “don’t work”. Here are some of the reason some nutritionists and fitness gurus will tell you about supplements: 1. The Benefits of Full Body Compound Workouts. This week at Weightlift Fitness, we are talking about full body routines. 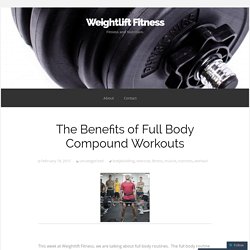 The full body routine is a workout that focuses on large muscle groups for upper and lower body, rather than isolation exercises. But first, let’s briefly summarize what a full body routine is, so that we know exactly what type of workout we are discussing: What Makes up a Full Body Routine? Full body workouts usually share the following qualities: Ignoring Exercise May Be Twice as Lethal as Obesity. Lack of exercise may be responsible for twice as many deaths as obesity, according to a study showing the benefits of as little as 20 minutes of brisk walking a day. 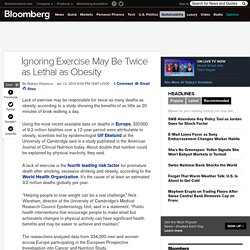 Using the most recent available data on deaths in Europe, 337,000 of 9.2 million fatalities over a 12-year period were attributable to obesity, scientists led by epidemiologist Ulf Ekelund at the University of Cambridge said in a study published in the American Journal of Clinical Nutrition today. About double that number could be explained by physical inactivity, they said. A lack of exercise is the fourth leading risk factor for premature death after smoking, excessive drinking and obesity, according to the World Health Organization. It’s the cause of at least an estimated 3.2 million deaths globally per year. “Helping people to lose weight can be a real challenge,” Nick Wareham, director of the University of Cambridge’s Medical Research Council Epidemiology Unit, said in a statement. Overtraining: 5 Signs You Might Be Working Out Too Much. This week, we have been discussing overtraining. 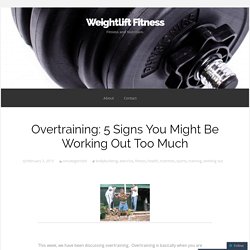 Overtraining is basically when you are exercising beyond to the point where the workout becomes stressful on particular cells and hormones in the body, rather than beneficial. The solutions to this are periodization, cycling your workouts so that you have rest days, are not over-working a muscle group, and, of course, rest, where anabolism, recovery, and other benefits of working out, truly happen. How to Build Muscle Fast. Want Big Arms? Use Compound Exercises and the Full Body Routine for Lagging Muscles. These are not the solution for big arms. 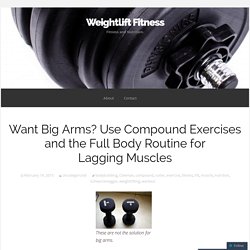 Okay, it’s been a while, so this week, we are kicking things off with talking about the full body routine, which typically consists of compound exercises (that work several muscle groups as opposed to one or a couple) are actually better for bigger arms than isolation, especially if you are somewhat new to weightlifting. Now, I don’t like having a title for a post/article that asks whether you want big arms. It’s hard to do that without sounding like a late-night infomercial. But, I thought it fits, because it is a rhetorical: of course you want big arms.

One thing that can really affect novices in weight-training is to become too bodybuilding-minded about muscles. You started weight training a few months ago, and you’re introducing more isolation exercises because your lats or biceps are too small, or lagging behind one of your other muscle groups. So, if it bothers you that much, I’m going to give you five solutions for your lagging bodyparts. 1.