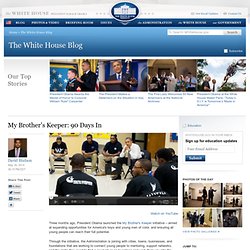 Through the initiative, the Administration is joining with cities, towns, businesses, and foundations that are working to connect young people to mentoring, support networks, and the skills they need to find a good job or go to college and work their way into the middle class. One Key to Success: A Belief in a Future. CHICAGO — Tim Jackson’s job is to convince young people that they have a stake in the future. 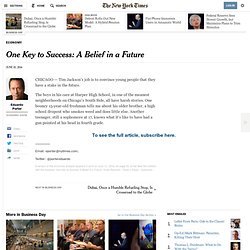 The boys in his care at Harper High School, in one of the meanest neighborhoods on Chicago’s South Side, all have harsh stories. One bouncy 15-year-old freshman tells me about his older brother, a high school dropout who smokes weed and does little else. Another teenager, still a sophomore at 17, knows what it’s like to have had a gun pointed at his head in fourth grade. Almost half the students who enroll at Harper drop out within five years, one of the highest rates in the city.

My Brother's Keeper. He's announced a new initiative with leading foundations and businesses that will take a collaborative, multi-disciplinary approach to build ladders of opportunity and unlock the full potential of boys and young men of color — and they're getting to work immediately. 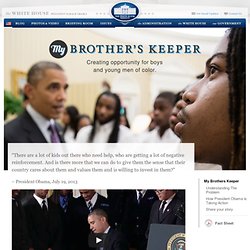 He signed a Presidential Memorandum establishing the My Brother's Keeper Task Force to help determine which public and private efforts are working, how the Federal government can support those efforts, and how we can get more folks involved in those efforts across the board. That doesn't only benefit our kids facing tough circumstances — it benefits all Americans. Read the Presidential Memorandum here. One Key to Success: A Belief in a Future. Creating and Expanding Ladders of Opportunity for Boys and Young Men of Color. The White House Office of the Press Secretary For Immediate Release February 27, 2014. 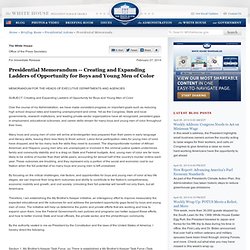 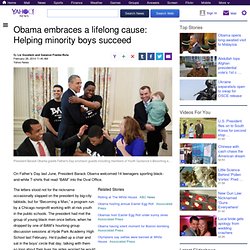 The letters stood not for the nickname occasionally slapped on the president by big-city tabloids, but for “Becoming a Man,” a program run by a Chicago nonprofit working with at-risk youth in the public schools. The president had met the group of young black men once before, when he dropped by one of BAM’s hourlong group discussion sessions at Hyde Park Academy High School last February.

Obama kicks off outreach to young men of color. President Obama launched his boldest efforts yet to remedy the dismal plight of young minority men and boys on Thursday, delivering a very personal message in which he urged Americans of all races and political affiliations to help create stronger pathways to success for this historically marginalized group. 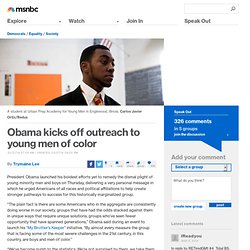 “The plain fact is there are some Americans who in the aggregate are consistently doing worse in our society, groups that have had the odds stacked against them in unique ways that require unique solutions, groups who’ve seen fewer opportunity that have spanned generations,” Obama said during an event to launch his “My Brother’s Keeper” initiative. “By almost every measure the group that is facing some of the most severe challenges in the 21st century, in this country, are boys and men of color.”

“We’ve become numb to the statistics. We’re not surprised by them, we take them as the norm. “I made bad choices. New initiative addresses issues of young black and Hispanic men by WBEZ's Morning Shift. David Remnick: On and Off the Road with Barack Obama. On the Sunday afternoon before Thanksgiving, Barack Obama sat in the office cabin of Air Force One wearing a look of heavy-lidded annoyance. 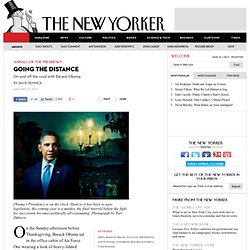 The Affordable Care Act, his signature domestic achievement and, for all its limitations, the most ambitious social legislation since the Great Society, half a century ago, was in jeopardy. His approval rating was down to forty per cent—lower than George W. Bush’s in December of 2005, when Bush admitted that the decision to invade Iraq had been based on intelligence that “turned out to be wrong.” Also, Obama said thickly, “I’ve got a fat lip.” That morning, while playing basketball at F.B.I. headquarters, Obama went up for a rebound and came down empty-handed; he got, instead, the sort of humbling reserved for middle-aged men who stubbornly refuse the transition to the elliptical machine and Gentle Healing Yoga. How should the U.S. improve opportunity for young men of color? GWEN IFILL: Leaders from the corporate, philanthropic, arts, faith and sports worlds gathered at the White House today to address a single issue: the challenges facing young men and boys of color. 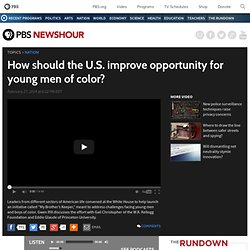 The issue has become a key priority for the president. PRESIDENT BARACK OBAMA: The bottom line is, Michelle and I want every child to have the same chance this country gave us. GWEN IFILL: When President Obama uttered these words during his State of the Union address, this is who he had in mind. Fathers’ Sons and Brothers’ Keepers. Frederick Douglass once noted, “It is easier to build strong children than to repair broken men.” 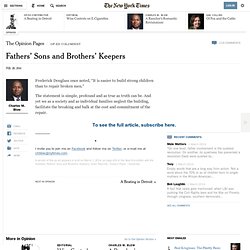 The statement is simple, profound and as true as truth can be. And yet we as a society and as individual families neglect the building, facilitate the breaking and balk at the cost and commitment of the repair. My Brother's Keeper. Why Are Minority Girls More Likely Than Boys to Graduate High School and Attend College? He immigrated to the United States from Ethiopia as a 10-year-old and now lives with his parents and three younger sisters in an apartment in the city. 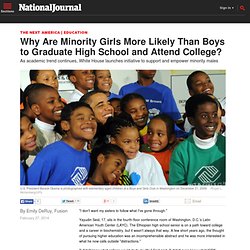 His mother, he said, is always "so proud" to hear about someone succeeding in college, but she and her husband aren't in a position to help their children navigate the complicated college application process. It's not something either of his parents are familiar with and they're both busy working caretaker jobs to support the family. That's where the LAYC stepped in. Seid heard about the youth center from a friend and was hooked after attending a Christmas party several years ago. Now, he's part of several programs the center runs to help young people succeed.

President Obama Speaks on the My Brother's Keeper Initiative. In Chicago, Obama talks about ‘the work that remains unfinished’ President Barack Obama returned to the South Side of Chicago on Friday, bringing a message of hope and resilience in the face of the rising, demoralizing gun violence that has plagued his hometown. “No laws or set of laws can prevent every senseless act of violence,” President Obama told an audience of hundreds at Hyde Park Academy. “When a child opens fire on another child, there’s a hole in that child’s heart that government can’t fill, only community and parents and teachers and clergy can fill that hole.”

In Chicago last year, 65 children were killed by gun violence: in other words, the equivalent of a Newtown-level massacre occurring every four months. Obama embraces a lifelong cause: Helping minority boys succeed. Obama in Chicago exhorts `ladders of opportunity` CHICAGO (FOX 32 News) - Pressing his case in the town that launched his political career, President Barack Obama called Friday for the government to take an active, wide-ranging role in ensuring every American has a "ladder of opportunity" into the middle class. Speaking at Hyde Park Academy in Chicago, Obama sough support for proposals, unveiled this week in his State of the Union address, to increase the federal minimum wage and ensure every child can attend preschool. He also pitched plans to pair businesses with recession-battered communities to help them rebuild and provide job training. "In too many neighborhoods today, whether here in Chicago or in the farthest reaches of rural America, it can feel like for a lot of young people the future only extends to the next street corner or the outskirts of town, that no matter how much you work or how hard you try, your destiny was determined the moment you were born," Obama said.

"I had issues, too, when I was their age. Obama wraps State of Union speech tour in Chicago. Returning to the South Side of Chicago, President Barack Obama allayed critics who called on him to address gun violence in his hometown by identifying economic opportunities and strong families as the key to combat crime. “We’ve got to grow our economy and create more good jobs. It means we’ve got to equip every American with the skills and the training to fill those jobs. And it means we’ve got to rebuild ladders of opportunity for everybody willing to climb it.

And that starts at home. There’s no more important ingredient for success, nothing that would more important for us reducing violence than strong stable families, which means we should do more to promote marriage and encourage fatherhood,” Obama said Friday afternoon at Hyde Park Academy in the Woodlawn neighborhood. Since his State of the Union address on Tuesday, Obama has been giving stump speeches around the country about growing the middle class, all while pushing for new gun control legislation as well.

Obama Chicago visit. How to Involve the Kids in Passover The Jewish holiday of Passover begins next Monday evening with the Seder, a ritual feast. Friends and family gather together to retell the story of the liberation of the Israelites from slavery in ancient Egypt. Obama on guns Chicago, "the equivalent of a Newtown every four months" Transcript. Obama: Overcoming poverty and violence hard, but can be done. President Obama addresses 'gun violence' in Chicago, urging Congress to act now (Photos) - National White House Press.