TOKYO MAP. Tokyo Map shows 1067 points of interest in and around Tokyo. 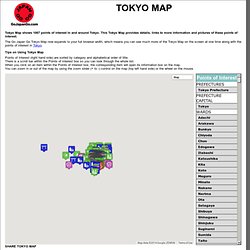 This Tokyo Map provides details, links to more information and pictures of these points of interest. The Go Japan Go Tokyo Map now expands to your full browser width, which means you can see much more of the Tokyo Map on the screen at one time along with the points of interest in Tokyo. Tips on Using Tokyo Map Points of Interest (right hand side) are sorted by category and alphabetical order of title. There is a scroll bar within the Points of Interest box so you can look through the whole list.

Tokyo Travel Information and Travel Guide - Japan. Yoking past and future, Tokyo dazzles with its traditional culture and passion for everything new. 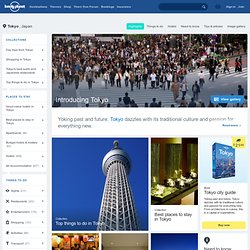 Why I Love Tokyo By Timothy Hornyak I’ve spent over 10 years in Tokyo, but this capital of the shōgun always renews its spell. I love walking in a random direction and finding something unusual like a museum of musical boxes or an eye-popping glimpse of Mt Fuji over Shinjuku at sunset. In a way, Tokyo has an infinite quality.

You’ve Never Had Sushi Like This Tokyo brims with astonishing cuisine. Kampai! The Japanese workaholic stereotype is very true, but stroll through a neon-lined row of Shinjuku yakitori joints on a Friday or any cherry grove in spring, and you’ll see that people take pleasure very seriously here. Blade Runner City This ever-changing metropolis of over 12 million is perhaps the most gorgeous ugly city in the world. Shop Till You Drop Read more. Guide to Hotels, Restaurants and Tourist Sites. Tokyo Tourist Guide. Akihabara 5.00/5 (100.00%) 1 vote In the Meiji Era (1868 to 1912), Akihabara specialized in domestic goods and accessories, in the inter-war years it was bicycles, but now, it’s gadgets galore – from the latest most useful to the latest most useless – Akihabara is the electronics capital of Japan. 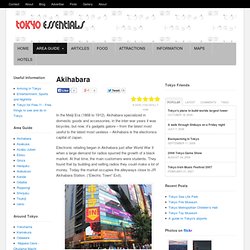 Electronic retailing began in Akihabara just after World War II when a large demand for radios spurred the growth of a black market. At that time, the main customers were students. They found that by building and selling radios they could make a lot of money. Today the market occupies the alleyways close to JR Akihabara Station. Electronics Town – Akihabara The larger shops are located along Chuo Dori Avenue. Competition is fierce between the shops and prices can vary quite substantially. Maid Coffe Shops Maid Kissa are a new phenomenon in Tokyo. Yodobashi – Akihabara Store Been to Akihabara? Secret Japan. Tourism Info / Home. TDR Map to Odd Tokyo. Tokyo and Japan in real-life pictures. TOKYO MAP. About JAPAN RAIL PASS. Japan travel guide. Tokyo - City Guide. Tokyo (東京, Tōkyō) is Japan's capital and the world's most populous metropolis. 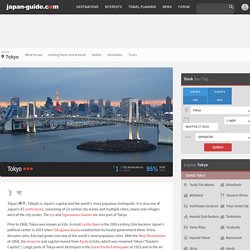 It is also one of Japan's 47 prefectures, consisting of 23 central city wards and multiple cities, towns and villages west of the city center. The Izu and Ogasawara Islands are also part of Tokyo. Prior to 1868, Tokyo was known as Edo. A small castle town in the 16th century, Edo became Japan's political center in 1603 when Tokugawa Ieyasu established his feudal government there. A few decades later, Edo had grown into one of the world's most populous cities. Today, Tokyo offers a seemingly unlimited choice of shopping, entertainment, culture and dining to its visitors. Randy Johnson's Japan Links Page. 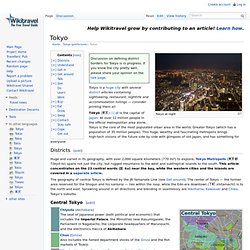 Tōkyō (東京) [1] is the capital of Japan. At over 12 million people in the official metropolitan area alone, Tokyo is the core of the most populated urban area in the world, Greater Tokyo (which has a population of 35 million people). This huge, wealthy and fascinating metropolis brings high-tech visions of the future side by side with glimpses of old Japan, and has something for everyone.

Districts[edit] The geography of central Tokyo is defined by the JR Yamanote Line (see Get around). Metro Tokyo. Timetable and Route Search in Japan. Enjoy the best in JapanTravel. 登别温泉、花卷温泉、箱根温泉、富士五湖温泉、有马温泉、皆生温泉、道后温泉、别府温泉……这里为您精选了350座温泉信息... 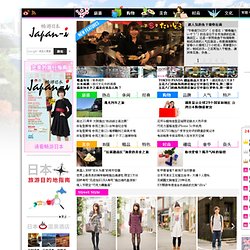