A Visual Introduction to Machine Learning. Finding better boundaries Let's revisit the 73-m elevation boundary proposed previously to see how we can improve upon our intuition. 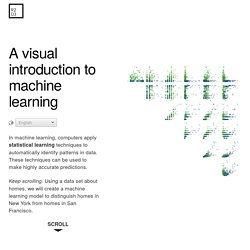 Clearly, this requires a different perspective. Request to econ and math people: solve the Delhi University admission problem. Jun. 26, 2015 Admissions to undergraduate programs in the colleges of Delhi University happen through the so-called ‘cut-off’ system: colleges rank students based on marks in the school-leaving examination and for each program announce a “cut-off” mark. 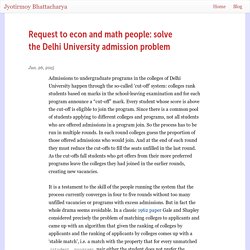 Every student whose score is above the cut-off is eligible to join the program. The Flood-Dresher Experiment. Many experiments have been done on the Prisoner's Dilemma, to try to gauge the normal human behavior in a prisoner's dilemma-type situation. 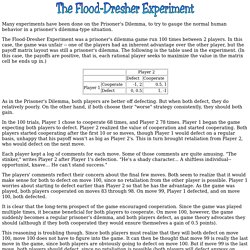 The Flood-Dresher Experiment was a prisoner's dilemma game run 100 times between 2 players. In this case, the game was unfair -- one of the players had an inherent advantage over the other player, but the payoff matrix layout was still a prisoner's dilemma. The following is the table used in the experiment. Programmer Competency Matrix. The Time Everyone “Corrected” the World’s Smartest Woman. By all accounts, Marilyn vos Savant was a child prodigy. 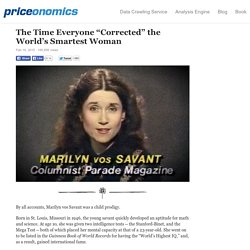 Born in St. Louis, Missouri in 1946, the young savant quickly developed an aptitude for math and science. At age 10, she was given two intelligence tests -- the Stanford-Binet, and the Mega Test -- both of which placed her mental capacity at that of a 23-year-old. She went on to be listed in the Guinness Book of World Records for having the “World’s Highest IQ,” and, as a result, gained international fame. Despite her status as the "world’s smartest woman,” vos Savant maintained that attempts to measure intelligence were “useless,” and she rejected IQ tests as unreliable. Big-O Algorithm Complexity Cheat Sheet. Is the Weissman Score a Real Metric as Shown in Silicon Valley? What Does the Score Represent? Meet Walter Pitts, the Homeless Genius Who Revolutionized Artificial Intelligence. Walter Pitts was used to being bullied. 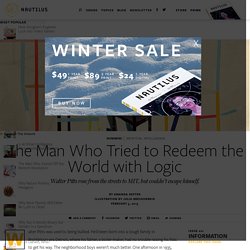 He’d been born into a tough family in Prohibition-era Detroit, where his father, a boiler-maker, had no trouble raising his fists to get his way. The neighborhood boys weren’t much better. One afternoon in 1935, they chased him through the streets until he ducked into the local library to hide. The library was familiar ground, where he had taught himself Greek, Latin, logic, and mathematics—better than home, where his father insisted he drop out of school and go to work. Outside, the world was messy. Here's Waldo: Computing the optimal search strategy for finding Waldo. As I found myself unexpectedly snowed in this weekend, I decided to take on a weekend project for fun. 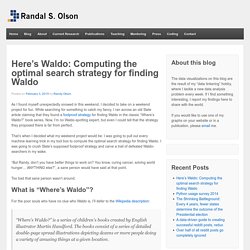 While searching for something to catch my fancy, I ran across an old Slate article claiming that they found a foolproof strategy for finding Waldo in the classic “Where’s Waldo?” Book series. Hill climbing. For example, hill climbing can be applied to the travelling salesman problem. 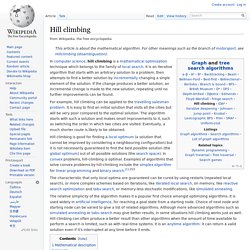 It is easy to find an initial solution that visits all the cities but will be very poor compared to the optimal solution. The algorithm starts with such a solution and makes small improvements to it, such as switching the order in which two cities are visited. The math of organ donation: Kidneys are an NP-hard problem. We're bilaterally symmetric organisms—we've got matching bits on our left and right side. 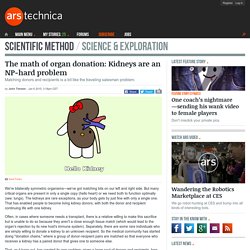 But many critical organs are present in only a single copy (hello heart) or we need both to function optimally (see: lungs). The kidneys are rare exceptions, as your body gets by just fine with only a single one. That has enabled people to become living kidney donors, with both the donor and recipient continuing life with one kidney. The Tears of Donald Knuth. By Thomas Haigh Communications of the ACM, Vol. 58 No. 1, Pages 40-44 10.1145/2688497 Comments (1) In this column I will be looking at the changing relationship between the discipline of computer science and the growing body of scholarly work on the history of computing, beginning with a recent plea made by renowned computer scientist Donald Knuth. 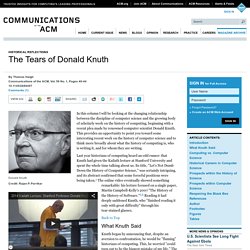 This provides an opportunity to point you toward some interesting recent work on the history of computer science and to think more broadly about what the history of computing is, who is writing it, and for whom they are writing. Last year historians of computing heard an odd rumor: that Knuth had given the Kailath lecture at Stanford University and spent the whole time talking about us. Back to Top What Knuth Said. Visualizing TCP. This video depicts an HTTP GET by showing packets as balls flying between client and server, slowed 40x compared to real time. 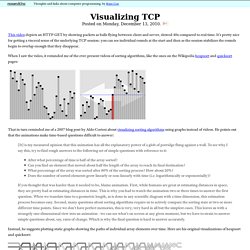 It's pretty nice for getting a visceral sense of the underlying TCP session: you can see individual rounds at the start and then as the session stabilizes the rounds begin to overlap enough that they disappear. When I saw the video, it reminded me of the ever-present videos of sorting algorithms, like the ones on the Wikipedia heapsort and quicksort pages: That in turn reminded me of a 2007 blog post by Aldo Cortesi about visualizing sorting algorithms using graphs instead of videos.

He points out that the animations make time-based questions difficult to answer: Alex Payne — Thoughts On Five Years of Emerging Languages. This Wednesday will mark five years of Emerging Languages, the showcase for new programming languages that I dreamed up back in 2009. As we approach half a decade and well over fifty total presentations, I’ve been reflecting on where the event has been and how the language landscape has changed since we began.

Our first year, 2010, was a big one. Several of the languages presented that year have since broken out into the mainstream, particularly Clojure, Go, and CoffeeScript. The inaugural presentation culminated in a wonderfully tense moment, one that perfectly captures the push and pull of academic and industrial forces in the world of programming languages. As Go co-creator Rob Pike wrapped up his talk and opened up the floor for Q&A, an audience member didn’t hesitate to address the elephant in the server room: Visualizing Algorithms. Why blurring sensitive information is a bad idea. Undoubtedly you have all seen photographs of people on TV and online who have been blurred to hide faces. For example, here's one of Bill Gates: Adapted from the Wikimedia Commons For the most part this is all fine with peoples' faces as there isn't a convenient way to reverse the blur back into a photo so detailed that you can recognise the photo.

Computer Science fundamentals still hold true. There are some discussions out there about what software developer should really know nowadays. Arguments are raised that most of contemporary software developer work is no longer a computer science - which meant creating new stuff out of nothing - but is "just" an engineering work - using already built and verified components and approaches, gluing and mixing it together to create stuff out of other stuff. Questions are raised whether deep understanding of algorithms and data structures or other fundamentals of computer science is crucial in putting together existing libraries and frameworks, which is what most of us basically do every day. The need for a good software developer to hold a Computer Science degree is often questioned and there are multiple advices out there how to be successful in a field without a degree. Indeed, I've never actually implemented sorting or tree search on my own for professional needs, only as an academic exercise.

3-Sweep: Extracting Editable Objects from a Single Photo, SIGGRAPH ASIA 2013. Scientist Finds PageRank-Type Algorithm from the 1940s. The PageRank algorithm is a key part of Google’s method of ranking web pages in search results. It uses the network of links between web pages to determine their value and, famously, judges a page to be important if it is linked to by other important pages.

One crucial feature of this idea is that it requires an iterative approach to constantly re-evaluate the value of a page as the importance of others varies. Iterative ranking algorithms have since become an important part of network theory. The Astronomical Math Behind UPS' New Tool to Deliver Packages Faster.

Photo: UPS In a sense, all business boils down to math. But some companies have tougher equations to solve than others. At UPS, the average driver makes about 120 deliveries per day, says Jack Levis, the shipping giant’s director of process management. To figure out how many different possible routes that driver could travel, just start multiplying: 120 * 119 * 118 * . . . * 3 * 2 * 1. The end result, Levis likes to say, far exceeds the age of the Earth in nanoseconds. If that number sounds big, imagine having to make those calculations for 55,000 drivers every day.