New Zealand makes internet 'trolling' illegal. Under the Harmful Digital Communications Act in effect from this week, anyone convicted of “causing harm by posting digital communication” faces two years in prison and a $50,000 (NZ) (£6,500) fine, while businesses face fines of up to $200,000 (NZ). 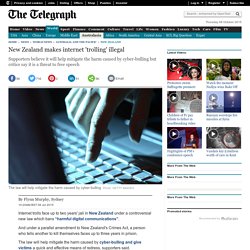 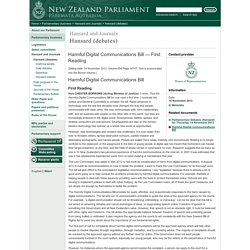 I nominate the Justice and Electoral Committee to consider the bill. Rapid advances in technology over the last few decades have changed the way that people communicate with each other. We now communicate with, form relationships with, and do business with people on the other side of the world. Our lives are increasingly entwined in the digital world. Smartphones, tablets, laptops, and desktop computers are everywhere. However, new technologies also present new challenges. The Law Commission was asked in May 2012 to fast track its consideration of harm from digital communications. The Harmful Digital Communications Bill provides for quick, effective, and proportionate responses to the harm caused by digital communications. 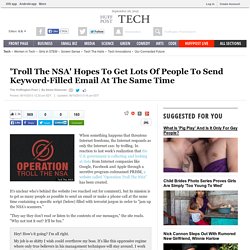 In reaction to last week's realization that the U.S. government is collecting and looking at data from Internet companies like Google, Facebook and Apple through a secretive program codenamed PRISM, a website called "Operation Troll The NSA" has been created. It's unclear who's behind the website (we reached out for comment), but its mission is to get as many people as possible to send an email or make a phone call at the same time containing a specific script (below) filled with terrorist jargon in order to "jam up the NSA's scanners.

" So, who owns the Internet? A clash over who should decide which information flows through Internet networks — and at what price — is now before a Washington, D.C., federal appeals court in a landmark case that could grant Internet service providers (ISPs) the unfettered power to turn the information superhighway into a private toll road. 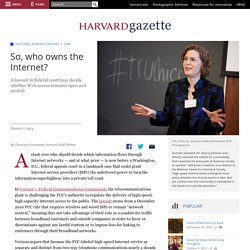 In Verizon v. Federal Communications Commission, the telecommunications giant is challenging the FCC’s authority to regulate the delivery of high-speed, high-capacity Internet access to the public. The lawsuit stems from a December 2010 FCC rule that requires wireless and wired ISPs to remain “network neutral,” meaning they not take advantage of their role as a conduit for traffic between broadband customers and outside companies in order to favor or discriminate against any lawful content or to impose fees for linking to customers through their broadband networks. A decision in the closely watched case is expected early this year. ‘Devastating’ consequences Constitutional claim. Here be trolls: Hunting down online haters. Last updated 09:49 10/03/2013. 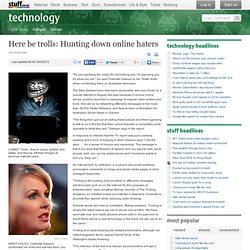 ‘Reign of terror’: An online troll destroys a family’s offline life. Sharon and Richard Moreno were awakened by a phone call from a police negotiator around 2:30 a.m. one night in May 2014. 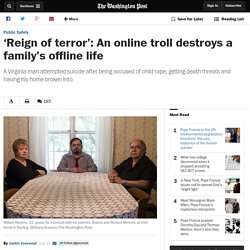 He told them to get out of their home immediately and leave their adult son behind. Officers with rifles greeted the couple on their front lawn in Sterling, Va., and tackled their son William on the porch. They had been drawn by a chilling post attributed to William on a popular local Web forum: “I JUST SHOT MY PARENTS NOW I WILL KILL MY SISTER.” The Morenos say in a lawsuit that the post was a hoax, part of an unrelenting campaign of harassment by “trolls” on the forum, Fairfax Underground, that turned their lives upside down and drove William to attempt suicide.

[Science reveals what makes trolls so nasty] Trolls are the bane of online forums, games and comment sections, sowing discord with inflammatory remarks and needling other users for laughs. William Moreno, 32, poses for a portrait at the home of his parents, Sharon and Richard Moreno, in Sterling, Va. Mr. Mr. TV personality speaks out over flame trolling.

An Australasian TV personality has become one of the latest victims of flame trolling on Twitter. 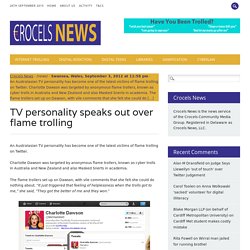 Charlotte Dawson was targeted by anonymous flame trollers, known as cyber trolls in Australia and New Zealand and also Masked Snerts in academia. The flame trollers set up on Dawson, with vile comments that she felt she could do nothing about. “It just triggered that feeling of helplessness when the trolls got to me,” she said, “They got the better of me and they won.” Charlotte Dawson was on the verge of a tragic decision because of abuse from flame trollers Jonathan Bishop, who is an Internet trolling expert and former politician said when one is in the public eye you quickly need to develop coping skills, “I had no end of things said about me when in public life,” he said.