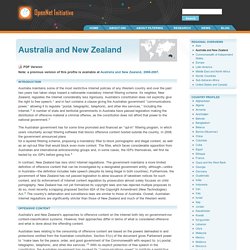 Introduction Australia maintains some of the most restrictive Internet policies of any Western country and over the past two years has taken steps toward a nationwide mandatory Internet filtering scheme. Its neighbor, New Zealand, regulates the Internet considerably less rigorously. Australia’s constitution does not explicitly give the right to free speech, and in fact contains a clause giving the Australian government ‘‘communications power,’’ allowing it to regulate ‘‘postal, telegraphic, telephonic, and other like services,’’ including the Internet. A number of state and territorial governments in Australia have passed legislation making the distribution of offensive material a criminal offense, as the constitution does not afford that power to the national government. In contrast, New Zealand has less strict Internet regulations. 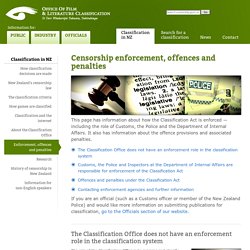 We provide information, resources and advice in order to help people comply with the law, but we do not have an enforcement role. Back to top. Censored: A Short History of Censorship in New Zealand. Censorship Research and Statistics. This research report by Angela Carr, first published in April 2004, profiles censorship offenders and examines characteristics of their offending: Internet Traders of Child Pornography and other Censorship Offenders in New Zealand Protecting Our Innocence: New Zealand's National Plan of Action Against the Commercial Sexual Exploitation of Children (2002) A report published by the Ministry of Justice in February 2002, provides a comprehensive examination of the four main activities that exploit children for their commercial value: child prostitution, child pornography, child sex tourism and child trafficking for sexual purposes. 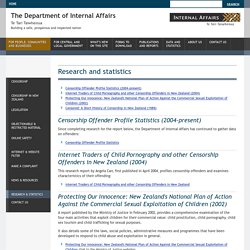 It also details some of the laws, social policies, administrative measures and programmes that have been developed to respond to child abuse and exploitation in general. Protecting Our Innocence: New Zealand's National Plan of Action Against the Commercial Sexual Exploitation of Children (link to the Ministry of Justice website) Censorship. Censorship-and-the-Internet_Dec2010. Censorship in New Zealand. Censorship Objectionable and Restricted Material. What is 'objectionable' and 'restricted' material? 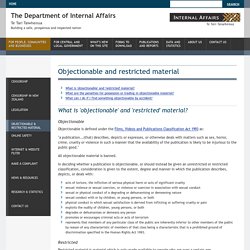 Objectionable Objectionable is defined under the Films, Videos and Publications Classification Act 1993 as: "a publication... (that) describes, depicts or expresses, or otherwise deals with matters such as sex, horror, crime, cruelty or violence in such a manner that the availability of the publication is likely to be injurious to the public good. " All objectionable material is banned. In deciding whether a publication is objectionable, or should instead be given an unrestricted or restricted classification, consideration is given to the extent, degree and manner in which the publication describes, depicts, or deals with: Restricted Restricted material is material which is only made available to people who are over a certain age.

Typically, this is R18 or Adult material similar to that which can be legally purchased from video or magazine outlets. Examples of offences that could occur - This would include (but is not restricted to): Objectionable Publications and Indecency Legislation Bill 124-1 (2013), Government Bill. Clause 1 is the Title clause. 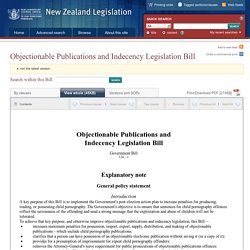 The Bill is intended to be divided at the end of its committee of the whole House stage, and enacted as the following 3 Acts: Clause 2 relates to commencement. The amendments the Bill makes are to come into force on the 28th day after the date on which it receives the Royal assent. Part 1Amendments related to objectionable publications. Objectionable Publications and Indecency Legislation Bill 2013: Bills Digest No 2091. 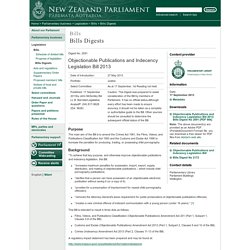