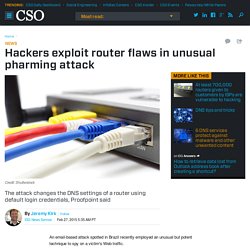 The technique exploited security flaws in home routers to gain access to the administrator console. Once there, the hackers changed the routers' DNS (Domain Name System) settings, a type of attack known as pharming. Pharming is tricky to pull off because it requires access to an ISP's or an organization's DNS servers, which translate domain names into the IP addresses of websites.

Those DNS systems are typically well-protected, but home routers often are not. Security firm Proofpoint wrote in a blog post Thursday that launching the attack via email was a novel approach since pharming is normally a network-based attack. Scopus - Cookies Disabled. IJCNIS-V7-N4-3.pdf. PHARMING ATTACKS: DETECTION & COUNTERMEASURES. Through this technique, a domain that has just expired is purchased by someone else with malicious intention e.g. building a new website to imitate the previous version and deceive users that connect to the site. 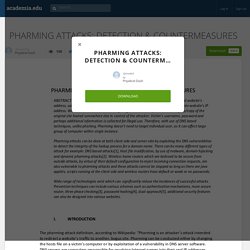 Similar domain name The attacker can register multiple spelling permutations of the targeted domain name in order to dupe users. For instance, an attacker can register a domain name that is the strikingly similar to the legitimate domain name, e.g. www.chase.com can be used to fake the bank’s website as www.chasee .com. Search engine attack The attacker purchases sponsored links or similar services, taking advantage of the flexibility of some search engine providers, in order to place their hyperlinked resources (fake websites) at the top of a user search page response to lure them into the fake website. 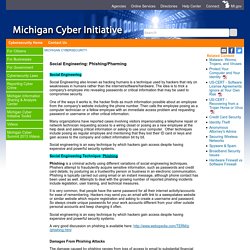 The idea is to trick a company's employee into revealing passwords or critical information that may be used to compromise security. One of the ways it works is, the hacker finds as much information possible about an employee from the company's website including the phone number. Then calls the employee posing as a computer technician or a fellow employee with an immediate access problem and requesting password or username or other critical information. Cyber criminals target law firms - NZ Law Society. “Law firms are attractive targets for cyber criminals,” says Ken McCallum, head of cyber security at the United Kingdom Department for Business, Innovation and Skills in an article for the Law Society Gazette, journal of the Law Society of England and Wales. 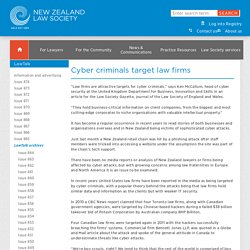 “They hold business-critical information on client companies, from the biggest and most cutting-edge corporates to niche organisations with valuable intellectual property.” It has become a regular occurrence in recent years to read stories of both businesses and organisations overseas and in New Zealand being victims of sophisticated cyber attacks.

Just last month a New Zealand retail chain was hit by a phishing attack after staff members were tricked into accessing a website under the assumption the site was part of the chain’s tech support. Four Canadian law firms were targeted again in 2011 with the hackers successfully breaching the firms’ systems. Chi-security-toolbar.pdf. Why_phishing_works.pdf. Teach a Man to Phish . . . And Make Him a Millionaire. In his recent Predictions & Unpredictions for 2013 blog post, our CEO Matt Blumberg talked about how brands’ marketing and security functions will need to join forces to fight phishing. 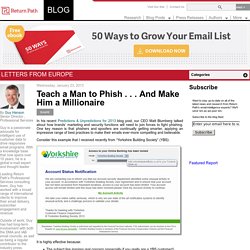 One key reason is that phishers and spoofers are continually getting smarter, applying an impressive range of best practices to make their emails ever-more compelling and believable. Consider this example that I received recently from “Yorkshire Building Society” (YBS): It is highly effective because: The subject line inspires real concern (especially if you really are a YBS customer!) The “Friendly From” is believable (see inset) The sender domain is correct (because the real sender is spoofing it!).

I submitted the email to Return Path’s Inbox Preview rendering and content validation tool. It generated a perfectly respectable Spam Assassin score of only 1.5 It only identified one potential spam trigger word – “Disclaimer” It even rendered well on most major mobile devices! Key observations include: How Phishing Works - HowStuffWorks. Suppose you check your e-mail one day and find a message from your bank. 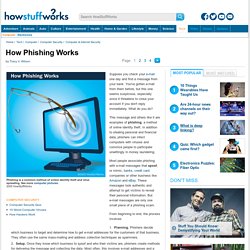 You've gotten e-mail from them before, but this one seems suspicious, especially since it threatens to close your account if you don't reply immediately. What do you do? This message and others like it are examples of phishing, a method of online identity theft. In addition to stealing personal and financial data, phishers can infect computers with viruses and convince people to participate unwittingly in money laundering. Most people associate phishing with e-mail messages that spoof, or mimic, banks, credit card companies or other business like Amazon and eBay. ­ From beginning to end, the process involves: Planning. ­ If the phisher wants to coordinate another attack, he evaluates the successes and failures of the completed scam and begins the cycle again. Phishing scams take advantages of software and security weaknesses on both the client and server sides.