Tech Support Scams. In a recent twist, scam artists are using the phone to try to break into your computer. 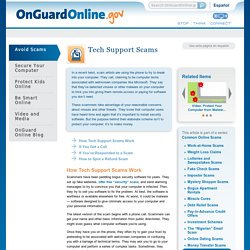 They call, claiming to be computer techs associated with well-known companies like Microsoft. They say that they’ve detected viruses or other malware on your computer to trick you into giving them remote access or paying for software you don’t need. These scammers take advantage of your reasonable concerns about viruses and other threats. They know that computer users have heard time and again that it’s important to install security software. 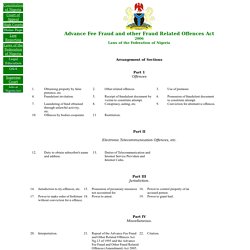 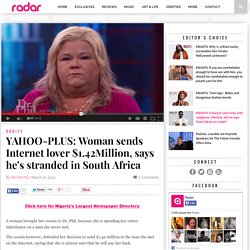 Phil, because she is spending her entire inheritance on a man she never met. The cousin however, defended her decision to send $1.42 million to the man she met on the Internet, saying that she is almost sure that he will pay her back. Sarah, 46, said that she got to know the man who calls himself Chris Olsen, 18 months ago. Olsen told Sarah that several things came up, which keeps him from returning to the United States. He was born and raised in Milan, Italy, and moved to the United States about 18 years ago. Crystal was worried that her cousin was wasting her vast inheritance money, sending it to the man she had never met, so she asked Dr. Sarah has sent so much money to South Africa, that Western Union has banned her from sending any more cash. Consumer Affairs. Wairarapa online scam busted - Wairarapa Times Age - Wairarapa Times-Age News. Masterton man arrested after IP traced: Police Wairarapa police say they have busted a Masterton-based cellphone scam which stung would-be bargain hunters across New Zealand. 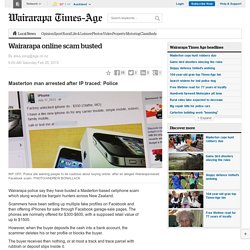 Scammers have been setting up multiple fake profiles on Facebook and then offering iPhones for sale through Facebook garage-sale pages. The phones are normally offered for $300-$600, with a supposed retail value of up to $1500. However, when the buyer deposits the cash into a bank account, the scammer deletes his or her profile or blocks the buyer. The buyer receives then nothing, or at most a track and trace parcel with rubbish or deposit slips inside it. Police believe between 15 to 20 phones have been "sold" on Facebook with a total of about $8000 taken. Police began investigating the scam late last year and, through collating cellphone numbers, usernames, CCTV footage and IP addresses, tracked and arrested a Masterton man, 30, believed to be the ringleader. Phishing, social engineering and online scams. Whatever you call it, phishing, social engineering or ‘hacking the mind’ always relies on human weaknesses to succeed. 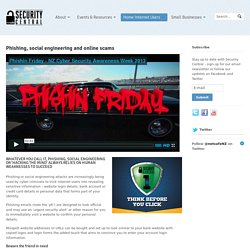 Internet scam artists are more effective than you think - Jul. 26, 2011. It may look legitimate, but this is a fake antivirus program designed to scam you. 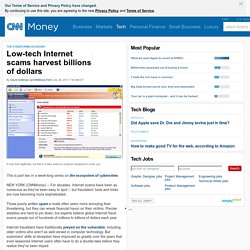 This is part two in a week-long series on the ecosystem of cybercrime. NEW YORK (CNNMoney) -- For decades, Internet scams have been as numerous as they've been easy to spot -- but fraudsters' tools and tricks are now becoming more sophisticated. Those poorly written spam e-mails often seem more annoying than threatening, but they can wreak financial havoc on their victims. Precise statistics are hard to pin down, but experts believe global Internet fraud scams people out of hundreds of millions to billions of dollars each year. 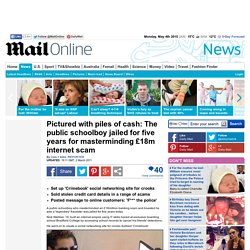 Nick Webber, 19, built an internet empire using IT skills honed at exclusive boarding school Bradfield College by accessing school records to cancel his friends' detentions. He went on to create a social networking site for crooks dubbed 'Crimebook'. Fraudster: Nicholas Webber is pictured posing beside a laptop, with a large quantity of cash. Meanwhile, his international 'forum' GhostMarket.net was a marketplace for stolen bank account details, and offered tutorials in a range of sophisticated hacking techniques. Wex Legal Dictionary / Encyclopedia. Criminal activity involving the perpetration of a fraud through the use of the computer or the internet can take many different forms. 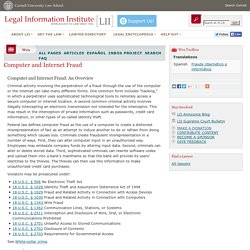 One common form includes “hacking,” in which a perpetrator uses sophisticated technological tools to remotely access a secure computer or internet location. A second common criminal activity involves illegally intercepting an electronic transmission not intended for the interceptor. This may result in the interception of private information such as passwords, credit card information, or other types of so-called identity theft.