Liability of Internet Host Providers in Defamation Actions: From Gatekeepers to Identifiers by Anne S. Y. Cheung. The University of Hong Kong - Faculty of LawApril 23, 2014 University of Hong Kong Faculty of Law Research Paper No. 2014/013 Abstract: Internet intermediary liabilities in defamation actions have posed vexing legal problems in the new Internet social era of Web 2.0, especially when users can generate and spread their own content anonymously without being easily identified. 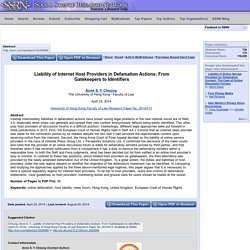 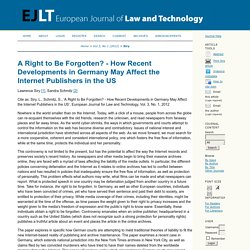 - How Recent Developments in Germany May Affect the Internet Publishers in the US’, European Journal for Law and Technology, Vol. 3, No. 1, 2012 Nowhere is the world smaller than on the Internet. Today, with a click of a mouse, people from across the globe can re-acquaint themselves with the old friends, research the unknown, and read newspapers from faraway places and far away times. As the world cyber-shrinks, the ways in which governments and courts attempt to control the information on the web has become diverse and contradictory. This controversy is not limited to the present, but has the potential to affect the way the Internet records and preserves society’s recent history.

The paper explores in specific how German courts are attempting to meld traditional theories of liability to fit the new Internet-based reality of publishing and archive maintenance. I. 1. 2. 3. II. 1. 2. 3. III. V. Publication and the internet – A v Google. Ursula Cheer, Professor of Law, University of Canterbury, Christchurch comments on defamation, liability, publication, the internet and the recent HC case: A v Google. 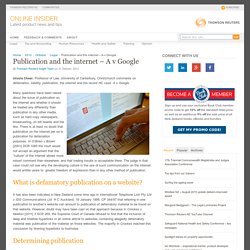 Many questions have been raised about the issue of publication on the internet and whether it should be treated any differently than publication in any other media, such as hard copy newspapers, broadcasting, on bill boards and the like. A New Zealand warning to online publishers – Karam v Parker [2014] NZHC 737. Ursula Cheer, Professor of Law, University of Canterbury, Christchurch, comments on the results of Karam v Parker [2014] NZHC 737. 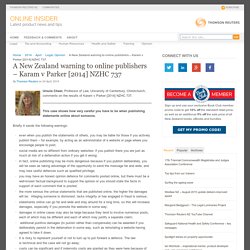 This case shows how very careful you have to be when publishing statements online about someone. Panel B: Reforming Defamation Law and Practice. Panel B focused on the development and reform of defamation law across different jurisdictions, moderated by Doreen Weisenhaus. 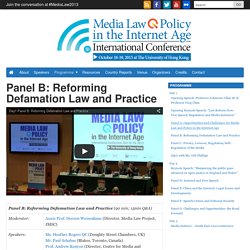 Heather Rogers QC began the conversation by outlining the long road to parliamentary reform of defamation law in the UK: From Lord Lester’s private member bill, to the Joint Parliamentary Committee Report, to the eventual passing of the Defamation Act in April 2013. She discussed key elements in the revamped legislation, including the serious harm requirement which is consistent with the recent holding in Pavel Karpov vs. William Felix Browder (2013), where foreign claimants whose libel claim had no real connection to the English jurisdiction was struck down by the High Court. She also highlighted the defence of “publication on matter of public interest” under the new Act, which replaces the common law “Reynolds defence,” which provided for a qualified privilege for publication of defamatory statements in the public interest. 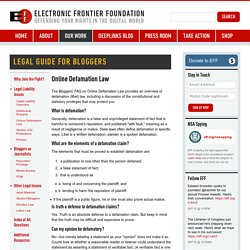 What is defamation? Generally, defamation is a false and unprivileged statement of fact that is harmful to someone's reputation, and published "with fault," meaning as a result of negligence or malice. Kahui-twins-tragedy-Facebook-and-online-defamation. Web hosts’ defamation liability restricted. « Some questions for the PM | Main | Broadcasting Standards issue » By Steven | September 19, 2014 In a significant Court of Appeal decision (see Murray v Wishart), hot off the press, the judges have unanimously ruled that a third party publisher (the owner of a Facebook page that contained comments by others) was not liable for other people’s comments simply because he “ought to have known” that they contain defamatory material (even if he didn’t actually know of the content of the comments). 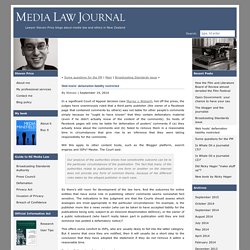 So hosts of Facebook pages will only be liable for defamation of posters’ comments if (a) they actually knew about the comments and (b) failed to remove them in a reasonable time in circumstances that give rise to an inference that they were taking responsibility for the comments. Will this apply to other content hosts, such as the Blogger platform, search engines and ISPs? Maybe. Defamation. Someone has written unflattering and untrue things about me online. 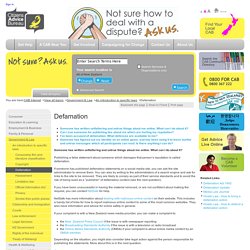 What can I do about it? Publishing a false statement about someone which damages that person’s reputation is called defamation. If someone has published defamatory statements on a social media site, you can ask the site administrator to remove them. You can also try writing to the administrators of a search engine and ask for links to the site to be removed.