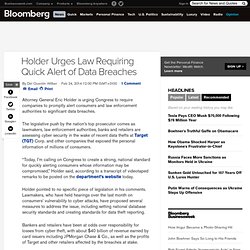 The legislative push by the nation’s top prosecutor comes as lawmakers, law enforcement authorities, banks and retailers are assessing cyber security in the wake of recent data thefts at Target (TGT) Corp. and other companies that exposed the personal information of millions of consumers. “Today, I’m calling on Congress to create a strong, national standard for quickly alerting consumers whose information may be compromised,” Holder said, according to a transcript of videotaped remarks to be posted on the department’s website today. Holder pointed to no specific piece of legislation in his comments. In testimony before the Senate Judiciary Committee on Feb. 4, a top Justice official urged Congress to adopt a 2011 White House proposal that would require business to alert the federal government to data breaches.

Father collected offensive material. Last updated 09:00 01/03/2014 The father of a toddler has admitted having hundreds of explicit videos and images of children - some of them featuring sadism and bestiality - stored on his computer. 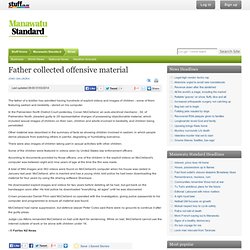 In the Palmerston North District Court yesterday, Conan McClelland, an auto-electrical mechanic , 34, of Palmerston North, pleaded guilty to 29 representative charges of possessing objectionable material, which included sexual images of children on their own, children and adults involved in bestiality, and children being penetrated. Other material was described in the summary of facts as showing children involved in sadism, in which people derive pleasure from watching others in painful, degrading or humiliating scenarios. There were also images of children taking part in sexual activities with other children. Some of the children were featured in videos seen by United States law enforcement officers.

Father collected offensive material. New Apple vulnerability allows Malicious keylogger App to Record User Inputs. Yet another Apple vulnerability has been exposed by security researchers, that can be exploited to track your finger's every action on iOS Devices i.e. iPhone, iPad etc. 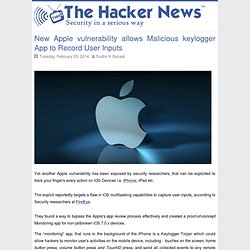 The exploit reportedly targets a flaw in iOS multitasking capabilities to capture user inputs, according to Security researchers at FireEye. They found a way to bypass the Apple's app review process effectively and created a proof-of-concept Monitoring app for non-jailbroken iOS 7.0.x devices. The “monitoring” app, that runs in the background of the iPhone is a Keylogger Trojan which could allow hackers to monitor user's activities on the mobile device, including - touches on the screen, home button press, volume button press and TouchID press, and send all collected events to any remote server.

GCSB bill passes after final reading. The Government Communications Security Bureau and Related Legislation Amendment Bill has passed at its third reading. Prime Minister and Minister Responsible for GCSB John Key welcomed the passing of the legislation. "Despite ill-informed claims to the contrary, nothing in this legislation allows for wholesale spying on New Zealanders. It actually tightens, not widens, the existing regime,'' Mr Key said. China boosts cybersecurity efforts, strives to become 'Internet power' China is bolstering its efforts on cybersecurity with a new high-level committee that aims to turn the nation into an “Internet power,” the country’s official state media said last week. 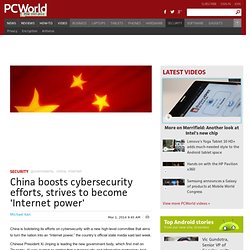 Chinese President Xi Jinping is leading the new government body, which first met on Thursday. Xi was quoted as stating that cybersecurity and information technology had become a matter of national security. “Without cybersecurity there is no national security, without information technology there is no modernization,” Xi added. Increasingly, China has found itself embroiled in cybersecurity issues. Over the years, the nation has fended off accusations that it carries out state-sponsored hacking attacks. The issue was complicated some months later by revelations from Edward Snowden, a former U.S. Chinese officials have said the nation is a major victim of cyberattacks. The New Zealand Herald e-Edition Mobile.

Sat, 22 Feb 2014 Why your smartphone might be the most dangerous thing you own Ihave a game I want you to play. 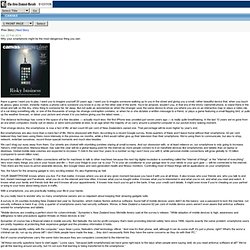 I want you to imagine yourself 20 years ago. I want you to imagine someone walking up to you in the street and giving you a small, rather beautiful device that, when you touch its glossy glass screen, instantly makes a phone call to someone you know in a city on the other side of the world. Obama administration seeks tougher cyber-security law. WASHINGTON — The Obama administration recommends a uniform federal standard requiring businesses to quickly report thefts of electronic personal information, acting Assistant Attorney General Mythili Raman told a Senate Judiciary Committee hearing Tuesday. 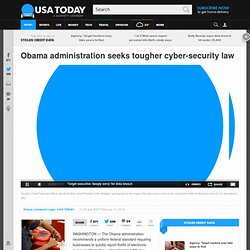 The hearing explored ways to combat cyber-crime after massive data breaches at major retailers, including Target, which announced it is spending $100 million to expedite transition to "smart" cards with computer chips from the standard magnetic strip credit and debit cards. "Businesses should be required to provide prompt notice to consumers in the wake of a breach," Raman said. "American consumers should know when they are at risk of identify theft or other harms because of a data security breach. " Executives from Target and Neiman Marcus also testified, detailing their responses to recent breaches.