Ipcommission. Self Defense in Cyberspace: Law and Policy. Hacking Back, Signaling, and State-Society Relations – by Adam Segal. Over the last year, in the wake of continuous revelations of cyber attacks on companies, the media, think tanks, and civil society groups, there has been an increasingly, vocal debate over whether private actors should be allowed to engage in “active defense”, or more offensive oriented forms of defense sometimes referred to as “hacking back.” 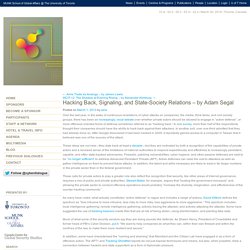 In one survey, more than half of the respondents thought their companies should have the ability to hack back against their attackers. In another poll, over one-third admitted that they had already done so. After Google discovered it had been hacked in 2009, it reportedly gained access to a computer in Taiwan that it believed was one of the sources of the attack. These calls for private actors to play a greater role also reflect the recognition that security, like other areas of Internet governance, requires a mix of public and private authorities. Should We Hack Back? The DOJ on Preventing and Combating Cybercrime. “No,” says U.S. 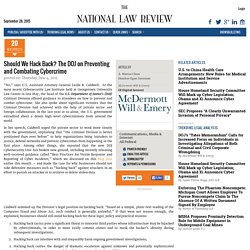 Assistant Attorney General Leslie R. Caldwell. At the most recent Cybersecurity Law Institute held at Georgetown University Law Center in late May, the head of the U.S. Department of Justice’s (DOJ) Criminal Division offered guidance to attendees on how to prevent and combat cybercrime. She also spoke about significant victories that the Criminal Division had achieved with the help of private sector and foreign collaboration. In her speech, Caldwell urged the private sector to work more closely with the government, explaining that “the Criminal Division is better positioned than ever before” to help organizations bring intruders to justice, defend networks and prevent cybercrimes from happening in the first place. Active defense of corporate information systems. IO Journal | May 2010 creation of corporate personhood and the discussion of the intent of the fourteenth amendment. 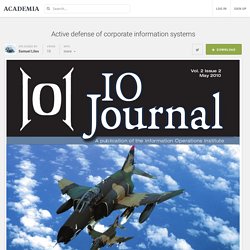 These discussions are moot, as legal precedent is the standard by which courts make decisions. Therefore the author is not concerned with the vari-ous arguments about the makeup of corporate personhood, and they will only be discussed where necessary. The discus will only consider self-defense from attacks originating from non-physical vectors. Corporate physical security, while similar in nature has a separate and better defined legal precedent. 'Stand Your Cyberground' Law: A Novel Proposal for Digital Security.

Though problematic, authorizing industry victims to counterattack may prove a good stop-gap measure to remove the political risk of government intervention while still creating deterrence. 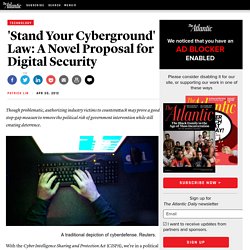 A traditional depiction of cyberdefense. Reuters. With the Cyber Intelligence Sharing and Protection Act (CISPA), we're in a political tug-of-war over who should lead the security of our digital borders: should it be a civilian organization such as the Department of Homeland Security (DHS), or a military organization such as the Department of Defense (DoD)? I want to suggest a third option that government need not be involved--a solution that would avoid very difficult issues related to international humanitarian law (IHL) and therefore reduce the risk of an accidental cyberwar or worse.

Why We Need More Options First, as a nation of law, we may not be ready yet for government to lead cyberdefense against foreign adversaries. Why It Could Work Possible Objections Conclusion. Cyber Letters of Marque and Reprisal: "Hacking Back" In the thirteenth century, before the rise of the “modern” state, private enforcement mechanisms reigned supreme. 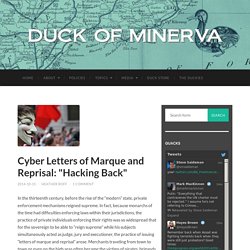 In fact, because monarchs of the time had difficulties enforcing laws within their jurisdictions, the practice of private individuals enforcing their rights was so widespread that for the sovereign to be able to “reign supreme” while his subjects simultaneously acted as judge, jury and executioner, the practice of issuing “letters of marque and reprisal” arose. Newamerica. Picture this: You're the Chief Technology Officer of a Fortune 500 Company whose stock price is on the rise. 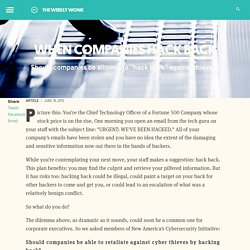 One morning you open an email from the tech guru on your staff with the subject line: "URGENT: WE'VE BEEN HACKED. " All of your company's emails have been stolen and you have no idea the extent of the damaging and sensitive information now out there in the hands of hackers. While you're contemplating your next move, your staff makes a suggestion: hack back. This plan benefits: you may find the culprit and retrieve your pilfered information. But it has risks too: hacking back could be illegal, could paint a target on your back for other hackers to come and get you, or could lead to an escalation of what was a relatively benign conflict. So what do you do? The dilemma above, as dramatic as it sounds, could soon be a common one for corporate executives.

Should companies be able to retaliate against cyber thieves by hacking back? Despite these uncertainties, I'm inclined to say yes. Hacking Back against Cyber Attacks. Back hacking is the process of reverse engineering of hacking efforts, which attempts to stop cyber crimes by identifying attacks on a system and their origin. 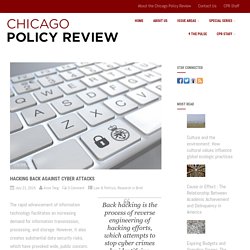