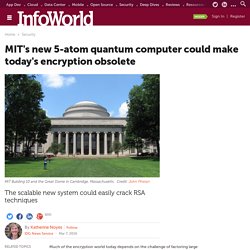 In traditional computing, numbers are represented by either 0s or 1s, but quantum computing relies on atomic-scale units, or “qubits,” that can be simultaneously 0 and 1 -- a state known as a superposition that's far more efficient. It typically takes about 12 qubits to factor the number 15, but researchers at MIT and the University of Innsbruck in Austria have found a way to pare that down to five qubits, each represented by a single atom, they said. The development is in many ways an answer to a challenge posed back in 1994, when MIT professor Peter Shor came up with a quantum algorithm that calculates the prime factors of a large number with much better efficiency than a classical computer. FBI director admits Apple encryption case could set legal precedent. Apple VP says FBI encryption order 'puts everyone at risk' As the legal battle between Apple and the FBI continues, Apple's vice president of software today presented the company's case to the public. 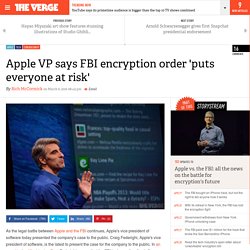 Craig Federighi, Apple's vice president of software, is the latest to present the case for the company to the public. In an op-ed in the Washington Post, Federighi argues that the FBI is demanding Apple "turn back the clock to a less-secure time," a move that he says "puts everyone at risk. " Apple Strengthening iCloud’s Encryption Amid Legal Battle With FBI Over San Bernardino Shooter’s iPhone. Apple Inc. is working to fortify its iCloud encryption, making it more difficult to unlock iPhones, the Financial Times reported Thursday, citing sources. 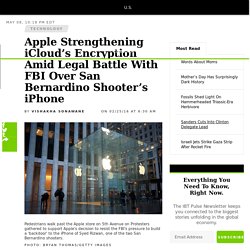 The move comes after U.S. officials sought Apple’s help to access the San Bernardino shooter’s iPhone — a request turned down by company CEO Tim Cook. Although tightened iCloud encryption would protect customers’ phones from hackers, it would also annoy investigators who are facing problems obtaining data from Apple’s servers despite a court order, according to the Financial Times. Charles Barry Smith Current U S Encryption Regulations. What is Data Encryption Standard (DES)? - Definition from WhatIs.com. The Data Encryption Standard (DES) is an outdated symmetric-key method of data encryption. 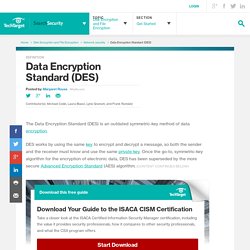 DES works by using the same key to encrypt and decrypt a message, so both the sender and the receiver must know and use the same private key. Once the go-to, symmetric-key algorithm for the encryption of electronic data, DES has been superseded by the more secure Advanced Encryption Standard (AES) algorithm. (Content continues below) By submitting your email address, you agree to receive emails regarding relevant topic offers from TechTarget and its partners.

You can withdraw your consent at any time. You also agree that your personal information may be transferred and processed in the United States, and that you have read and agree to the Terms of Use and the Privacy Policy. Practical Applications. This chapter is from the book  Now that we have looked at most of the basic cryptographic services and have an idea of how they work, let us ask this question: What good are they? 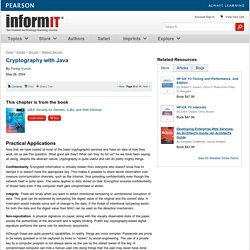 What can they do for us? As we have been saying all along, despite the abstract nature, cryptography is quite useful and can do pretty mighty things. Confidentiality. Encrypted information is virtually hidden from everyone who doesn't know how to decrypt it or doesn't have the appropriate key. Integrity. Non-repudiation. Although these are quite powerful capabilities, in reality, things are more complex. But before we proceed to dismiss cryptography as useless junk, let us think about the physical world.

The cyber world is no different. However, cryptography by itself is quite inadequate for real life use. Encryption. Return to Privacy Module IV Cryptography [E]ncryption technologies are the most important technological breakthrough in the last one thousand years. 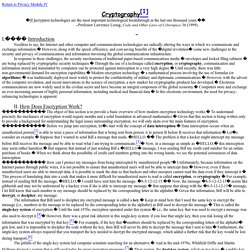 --Professor Lawrence Lessig, Code and Other Laws of Cyberspace 36 (1999). Encryption Law - Guide to Cryptography Law - HG.org. Encryption Law or Cryptography Law deals with legislation ensuring that information is secure and transmitted confidentially, as well as policies designed to keep secure encryption schemes out of the hands of unauthorized individuals and foreign powers. 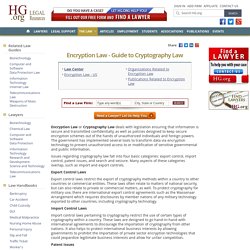 Patent Issues Search and Seizure Copyright HG.org. Personal Data Encryption and its Legal Implications – Columbia Science and Technology Law Review. Under the regime of Apple’s iOS 7 operating system, a law enforcement agency seeking access to a passcode-protected iPhone would send the phone, along with a valid search warrant, to Apple, who would then be obligated to bypass the passcode using a built-in “backdoor.” 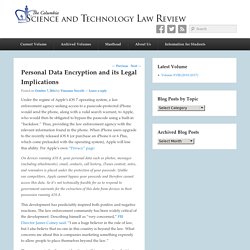