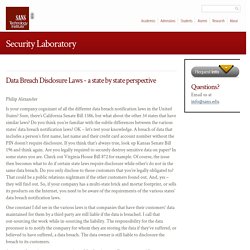 Sure, there’s California Senate Bill 1386, but what about the other 34 states that have similar laws? Do you think you’re familiar with the subtle differences between the various states’ data breach notification laws? OK – let’s test your knowledge. One constant I did see in the various laws is that companies that have their customers' data maintained for them by a third party are still liable if the data is breached. Amongst the various states, encryption of the data is generally seen as providing an exemption to the disclosure requirements. David Cameron pledges anti-terror law for internet after Paris attacks. Britain’s intelligence agencies should have the legal power to break into the encrypted communications of suspected terrorists to help prevent any Paris-style attacks, David Cameron proposed on Monday. 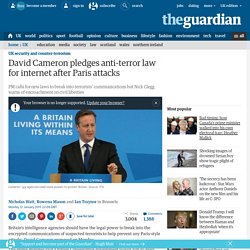 The prime minister said a future Conservative government would aim to deny terrorists “safe space” to communicate online, days after a warning from the director general of MI5, Andrew Parker, that the intelligence agencies are in danger of losing the ability to monitor “dark places” on the net. His proposed legislation, which would be introduced within the first year of Cameron’s second term in Downing Street if the Conservatives win the election, would provide a new legal framework for Britain’s GCHQ and other intelligence agencies to crack the communications of terror suspects if there was specific intelligence of an imminent attack. Political approval would also be necessary. Encryption Law - Guide to Cryptography Law - HG.org. Encryption Law or Cryptography Law deals with legislation ensuring that information is secure and transmitted confidentially, as well as policies designed to keep secure encryption schemes out of the hands of unauthorized individuals and foreign powers. 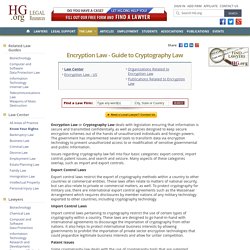 The government has implemented several tools to transform data via encryption technology to prevent unauthorized access to or modification of sensitive governmental and public information. Issues regarding cryptography law fall into four basic categories: export control, import control, patent issues, and search and seizure. Many aspects of these categories overlap, such as import and export controls. Export Control Laws. Encryption - Look before you leap - NZ Law Society. Lawyers should seek high quality, unbiased advice relating to their IT function before encrypting their client’s data, managing director of Mercury IT Peter Macleod says. 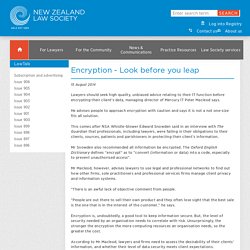 He advises people to approach encryption with caution and says it is not a not one-size fits all solution. This comes after NSA Whistle-blower Edward Snowden said in an interview with The Guardian that professionals, including lawyers, were failing in their obligations to their clients, sources, patients and parishioners in protecting their client’s information. Mr Snowden also recommended all information be encrypted. Cybersecurity Summit Exposes Silicon Valley’s Privacy Fears. As encryption spreads, U.S. grapples with clash between privacy, security.

For months, federal law enforcement agencies and industry have been deadlocked on a highly contentious issue: Should tech companies be obliged to guarantee government access to encrypted data on smartphones and other digital devices, and is that even possible without compromising the security of law-abiding customers? 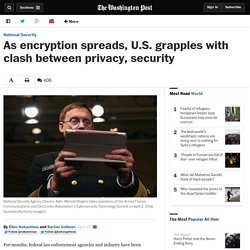 Recently, the head of the National Security Agency provided a rare hint of what some U.S. officials think might be a technical solution. Why not, suggested Adm. Michael S. Rogers, require technology companies to create a digital key that could open any smartphone or other locked device to obtain text messages or photos, but divide the key into pieces so that no one person or agency alone could decide to use it? “I don’t want a back door,” Rogers, the director of the nation’s top electronic spy agency, said during a speech at Princeton University, using a tech industry term for covert measures to bypass device security. 5 Ways CEOs Can Limit Liability, Manage Risk with Encryption. 5 Ways CEOs Can Limit Liability, Manage Risk with Encryption. 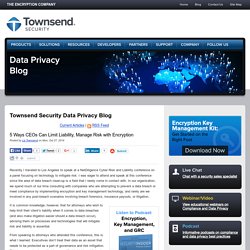 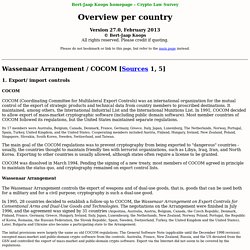 Please credit if quoting. Security aspects of e-business. The perceived lack of security in transacting and communicating online continues to be seen as an obstacle to the uptake of e-business. 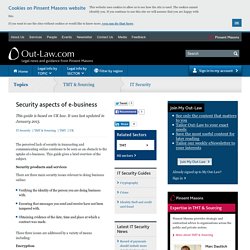 This guide gives a brief overview of the subject. Security products and services There are three main security issues relevant to doing business online: Verifying the identity of the person you are doing business with.Ensuring that messages you send and receive have not been tampered with.Obtaining evidence of the date, time and place at which a contract was made. How Encryption Works - HowStuffWorks. When we use the Internet, we're not always just clicking around and passively taking in information, such as reading news articles or blog posts -- a great deal of our time online involves sending others our own information. 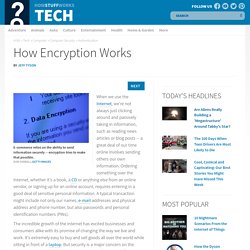 Ordering something over the Internet, whether it's a book, a CD or anything else from an online vendor, or signing up for an online account, requires entering in a good deal of sensitive personal information. A typical transaction might include not only our names, e-mail addresses and physical address and phone number, but also passwords and personal identification numbers (PINs). The incredible growth of the Internet has excited businesses and consumers alike with its promise of changing the way we live and work.