Cybersecurity Summit Exposes Silicon Valley’s Privacy Fears. FBI case against Dotcom revealed. FBI evidence against Kim Dotcom says his companies made more than $200 million over five years from his Megaupload website, and that he was aware of the site's copyright infringement. 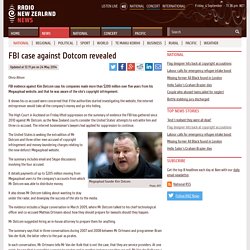 It shows his co-accused were concerned that if the authorities started investigating the website, the internet entreprenuer would take all the company's money and go into hiding. Treaties and International Law - International Courts and Tribunals - Extradition - NZ Ministry of Foreign Affairs and Trade> Extradition Extradition is an official process allowing for the surrender of a suspected or convicted criminal from one state to another. 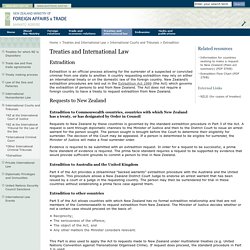 A country requesting extradition may rely on either an international treaty or on the domestic law of the foreign country. New Zealand Law Commission: IP37 Extradition and Mutual Assistance in Criminal Matters. Cyber crime tops FBI Finlayson agenda. The Federal Bureau of Investigation (FBI) sent its deputy general to New Zealand today for a meeting at the Beehive - with the delays to Kim Dotcom's extradition most likely top of the agenda. 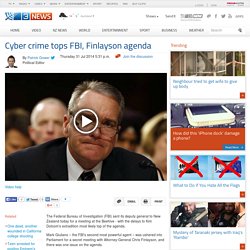 Mark Giuliano – the FBI's second most powerful agent – was ushered into Parliament for a secret meeting with Attorney-General Chris Finlayson, and there was one issue on the agenda. "I discussed with him issues of cyber crime," says Mr Finlayson. And of course there's one big FBI cyber crime case here – Kim Dotcom. "I'm not going to talk about the Kim Dotcom case to anyone," says Mr Finlayson. "I'm not talking about Kim Dotcom because it's before the courts. " Mr Giuliano is a former SWAT assault team leader, so he knows all about raids. The Dotcom raid was on January 20, 2012 – 923 days ago – and last month the extradition hearing was delayed again.

CLO - Assistance for Foreign Authorities - Extradition. “Cyber-crime Jurisdiction in New Zealand. As identity theft) were occurring, or a lack of appreciation that computer-basedcrimes were distinct from crimes committed through traditional means (if indeed they are), or quantitatively or qualitatively significant.Article 2 of the 2001 Council of Europe’s Convention on Cybercrime required signatory governments to enact such provisions as may be necessary toestablish as criminal offences under their domestic laws, when committedintentionally, the access to the whole or any part of a computer system withoutright. 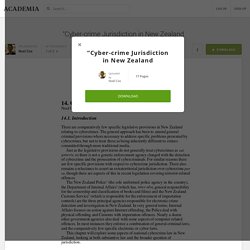 Although New Zealand was not a signatory to this Council of Europeinitiative, the Budapest convention is the first international agreement on thecontrol of cybercrime; it has so far been signed by 42 countries, and itsinfluence could not be ignored. 14.2.2. Provisions on Various Cybercrimes Hacking and Related Offences Unauthorised access to computer systems, or ‘hacking’, is restricted by theTelecommunications Act 1987 and more recently by amendments to the CrimesAct 1961.

V. Cyber-scam teen facing extradition. The teenager at the centre of an international cyber scam could face extradition to the United States, where cyber crimes carry strong penalties including long jail sentences. 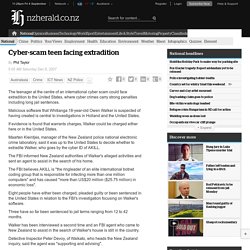 Malicious software that Whitianga 18-year-old Owen Walker is suspected of having created is central to investigations in Holland and the United States. If evidence is found that warrants charges, Walker could be charged either here or in the United States. Maarten Kleintjes, manager of the New Zealand police national electronic crime laboratory, said it was up to the United States to decide whether to extradite Walker, who goes by the cyber ID of AKILL. Organised crime in New Zealand — Ministry of Justice, New Zealand. On this page: The issues Factors impacting the current levels of organised crime in New Zealand include the country's traditionally low levels of corruption, its robust domestic law arrangements and enforcement, and its high degree of international cooperation in the area. 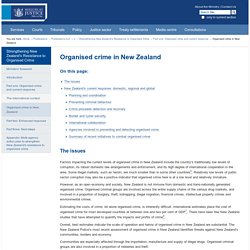 Some illegal markets, such as heroin, are much smaller than in some other countries6. Relatively low levels of public sector corruption may also be a positive indicator that organised crime here is at a low level and relatively immature. However, as an open economy and society, New Zealand is not immune from domestic and trans-nationally generated organised crime. Estimating the costs of crime, let alone organised crime, is inherently difficult. New Zealand Law Commission: IP37 Extradition and Mutual Assistance in Criminal Matters.

17.44MACMA should give effect to New Zealand’s existing international obligations to provide assistance. 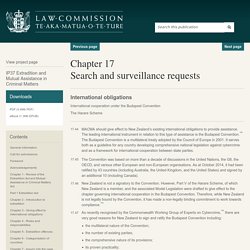 The leading international instrument in relation to this type of assistance is the Budapest Convention. The Budapest Convention is a multilateral treaty adopted by the Council of Europe in 2001. It serves both as a guideline for any country developing comprehensive national legislation against cybercrime and as a framework for international cooperation between state parties. 17.45The Convention was based on more than a decade of discussions in the United Nations, the G8, the OECD, and various other European and non-European organisations. As at October 2014, it had been ratified by 43 countries (including Australia, the United Kingdom, and the United States) and signed by an additional 10 (including Canada). 17.46New Zealand is not a signatory to the Convention.