FINAL WARNING: The Obama Deception & BIG EVENT IN 2015 (Prophecy Happening Now) WHAT HEAVEN LOOKS LIKE!!! PART 1 OF 2.... Shia LaBeouf Stars in Sia's New Music Video. IndustrialSurrealism. Killuminati - The Movie. In September 2015, Agenda 21 Will Be Transformed Into The 2030 Agenda. If you didn’t like “Agenda 21″, then you really are not going to like “The 2030 Agenda”. 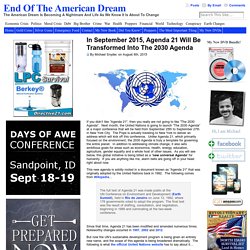 Next month, the United Nations is going to launch “The 2030 Agenda” at a major conference that will be held from September 25th to September 27th in New York City. The Pope is actually traveling to New York to deliver an address which will kick off this conference. Noahsark-CIA. Secret chemtrail operation “Indigo Skyfold” to go invisible late January. Editor’s note: Keep in mind there is no way to verify this claim. 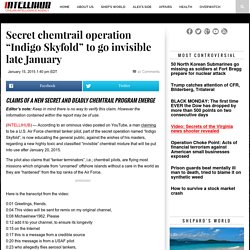 However the information contained within the report may be of use. (INTELLIHUB) — According to an ominous video posted on YouTube, a man claiming to be a U.S. New 666 Cube Logo & Kill List Revealed! ISIS Offers 100 Gold Dinars Per Head. February 4, 2015 By Susan Duclos - All News PipeLine With the horrifying release from ISIS of a 22 minute video showing Jordanian pilot Moaz al-Kasasbeh, locked in a cage and burned alive, along with reports that ISIS supporters, including children, gathered to watch the execution and cheering when the pilot went up in flames, not many are talking about what was shown at the end of the shocking execution video. 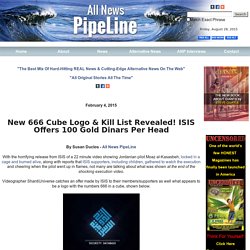 Videographer ShantiUniverse catches an offer made by ISIS to their members/supporters as well what appears to be a logo with the numbers 666 in a cube, shown below. The offer states, when translated to English "ON THIS OCCASION, THE ISLAMIC STATE OFFERS A REWARD OF 100 GOLD DINARS TO WHOEVER KILLS A CRUSADER PILOT. THE DIWAN FOR STATE SECURITY HAS RELEASED A LIST CONTAINING THE NAMES OF JORDANIAN PILOTS PARTICIPATING IN THE CAMPAIGN. The video then shows names, ranks and photos of the Jordanian pilots on the kill list of "most wanted" dead by ISIS.

Via the video details: Close Encounters with Celebrities And Show Business: Clones, satanists, prostitutes and serpents… dying for attention…. literally! Jaden Smith Says He is a Prophet and God Inspired his New Fashion Line 666. Jaden Smith, the son of rapper-actor legend Will Smith, has announced a new fashion line, which he titled “666.” 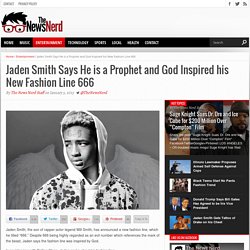 Despite 666 being highly regarded as an evil number which references the mark of the beast, Jaden says the fashion line was inspired by God. In an interview with Rolling Stone, Jaden spoke about his fashion line: “God exists in all things that surround the fire that burns in the sky. She is responsible for all spontaneous ideas. CIA and DIA Documents on Noah’s Ark Found!! You Will Be Floored By What They Contain… (Before It's News) (photo taken by DIA) By: Lisa Haven What are the chances of the CIA carrying documentation about Noah’s Ark a supposed ‘false’ event according to many in the government. 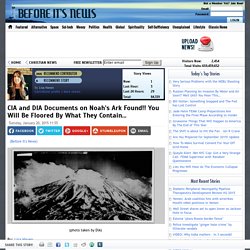 That would go against their very fiber! Yet this is exactly what I found. Trespasser Jumps Fence, Gets Stuck for Hours in Pipe at New Jersey Utility. Jaden and Willow Smith on Prana Energy, Time and Why School Is Overrated. Photo One of the gifts of being young is that particular blend of self-confidence and self-consciousness. 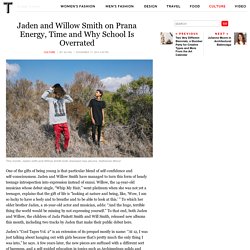 Jaden and Willow Smith have managed to turn this form of heady teenage introspection into expression instead of ennui. Sionstar: Really, ISON - back???!!! According to Russian press... Russia joined in 2015 during the Starfall of the quadrantid, which began on December 28, 2014. 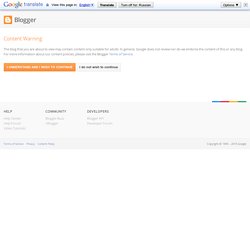 In order not to miss any one of these spectacular astronomical events, we present the Calendar of Russian. 2015". "Russian Starfall No. 1" can be observed from 1 to 7 January 2015. Source is the constellation of Bootes, or rather, the quadrantid radiant. Muslim found stuck in pipe in New Jersey water treatment reservoir. MANALAPAN TOWNSHIP, N.J., Jan. 17 (UPI) — A New Jersey man was rescued Friday after spending at least 4 hours trapped in an empty pipe at a water treatment plant, authorities said.Officials said Asef Mohammad, 26, of Manalapan Township scaled a chain-link and barbed-wire fence surrounding a United Water facility not far from his home, then climbed into a holding tank to reach a decommissioned 20-inch-diameter pipe, where he got stuck, the Asbury Park Press reported. 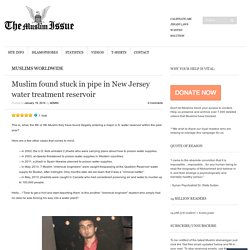 Why he did it was still a mystery to officials. “There is no reason for anyone whatsoever to climb into a pipe,” said Rich Henning, a spokesman for United Water.