Grasshopper. (As reported earlier in this previous post) Daniel Piker is developing ways to accurately simulate physical behavior in his Grasshopper component "Kangaroo". 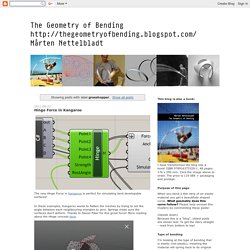 In the latest release there are tools for simulating bending geometry. This is nothing but a revolution for this investigation! Never before have I been able to recreate bending geometry so accurately in an "artificial way". At the moment Kangaroo works very accurately for 2d-bending with both fixed and hinged ends and also in 3d for rods. 3d-bending of developable surfaces is a little more tricky and requires a careful setup to make sure the surfaces stay developable. Kangaroo works in an iterative way by letting some predefined forces (like springs, bending resistance, pressure and gravity) affect the geometry, step by step, until (usually) a stable solution is reached. For more reading on how Kangaroo deals with bending, Daniel Piker has recommended a paper written in 1998 by S.M.L. Program Lab. Designplaygrounds.com. ComputationalMatter. 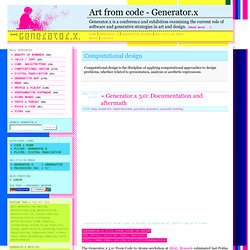 Digital fabrication (also known as “fabbing”) represents the next step in the digital revolution. After years of virtualization, with machines and atoms being replaced by bits and software, we are coming full circle. Digital technologies like rapid prototyping, laser cutting and CNC milling now produce atoms from bits, eliminating many of the limitations of industrial production processes. For artists and designers working with generative systems, digital fabrication opens the door to a range of new expressions beyond the limits of virtual space. Call for participants Generator.x & Club Transmediale. Grupo de Diseño Emergente. Daniel Widrig. Rhino ++ Grasshopper – Plethora Project.

Plethora-Project.com is an initiative to accelerate computational literacy in the frame of architecture and design. 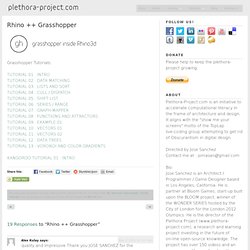 It aligns with the "show me your screens" motto of the TopLap live-coding group attempting to get rid of Obscurantism in digital design. Directed by Jose Sanchez Contact me at : jomasan@gmail.com Bio: Jose Sanchez is an Architect / Programmer / Game Designer based in Los Angeles, California. He is partner at Bloom Games, start-up built upon the BLOOM project, winner of the WONDER SERIES hosted by the City of London for the London 2012 Olympics. Muehlseife. The aim of the project is to question the role of computer-aided design methods in urban development, to ask in which parts of the design process the use of the computer can be appropriate. 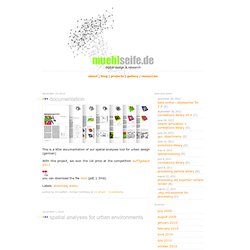 While commonly the focus of most computer aided design sotware is on drawing layouts, that are defined by various analog methods, it does not give the designer any information about the quality of the design itself. The developed tool assists the designer in an early step of the design process, where basic principles of the layout are defined. While the conditions of the design regarding light, spatial, geometrical and urbanistic context are displayed, it can be addapted in real-time.

Www.christopherwhitelaw.us. Experiments. Michael Hansmeyer - Computational Architecture: Publications. Designalyze - designalyze: the analysis of design. SJET. Re-Thinking CAD Standards: Why there’s never a good time, and never a better time… After several months of blood, sweat and tears, we are very happy to share with you a free download of our CAD Standards, the Electronic File Naming Convention and the Project Folder Organisation we will be using at HDA, with immediate effect. 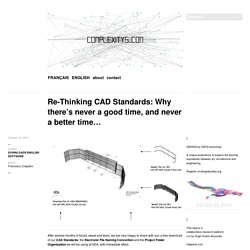 We are a hybrid team of architects, designers and engineers. Even though we strongly believe in this interdisciplinary approach, we understand that it presents difficulties in achieving coherence and clarity in our management systems. The files we are sharing today with our readers are the first outcome of a thorough review and coordination process intended to make our different design tools and activities more coherent. As noted elsewhere on this blog, at HDA we believe in an open culture, that sharing content can be useful, productive and not anti-economic, and therefore offer these free to download in the hope that they may be useful to others.As noted earlier, HDA is a French company. Curved Folding - foldable=makable. SgHome. NeoArchaic Design. Inicio - SMARTCITY. DEFINITIONS « Explode_BReps @ UVa. Arquitecturadevoltereta.

A-ngine. RhinoFabLab - Design + Optimization + Fabrication. MORPHOCODE. Designcoding. This is a starting point of pattern generation study in a dataflow environment. 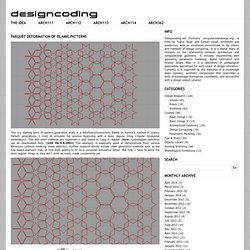 Based on Hankin’s method of Islamic Pattern generations, I tried to simulate his process beginning with a basic regular tiling (regular hexagonal tessellation). This and other methods are explained in phD thesis of Craig S. Kaplan (here) Grasshopper definition can be downloaded here: [GHX file:0.8.0063] This approach is especially good at deformations from various attractors (without breaking linear stability). Further research should include other generation methods such as the rule-based approach that, at first sight seems to fit on a computer simulation better. But first, I have to solve the semi-regular tilings as they don’t exist as ready-made components yet. Update: I’ve optimized the definition. SMD Arquitectes. Massive Grasshopper Attack!

P i n u p s p a c e. Rhinoscript. Posts Tagged ‘Rhinoscript’ This simple rhinoscript, developed to randomize sets of objects for material application in rendering, allows the user to select a set of objects and place them into a user specified number of groups. 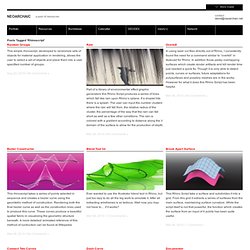 Part of a library of environmental effect graphic generators this Rhino Script produces a series of lines which fall like rain upon Rhino’s cplane. If a droplet hits there is a splash. The user can input the number clusters where the rain will fall from, the relative radius of the cluster, the percentage of the way that the rain can fall short as well as a few other conditions. Grasshopper (Explicit History) Same Area Voronoi using Galapagos I have been quite fascinated by the recent development of Galapagos for Grasshopper. 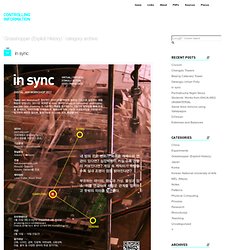 This is a simple example of its application set up to solve for a 10-point voronoi division within a user-defined boundary where all the parts are divided as equally as possible in terms of their areas. I ran this with an initial population of a hundred for 200 generations. Experimental Studio: Energy, Design, Architecture & Programming. Architecture - Design - Computation. Antonio Turiello. Fabrication » Grasshopper: Visual Introduction. Archpaintvisuals. Grasshopper Modules - Proxy Wiki. From Phylogenesis, FOA 2003 The following Grasshopper modules were created in consultation with FOA's Phylogenesis, in particular the taxonomy of forms found at the conclusion of the book. 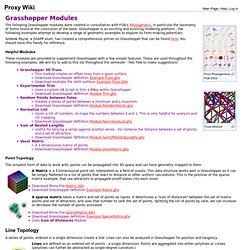 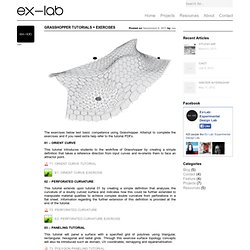 Attempt to complete the exercises and if you need extra help refer to the tutorial PDFs. This tutorial introduces students to the workflow of Grasshopper by creating a simple definition that takes a reference direction from input curves and re-orients them to face an attractor point. This tutorial extends upon tutorial 01 by creating a simple definition that analyses the curvature of a doubly curved surface and indicates how this could be further extended to manipulate material qualities to achieve complex double curvature from perforations in a flat sheet. Information regarding the further extension of this definition is provided at the end of the tutorial. Hybridbiostructures: DigiHYBIOS 1.0 & AnaHYBIOS 3.0 / New Approach: From Digital FormFinding to Analogue Methods. With the latest HYBIOS, we adopted a new approach. This time the experiment was based on a digital FormFinding algorithm using Daniel Piker's Kangaroo Plugin for Grasshopper.

The new experiment also resolved some of the issues of the previous experiment. WooJae's Blog. Andrea Graziano Twitter. GH hexagonal mesh 01. With this definition we can plot all kinds of patterns formed by planar closed curves on a surface with double curvature achieving this effect of skin with variable apertures depending on their distance to one or more points attractors. The script works optimizing meshes to obtain a smooth skin using weaverbird component. MATSYS. Makeahybrid. The disContinuum - grasshopper. ParametricModel - a library of parts.

Terreform ONE (Open Network Ecology) RHINO: GRASSHOPPER DEFINITIONS - RHINO / GH. This definition was developed for my final thesis project to generate a louver system based on functional requirements within the building. The performance was then tested in Ecotect. A large part of my thesis design involved invertible arena seating with many moving parts. I used Grasshopper as a means to develop the seating testing clearances, site lines, and many other variables. This definition looks at taking any curved surface, and generating weaving geometry across it. The parametric skyscraper uses Grasshopper to generate the entire structure. A technology publication created & maintained by case. Grasshopper tutorials. Grasshopper tools in C#

Blog Archive » Attracted Flows. This is a rhinoscript where you can set various points where vectors flow out from according to a certain velocity. As these vectors travel, the flows are attracted to the various attractor points in different weights three dimensionally. It simulates a close logic to the emitted particles being attracted to newton forces in Maya.

Option Explicit ‘Script written by Howard Jiho Kim / crtl-i.com Call Main() Supermanoeuvre. ReVault is a project that implements a new methodology for the design, fabrication, and construction of unreinforced thin-shell stone vaulting through the use of algorithmic form-finding techniques and multi-axis robotic water jet cutting. The techniques build upon traditional thin-shell masonry vaulting tectonics with a masonry system capable of self-support during construction. The methodology may also reduce the labor cost of vault construction, while expanding the application of thin-shell vaulting to irregular forms that may respond to external factors such as siting constraints and environmental criteria. The intent of the research is to reignite and reanimate unreinforced compressive masonry vaulting as a contemporary building practice and to expand its application through the addition of formally-driven criteria.