Sons of the Sanussi. A violent and unhinged dictator has used overwhelming air power and foreign mercenaries to mow down Libyans who dare protest against his tyranny. 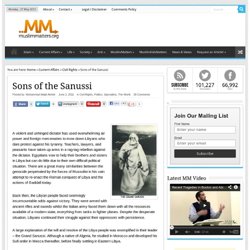 Teachers, lawyers, and peasants have taken up arms in a rag-tag rebellion against the dictator. Egyptians vow to help their brothers and sisters in Libya but can do little due to their own difficult political situation. There are a great many similarities between the genocide perpetrated by the forces of Mussolini in his vain attempt to re-enact the Roman conquest of Libya and the actions of Gaddafi today. Back then, the Libyan people faced seemingly insurmountable odds against victory.

They were armed with ancient rifles and swords whilst the Italian army faced them down with all the resources available of a modern state, everything from tanks to fighter planes. Free of Alcohol? - IBlog - Culture & Entertainment. The End: The Anniversary of the Abolition of the Caliphate. This year on the 4th of March was the 86th Anniversary of an event so momentous that we are still feeling the after-shocks of it today. 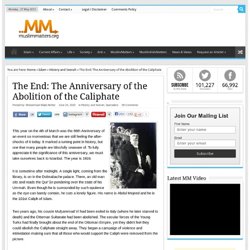 It marked a turning point in history, but one that many people are blissfully unaware of. To fully appreciate it the significance of this anniversary, we must take ourselves back to Istanbul. The year is 1924. It is sometime after midnight. A single light, coming from the library, is on in the Dolmabache palace. Two years ago, his cousin Muḥammad VI had been exiled to Italy (where he later starved to death) and the Ottoman Sultanate had been abolished.

Finally, on the night of March 4th, they made their move. Necmettin Erbakan: Father of the Turkish Evolution. On the 27th of February 2011, an 86 year old Turkish man died in a hospital in Istanbul. However, he was no ordinary person. The Revolution Within My Soul-Lessons from Tahrir. Groups of young activists marched through the streets of Cairo, Alexandria and Ismailia. They were waving placards denouncing Hosni Mubarak and calling for the overthrow of the corrupt political system that had held them in virtual enslavement. They had been building to this point for many years now and had planned long and hard for this moment. Some of them had been arrested, some of them had been tortured and some had been killed – yet they continued to organize. Now, they were out on the streets and their goal was clear – Liberation (Tahrir) Square. I watched them utilize the internet and social media to organize a revolution and wondered how come all I had managed to do was to waste time on the same sites.

A line of the dreaded secret police stood between the protesters and Tahrir Square. They lined up shoulder to shoulder, feet to feet and turned their face away from those that claim to rule them and towards that of their Lord. It is past midnight. My Encounter With Brian Haw - the Stalwart Peace Activist. Brian Haw was an English peace campaigner and activist. 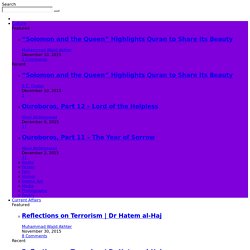 He spent the last ten years of his life camped outside the Parliament in London protesting against any perceived injustice. His one man vigil made him into a celebrity in the UK where his tenacity and determination won him widespread admiration. He died of lung cancer on the 18th of June 2011. Even nerds need fresh air every once in a while. And so it was, on a balmy Thursday evening – a couple of friends and I found ourselves eating ice cream in Central London.

Female Tourists in Arab World: Uncovered Report - Places - Culture & Entertainment. When I first started travelling the Muslim world with my wife I decided to do my homework and read up about what it would be like to visit these countries. 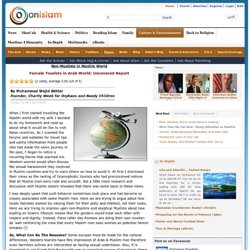 As I scanned the forums and websites for travel tips and useful information from people who had made the same journey in the past, I began to notice a recurring theme that alarmed me. Western women would often discuss the sexual harassment they received in Muslim countries and try to warn others on how to avoid it. At first I dismissed their views as the ranting of Islamophobic tourists who had preconceived notions that all Muslim men were rude and uncouth.

But a little more research and discussion with Muslim sisters revealed that there was some basis to these views. I was deeply upset that such behavior sometimes took place and had become so closely associated with some Muslim men. So, What Can Be The Reasons? A friendly and enthusiastic vendor or guide can quickly be seen as over-familiar and intimidating. But, Respecting Women is… Book Review: The Character Assassination of Malcolm X. Since I was a young boy growing up, the story of Malcolm X captivated me. 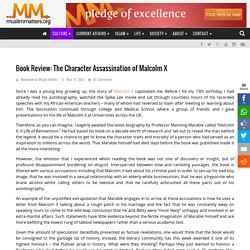 Before I hit my 13th birthday, I had already read his autobiography, watched the Spike Lee movie and sat through countless hours of his recorded speeches with my African-American teachers – many of whom had reverted to Islam after meeting or learning about him. The fascination continued through college and Medical School, where a group of friends and I gave presentations on the life of Malcolm X at Universities across the UK. Donuts Or Dignity? - IBlog - Culture & Entertainment. 5 Historic Events During Ramadan that Rocked the World. Ramadan 2012 Posts We all know that Ramadan is the month of fasting, abstinence and reflection. 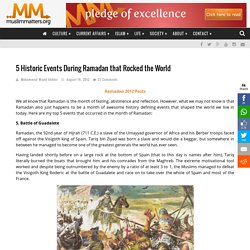 However, what we may not know is that Ramadan also just happens to be a month of awesome history defining events that shaped the world we live in today. 3 Ramadan Traditions at Risk of Extinction. Ramadan2012 Posts Over the course of the last 1400 years, Muslims have developed various traditions for the month of Ramaḍān. 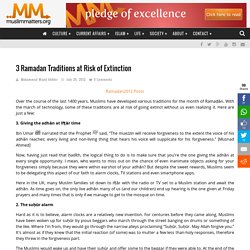 With the march of technology, some of these traditions are at risk of going extinct without us even realizing it. Here are just a few: 3. 4 Ways that London 2012 Made Muslims Feel Welcome. Every time you look at the news, you can't help but be hit by at least one Islamophobic story. Well, at least that is the way I felt for a long time. Whether it was a scare over how halal food was infiltrating British supermarkets or indignation over how Muslims were all inherently bent on the violent destruction of Western civilization – I despaired of ever seeing Muslims being treated with a modicum of decency and respect.

Then came the London Olympics and I was pleasantly surprised to find an altogether different picture. 3 New Ramadan Traditions that Should be Ditched. Ramadan 2012 Posts Every age has its own specific Ramadan traditions. In times gone by, this would include laying a sheet of food outside the veranda of the house so that passing travelers and poor people would be tempted to come in and break their fast with better food than would be available to them at the time. In other areas they would put out special lamps in the streets to light the way for those on their way to the mosque. However, not all traditions are good and these days we have our fair share of horrible traditions that need to be ditched. 3.

5 Examples of Supreme Muslim Tolerance. As we see the images of burning embassies and burnt flags unfolding across the Muslim world, it is easy for non-Muslims (and some Muslims too) to jump to the conclusion that there is an inherent lack of tolerance amongst “religious” Muslims. 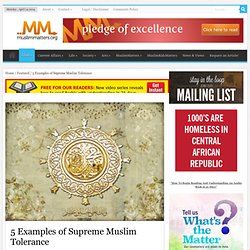 A lot of this is down to the hypocrisy of trying to judge others by standards that are completely your own. Generally speaking, just because the West tolerates blasphemy on a grand scale, this does not mean that people who condemn blasphemy are necessarily intolerant. Some of it is down to pure Islamophobia, in which Muslims are seen as irrational, violent, and pathological zealots. 5 things Muslims can learn from Christmas. There will usually be two types of reactions to the title of this article. 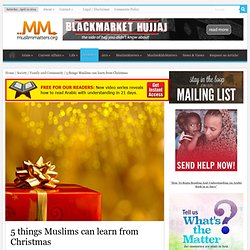 The first will be along the lines of, “Finally. Someone who agrees that there's nothing wrong with celebrating Christmas and having a tree, turkey, Christmas cards etc…” The second will be along the lines of “Astaghfirullāh. How can Muslims learn anything from a non-Muslim holiday?” 5 Benefits of Volunteering. Volunteering is a beneficial and productive form of sadaqa , or helping give to those in need. Not only are you benefitting others, you are earning reward, and – a fact that is often overlooked – learning how to become more productive in your everyday life.

Here are 5 ways that volunteering encourages those who are involved to become more productive Muslims: 4 Reasons Why Muslims Shouldn’t Celebrate New Year’s. Every year, a large number of Muslims get into the festive spirit and celebrate New Year's day. 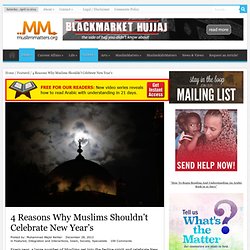 Whether it's Facebook status updates, Twitter messages or even holding New Years eve parties – many Muslims (especially, but not exclusively in the West) go the whole 9 yards when it comes to ringing in the New Year. But is this a harmless innovation or the first step on a slippery slope? 5 beneficial ways Muslims can spend the holidays.

So it's that time of year again. When the days are short, the nights long and you have large amounts of time off from your school/ college/ workplace for Christmas/ New Year etc… We may take advantage of being able to lie in till later than usual, laze around the house in our pajamas well past Dhuhr and slowly catching up with TV shows, chores or career related assignments. Essentially, this will be a few days off like any other few days off in the years before. We'll trudge back to our normal lives with little to show apart from a slightly expanded waistline and the reduced bags under our eyes. Sanussi Spirit: History Speaks About Libya - History - Culture & Entertainment.

But there is only one place that literally has the right to proclaim itself heaven on Earth. Ten Things You Didn’t Know About The Kaaba. The Change We Need... - IBlog - Culture & Entertainment.