EPFO Members may Get Option to Draw Pension After 60. India Turns Net Copper Importer for First Time in 18 yrs. Meeting to increase GST collection. GST had ‘adverse’ effect on realty sector. After PMC Shock, Work Starts on Stronger Rules for Coops. GST Network to release new version of return filing interface on 22 October. GST a major cause of slowdown, says PMEAC chairman. Govt orders biggest review of GST since its launch. IT firms building talent to woo Non-English markets. Exempt premium payable on group medical insurance of retirees from GST. It’s Not All Turbulence for Luxury Goods Market. Companies gear up for lesser use of plastic in their business. While bank credit numbers have been weak in FY19, broader data released by the Reserve Bank of India (RBI) shows that financing of business shrunk 87% in FY20 up to mid-September. 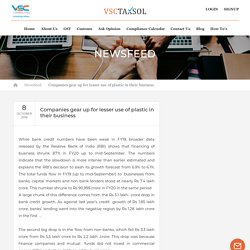 The numbers indicate that the slowdown is more intense than earlier estimated and explains the RBI’s decision to slash its growth forecast from 6.9% to 6.1%. The total funds flow in FY19 (up to mid-September) to businesses from banks, capital markets and non-bank lenders stood at nearly Rs 7.4 lakh crore. This number shrunk to Rs 90,995 crore in FY20 in the same period A large chunk of this difference comes from the Rs 3.1-lakh- crore drop in bank credit growth.

PwC India to Challenge ED’s Penalty. Ahead of Festive Season, PSBs to go on Lending Spree. In a bid to push credit before the festival season and revive growth, the government has asked state-run banks to hold open houses in 400 districts of the country, tasking them with extending credit to five new customers for every existing borrower.By September 29, as the festival season kicks in, banks will hold public gatherings in 200 districts along with the NBFCs they support to push credit to self-help groups, MUDRA borrowers, customers looking for vehicle and housing loans, MSMEs and farmer producer organisations. 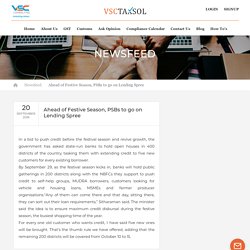 “Any of them can come there and that day, sitting there, they can sort out their loan requirements,” Sitharaman said. The minister said the idea is to ensure maximum credit disbursal during the festive season, the busiest shopping time of the year. For every one old customer who wants credit, I have said five new ones will be brought. That’s the thumb rule we have offered, adding that the remaining 200 districts will be covered from October 10 to 15. Tax Sops May Push Personal Users to Opt for Electric Vehicles. CCI keep close eyes on Ecomm deep discount. 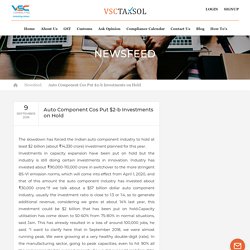 Industry has invested about ₹90,000-110,000 crore in switchover to the more stringent BS-VI emission norms, which will come into effect from April 1, 2020, and that of this amount the auto component industry has invested about ₹30,000 crore. “If we talk about a $57 billion dollar auto component industry, usually the investment ratio is close to 1:3 or 1:4, so to generate additional revenue, considering we grew at about 14% last year, this investment could be $2 billion that has been put on hold.Capacity utilisation has come down to 50-60% from 75-80% in normal situations, said Jain. This has already resulted in a loss of around 100,000 jobs, he said. SBI to review deposits ,rejig repo-linked loan. SBI will review its existing repo rate-linked home loan following the RBI directive that all retail loans should be linked to an external benchmark. 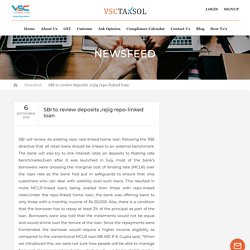 The bank will also try to link interest rates on deposits to floating rate benchmarks.Even after it was launched in July, most of the bank’s borrowers were choosing the marginal cost of lending rate (MCLR) over the repo rate as the bank had put in safeguards to ensure that only customers who can deal with volatility avail such loans. This resulted in more MCLR-linked loans being availed than those with repo-linked rates.Under the repo-linked home loan, the bank was offering loans to only those with a monthly income of Rs 50,000. Also, there is a condition that the borrower has to repay at least 3% of the principal as part of the loan. Borrowers were also told that the instalments would not be equal and would shrink over the tenure of the loan. PPF, NSC rates may be lowered after RBI move. Systemically important NBFCs to come under tighter RBI scrutiny.

Road ministry seeks GST rate cut for hybrid cars and CNG vehicles. HC refers to Jaitley , tells DU not to be too harsh on student leaders. Stern action if GST returns are not filed, warns Chief Commissioner. Taxpayers should file their GST returns for 2017-18 by August 31 and failure to do so will attract very severe consequences, including hefty penalty.Though only 15 days of time was left, 80% of traders have not filed it so far. 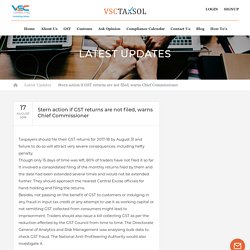 It involved a consolidated filing of the monthly returns filed by them and the date had been extended several times and would not be extended further. They should approach the nearest Central Excise officials for hand-holding and filing the returns.Besides, not passing on the benefit of GST to customers or indulging in any fraud in input tax credit or any attempt to use it as working capital or not remitting GST collected from consumers might lead to imprisonment. Traders should also issue a bill collecting GST as per the reduction effected by the GST Council from time to time. The Directorate General of Analytics and Risk Management was analysing bulk data to check GST fraud. 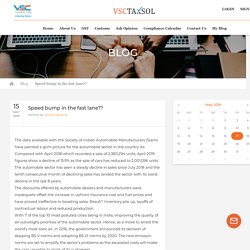 As Compared with April 2018 which recorded a sale of 2,380,294 units, April 2019 figures show a decline of 15.9% as the sale of cars has reduced to 2,001,096 units. The automobile sector has seen a steady decline in sales since July 2018 and the tenth consecutive month of declining sales has landed the sector with its worst decline in the last 8 years. The discounts offered by automobile dealers and manufacturers were inadequate offset the increase in upfront insurance cost and fuel prices and have proved ineffective in boosting sales. Result? Inventory pile up, layoffs of contractual labour and reduced production.