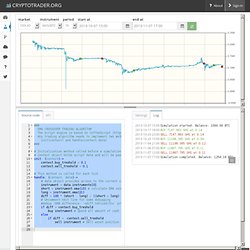 We aim to provide an API that allows developer to write fully featured trading algorithms. Our automated trading platform can backtest and execute trading scripts coded in CoffeeScript language on historical data. Trading API Each script has to implement the following two methods: init(context) Initialization method called before a simulation starts.

Bitcoin Exchange, Namecoin Exchange, Litecoin Exchange, BTC Exchange. New Trading Platform for Bitcoin, Other Digital Currencies. Trading BOT. CEX.IO. New Trading Platform for Bitcoin, Other Digital Currencies. ROBOTS. Bitcoin automated trading explained - Elite Trader. This is a redditor explaining how he and his bots trade bitcoin, taken from a long Reddit thread: His bots: "To preface this I'll say that I'm a systems programmer and mathematician, and my interest in writing the bots is as much academic interest in analyzing the market as it is financial. 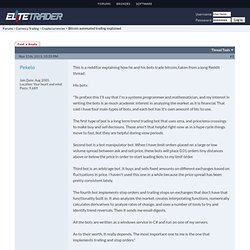 That said I have four main types of bots, and each bot has it's own amount of btc to use. The first type of bot is a long term trend trading bot that uses ema, and price/ema crossings to make buy and sell decisions. These aren't that helpful right now as in a hype cycle things move to fast, but they are helpful during slow periods. Second bot is a bot manipulator bot. Third bot is an arbitrage bot. The fourth bot implements stop orders and trailing stops on exchanges that don't have that functionality built in. 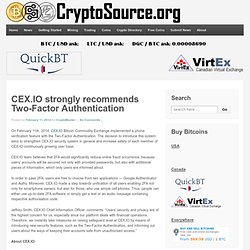 The decision to introduce this system aims to strengthen CEX.IO security system in general and increase safety of each member of CEX.IO continuously growing user base. CEX.IO team believes that 2FA would significantly reduce online fraud occurrence, because users’ accounts will be secured not only with provided passwords, but also with additional pieces of information, which only users are informed about. In order to pass 2FA, users are free to choose from two applications — Google Authenticator and Authy. Moreover, CEX.IO made a step towards unification of all users enabling 2FA not only for smartphone owners, but also for those, who use simple cell phones. Thus, people can either use up-to-date 2FA software or simply get a text or an audio message containing respective authorisation code. Bitcoin Mining: Web & Computer Services.

Automated trading on CEX.IO. Mining Dashboard - The Genesis Block. P2Pool. Visualization of the P2Pool share chain P2Pool is a decentralized Bitcoin mining pool that works by creating a peer-to-peer network of miner nodes. 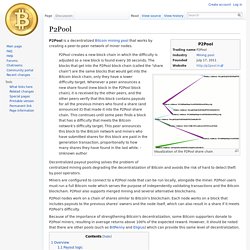 P2Pool creates a new block chain in which the difficulty is adjusted so a new block is found every 30 seconds. The blocks that get into the P2Pool block chain (called the "share chain") are the same blocks that would get into the Bitcoin block chain, only they have a lower difficulty target. Whenever a peer announces a new share found (new block in the P2Pool block chain), it is received by the other peers, and the other peers verify that this block contains payouts for all the previous miners who found a share (and announced it) that made it into the P2Pool share chain. This continues until some peer finds a block that has a difficulty that meets the Bitcoin network's difficulty target.

Miners are configured to connect to a P2Pool node that can be run locally, alongside the miner. Overview Payout logic Stales Joining the pool. Is it correct to assume that the price of cloud GH/S will vary proportionally with the difficulty change. Current community your communities Sign up or log in to customize your list. more stack exchange communities Stack Exchange sign up log in tour help Bitcoin beta Ask Question Take the 2-minute tour × Bitcoin Stack Exchange is a question and answer site for Bitcoin crypto-currency enthusiasts. 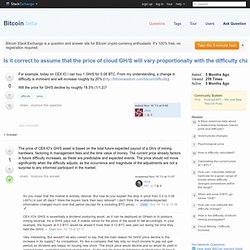 Is it correct to assume that the price of cloud GH/S will vary proportionally with the difficulty change? 1 Answer active oldest votes Your Answer. CEX.IO - A New Way of Investing in Bitcoin Mining. Disclaimer: As always, do not take any financial advice from anyone without proper due diligence. 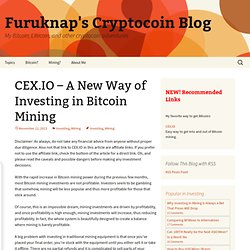 Also not that link to CEX.IO in this article are affiliate links. If you prefer not to use the affiliate link, check the bottom of the article for a direct link. Oh, and please read the caveats and possible dangers before making any investment decisions. With the rapid increase in Bitcoin mining power during the previous few months, most Bitcoin mining investments are not profitable. Investors seem to be gambling that somehow, mining will be less popular and thus more profitable for those that stick around. Of course, this is an impossible dream; mining investments are driven by profitability, and once profitability is high enough, mining investments will increase, thus reducing profitability. A big problem with investing in traditional mining equipment is that once you’ve placed your final order, you’re stuck with the equipment until you either sell it or take it offline.