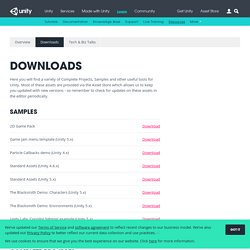 Start Creating Games In No Time With Unity3D Free. The world of video games has gone through many changes in the relatively short time it’s been around. 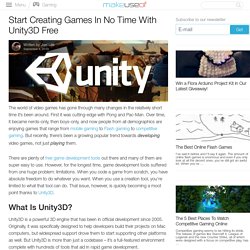 First it was cutting-edge with Pong and Pac-Man. Over time, it became nerds-only, then boys-only, and now people from all demographics are enjoying games that range from mobile gaming to Flash gaming to competitive gaming. But recently, there’s been a growing popular trend towards developing video games, not just playing them. There are plenty of free game development tools out there and many of them are super easy to use. However, for the longest time, game development tools suffered from one huge problem: limitations. What Is Unity3D? Unity3D is a powerful 3D engine that has been in official development since 2005.

You can see in the screenshot above that the application editor is split into numerous panels: A Scene panel that shows a visual representation of all Game Objects in the current Scene. Reasons to Use Unity3D FREE. Unity3D Features What exactly can Unity3D do? Conclusion. Best Unity Procedural Generation Tutorials? Best Unity Procedural Generation Tutorials? 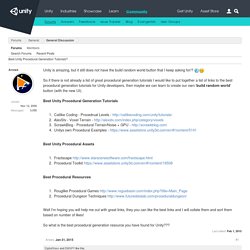 Discussion in 'General Discussion' started by Arowx, Jan 31, 2015. Arowx Joined: Nov 12, 2009 Messages: 3,056 Unity is amazing, but it still does not have the build random world button that I keep asking for!? So if there is not already a list of great procedural generation tutorials I would like to put together a list of links to the best procedural generation tutorials for Unity developers, then maybe we can learn to create our own 'build random world' button (with the new UI).Best Unity Procedural Generation Tutorials Best Unity Procedural AssetsBest Procedural Resources Well I'm hoping you will help me out with great links, they you can like the best links and I will collate them and sort them based on number of likes! So what is the best procedural generation resource you have found for Unity??? Last edited: Feb 1, 2015 Arowx, Jan 31, 2015 #1 DigitalGlass and EMGPY like this.

Members Quick Links. Maze, a Unity C# Tutorial. In this tutorial we'll generate a maze with multiple distinct areas and navigate through it. 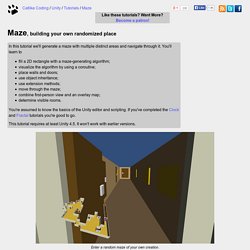 You'll learn to fill a 2D rectangle with a maze-generating algorithm; visualize the algorithm by using a coroutine; place walls and doors; use object inheritance; use extension methods; move through the maze; combine first-person view and an overlay map; determine visible rooms. You're assumed to know the basics of the Unity editor and scripting. If you've completed the Clock and Fractal tutorials you're good to go. This tutorial requires at least Unity 4.5. It won't work with earlier versions. Random Mazes You've probably seen quite a few randomly generated mazes, either in digital form or in print. It's time to generate our own maze! Press space to restart the maze generation. Game Flow If we were to make a game, we would first have to generate a maze and then spawn a player avatar that can navigate that maze. Our GameManager component simply begins the game when its Start method is called.