Love Me Twice, a harry potter fanfic. A/n: this is my present for Amanda (fugitivekind on tumblr) for helping me with my blog! 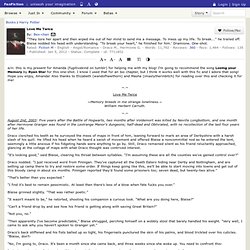 I'm going to recommend the song Losing your Memory by Ryan Star for this one-shot. I know I used that for an Iso chapter, but I think it works well with this fic and I adore that song! Hope you enjoy, Amanda! Also thanks to Elizabeth (wandofhawthorn) and Masha (imaslytherinbitch) for reading over this and checking it for me! Silhouettes, a harry potter fanfic.

A/n: Just a little one-shot for Vivian (pink-martini). it's an idea I've wanted to try for a while, so yeah, hope it's alright! 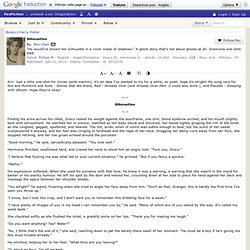 My song recs for this are Mumford and Sons - Ghosts that We Knew, Red - Already Over (and Already Over Part. 2 could also work.), and Placebo - Sleeping with Ghosts. Hope they're okay! Little, Fragile Toys, a harry potter fanfic. A/n: Hello! 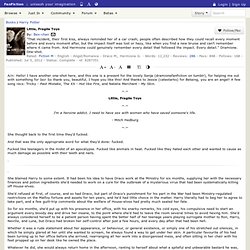 I have another one-shot here, and this one is a present for the lovely Senja (dramionefanfiction on tumblr), for helping me out with something for Iso! So thank you, beautiful, I hope you like this! And thanks to Jessie (catestarks) for Betaing, you are an angel! A few song recs: Tricky - Past Mistake, The XX - Hot like Fire, and Natalie Merchant - My Skin. Little, Fragile Toys I'm a heroine addict. . - Mitch Hedburg She thought back to the first time they'd fucked. And that was the only appropriate word for what they'd done: fucked. Fucked like teenagers in the midst of an apocalypse. She blamed Harry to some extent.

Flying Lessons, a harry potter fanfic. Disclaimer- I don't own Harry Potter or anything affiliated with Harry Potter. 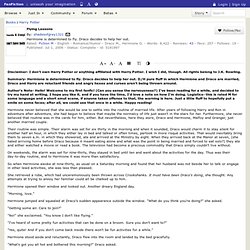 I wish I did, though. All rights belong to J.K. Rowling. Summary- Hermione is determined to fly. Draco decides to help her out. Summer of the Dragon Chapter 1, a harry potter fanfic. A/N: Hi everyone! 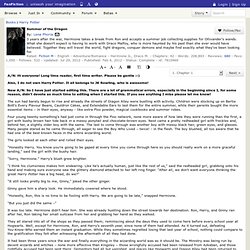 Long time reader, first time writer. Please be gentle :-) Also, I do not own Harry Potter. It all belongs to JK Rowling, who is awesome! New A/N: So I have just started editing this. The sun had barely begun to rise and already the streets of Diagon Alley were bustling with activity. Four young twenty-something's had just come in through the Floo network, none more aware of how late they were running than the first, a girl with bushy brown hair tide back in a messy ponytail and chocolate-brown eyes.

The girls looked at each other and rolled their eyes. "Honestly Harry. "Sorry, Hermione. " "I think his clumsiness makes him endearing. "It still looks pretty big to me, Ginny," joked the other ginger. Ginny gave him a sharp look. "Honestly, Ron, this is no time to be fooling with Harry. "But you just did the same –" It was too late. They all stared into all of the shops as they passed them; reminiscing about the days they used to come here before every school year at Hogwarts.

Hunted Chapter 1: Changes, a harry potter fanfic. A/n: Okay so this is my first HP fic so excuse me if there's a few errors with characters etc. 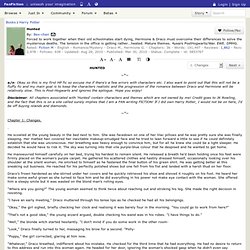 I also want to point out that this will not be a fluffy fic and my main goal is to keep the characters realistic and the progression of the romance between Draco and Hermione will be relatively slow. This is Post-Hogwarts and ignores the epilogue. Hope you enjoy! Disclaimer: All chapters associated with 'Hunted' contain characters and themes which are not owned by me! Bad Word, a harry potter fanfic. Disclaimer: Harry Potter, names, and places are copyright JK Rowling. 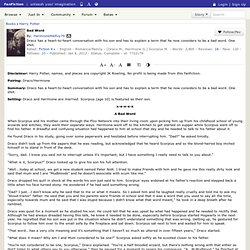 No profit is being made from this fanfiction. Pairing: Draco/Hermione Summary: Draco has a heart-to-heart conversation with his son and has to explain a term that he now considers to be a bad word. Aurelian Chapter 1: Prologue, a harry potter fanfic. This fanfic is finished! 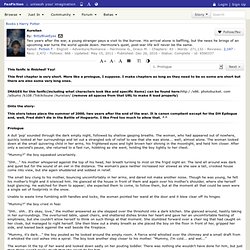 Yay! This first chapter is very short. The Third Time is the Charm Chapter 1: How This Came To Be, a harry potter fanfic. Disclaimer: Ms. 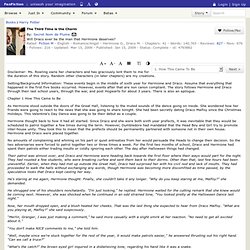 Rowling owns her characters and has graciously lent them to me for the duration of this story. Random other characters (in later chapters) are my creations. Setting/Background Information: These events begin in the middle of sixth year for Hermione and Draco. Assume that everything that happened in the first five books occurred. Slytherdor-Patronus. Daylight Through Darkness Chapter 1: Prologue, a harry potter fanfic.

It has been four months since the second wizarding war ended. 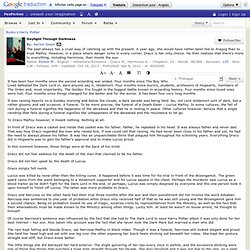 Four months since The Boy Who Lived defeated the Dark Lord or, dare anyone say it, Voldemort. Four months since Aurors, students, professors of Hogwarts, members of The Order and, most importantly, The Golden Trio fought in the biggest battle known in wizarding history. Four months since loved ones were lost. Four months since things changed for the better and for the worse. Redemption. Redemption If there was one thing Hermione prided herself in, it was her ability to cope with the obstacles life constantly threw at her. And today, her conflict revolved around the fourth floor of St. Mungo's—the wing dedicated to Spell Damage. Turncoat. Author's Note: Hello! I've decided to try to keep my chapters for this story a bit shorter than the ones I've written for Vengeance, because I know that long chapters can be intimidating or just plain tiring to read.

Therefore, I'm going to make it a goal to keep these ones less lengthy. Oh, and I feel less inspired, so these chapters will just have to go without titles. Hope you don't mind! We Learned the Sea. Disclaimer: I don't own Harry Potter or any part of his world. It's fun to be here, though! Note: The title of the story, "We Learned the Sea," is the title of a song by the amazing Dar Williams Chapter 1 – The Enemy Walks In Draco Malfoy was the most wanted man in the Wizarding world, allowing for the fact that Voldemort wasn't actually human. If he were, Draco Malfoy would be wanted man number two. It was now four years since he had stood on the astronomy tower at Hogwarts School of Witchcraft and Wizardry and failed to kill the Headmaster of the school.

Draco grew in power and skill, advancing through the ranks slowly at first, but in the last year and a half he'd shot up to stand beside the Dark Lord as just less than an equal, Voldemort's go-to guy. But fight they did. But shouldn't Lucius be proud? After the fight, Narcissa knew who was the victor. When she saw the results of her son defeating her husband, Narcissa emptied herself. Then there were his guests to consider. O. The Serpent, the Witch and the Broom Closet. Disclaimer: I do not own Harry Potter or any of it's characters, books, movies, images, etc. Friday, June 19th, 1998 It was over. Finally over. Completely, utterly over. The wizarding world had breathed a collective sigh of relief that night not long ago in which Voldemort had fallen, the news spreading faster than wildfire.

Hogwarts had held strong around them as students had cried in relief, parents clutching them tightly and knowing that despite all the sadness, the pain, the trauma, it was going to be alright in the end. Hermione Granger wandered along the almost empty sun-lit corridors of Hogwarts, a gleam of sadness in her eyes as she walked the halls that were so familiar. Isolation. Summary: Post HBP. Ron and Harry are Horcrux hunting and Hermione has been left at Hogwarts to help the Order make it safe for the other students. Draco is forced by Snape to stay in Hogwarts for his own protection, but he can't leave the room he is given; Granger's room. Hermione is the only student trusted with this information, so her and Malfoy share the small space, and Draco tries to avoid insanity as he becomes increasingly isolated with only the Mudblood for company. Something's going to give...