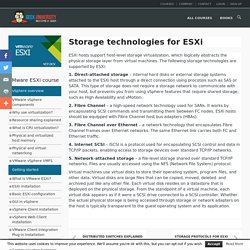 The following storage technologies are supported by ESXi: 1. Direct-attached storage – internal hard disks or external storage systems attached to the ESXi host through a direct connection using procotols such as SAS or SATA. This type of storage does not require a storage network to communicate with your host, but prevents you from using vSphere features that require shared storage, such as High Availability and vMotion. 2. 3. 4. 5.

Virtual machines use virtual disks to store their operating system, program files, and other data. Vsphere esxi vcenter server 60 storage guide. VMware To Complete Storage Virtualization With VVols. VMware launched its Virtual SAN (VSAN) hyperconverged storage for its vSphere virtualized servers last fall and started shipping it this spring and has seen very good uptake of the technology, with 12,000 beta tests through the spring and more than 300 customers in production in the first three months of commercial availability. 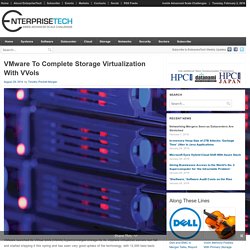 But that is not the end of the virtual storage story at VMware. The next release of the hypervisor will include a feature called Virtual Volumes, or VVols for short, and this type of storage virtualization will be employed across all kinds of devices to virtualize the data plane between virtual machines and physical storage devices. In a way, VSAN offers a kind of preview of the VVols technology. VMware launches virtual SAN software. VMware has introduced software designed to make it much easier for its customers to store large numbers of virtual machines (VMs) created with the company’s software. 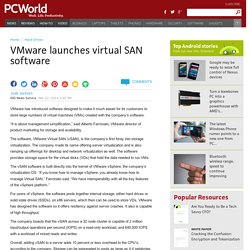 “It is about management simplification,” said Alberto Farronato, VMware director of product marketing for storage and availability. The software, VMware Virtual SAN (vSAN), is the company’s first foray into storage virtualization. The company made its name offering server virtualization and is also ramping up offerings for desktop and network virtualization as well. The software provides storage space for the virtual disks (VDs) that hold the data needed to run VMs. The vSAN software is built directly into the kernel of VMware vSphere, the company’s virtualization OS. For users of vSphere, the software pools together internal storage, either hard drives or solid state drives (SSDs), on x86 servers, which then can be used to store VDs. Review: VMware Virtual SAN turns storage inside-out.

Convergence of compute and storage is all the rage in the virtualization market these days. 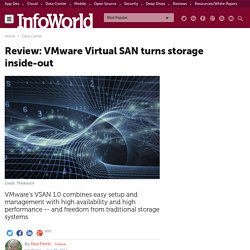 You see it in Microsoft's Windows Server 2012 R2 with Hyper-V and Storage Spaces. You see it in third-party platforms such as Nutanix. And you see it in VMware's vSphere flagship with the addition of Virtual SAN, a new capability built into the ESXi hypervisor that turns the direct-attached storage in vSphere cluster nodes into highly available, high-performance shared storage. The goals behind Virtual SAN, or VSAN, are both to lower overall storage costs and to eliminate the I/O latencies associated with networked storage. 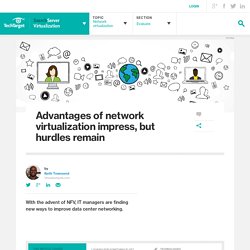 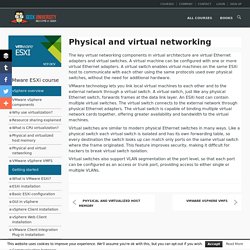 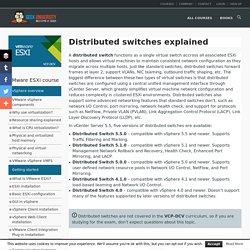 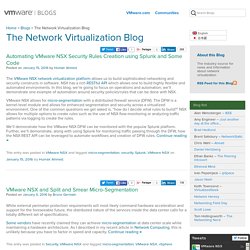 NSX has a rich RESTful API which allows one to build highly flexible and automated environments. In this blog, we’re going to focus on operations and automation; we’ll demonstrate one example of automation around security policies/rules that can be done with NSX. VMware NSX allows for micro-segmentation with a distributed firewall service (DFW). The DFW is a kernel-level module and allows for enhanced segmentation and security across a virtualized environment.

One of the common questions we get asked is, “how do I decide what rules to build?” We’ll demonstrate how the VMware NSX DFW can be monitored with the popular Splunk platform. Some vendors have recently claimed they can achieve micro-segmentation at data center scale while maintaining a hardware architecture. Network security, for a long time, has worked off of the old Russian maxim, “trust but verify.” Network Virtualization vs. Server Virtualization. How is network virtualization similar to server virtualization? 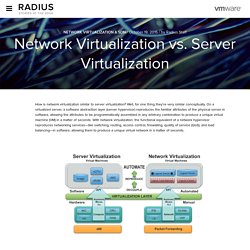 Well, for one thing they’re very similar conceptually. Virtual Networking 101: Understanding VMware Networking. May 30, 2012By Petra Jorgenson On a basic, structural level, virtual networks in VMware aren’t that different from physical networks; vSphere is designed to mimic the functions of a physical network, so a lot of the network hardware you’ll find in the real world, you’ll find virtualized in VMware.

If you understand how physical networks operate, then understanding virtual networking shouldn’t be too difficult. Virtual networking concepts. What is VMware NSX? - Definition from WhatIs.com. VMware NSX is a virtual networking and security software product family created from VMware's vCloud Networking and Security (vCNS) and Nicira Network Virtualization Platform (NVP) intellectual property. By submitting your email address, you agree to receive emails regarding relevant topic offers from TechTarget and its partners. You can withdraw your consent at any time. Contact TechTarget at 275 Grove Street, Newton, MA. You also agree that your personal information may be transferred and processed in the United States, and that you have read and agree to the Terms of Use and the Privacy Policy.

The Virtues of Network Virtualization. Security. IT automation. Application continuity. What do these three things have in common? VMware NSX: 3 different use cases. Network virtualization continues to play a key role on the journey to the data center of the future. As concepts such as the software-defined data center (SDDC) and hyperconvergence take hold, they are driven, in part, by network virtualization technology. While there is a growing throng of network virtualization providers, VMware's NSX continually stands out as one of the most popular options. At the 2015 VMworld conference, the company announced that it had more than 700 NSX customers, with a few of them spending more than $1 million a piece on the product.