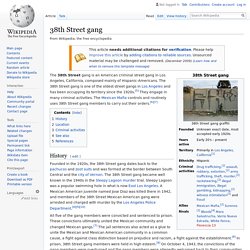 The 38th Street gang is one of the oldest street gangs in Los Angeles and has been occupying its territory since the 1920s.[5] They engage in many criminal activities. The Mexican Mafia controls and routinely uses 38th Street gang members to carry out their orders.[6][7] History[edit] All five of the gang members were convicted and sentenced to prison. Two members of the 38th Street Gang, circa 1993. Winter Hill Gang - Wikipedia. The Winter Hill Gang was given its name in the 1970s by journalists at the Boston Herald, although the name was hardly ever openly used as a reference to them. 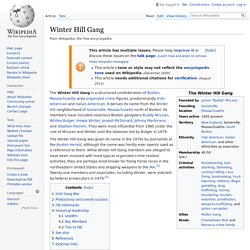 While Winter Hill Gang members are alleged to have been involved with most typical organized-crime-related activities, they are perhaps most known for fixing horse races in the northeastern United States and shipping weapons to the IRA.[1] Twenty-one members and associates, including Winter, were indicted by federal prosecutors in 1979.[2] Irish Gang War[edit] The Boston Irish Gang War started in 1961 and lasted until 1967. Mexico Under Siege. Since June 2008, Times reporters and photographers have chronicled, from both sides of the border, the savage struggle among Mexican drug cartels for control over the lucrative drug trade to the U.S. 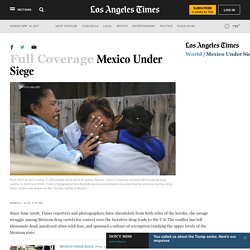 The conflict has left thousands dead, paralyzed cities with fear, and spawned a culture of corruption reaching the upper levels of the Mexican state. Since June 2008, Los Angeles Times reporters and photographers have chronicled, from both sides of the border, the savage struggle among Mexican drug cartels for control over the lucrative drug trade to the U.S.

Mexican Saints. El Andar: Winter 2003. “There is a crime here that goes beyond denunciation. 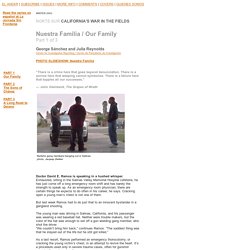 There is a sorrow here that weeping cannot symbolize. There is a failure here that topples all our successes. . ” — John Steinbeck, The Grapes of Wrath Doctor David E. Luis Resto (boxer) - Wikipedia. An encyclopedia of crime. Home - AlcatrazHistory.com. Mitchell brothers - Wikipedia. Brothers James Lloyd "Jim" Mitchell (November 30, 1943, in Stockton, California – July 12, 2007, in Petaluma, California) and Artie Jay Mitchell (December 17, 1945, in Lodi, California – February 27, 1991, in Marin County, California) were pioneers in the pornography and striptease club business in San Francisco and other parts of California from 1969 until 1991, when Jim was convicted of killing Artie. 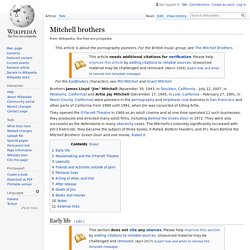 Early life[edit] The Mitchells' father, Robert (known to all as Bob), an "Okie", was a professional gambler. He and his wife, Georgia Mae, settled in Antioch, California near San Francisco, and according to the Mitchell brothers' biographers, provided a relatively stable childhood for Jim and Artie; the boys were popular and their childhood friends would become important members of the Mitchells' porn empire. Moviemaking and the O'Farrell Theatre[edit] The Mitchells opened the O'Farrell Theatre on the July 4, 1969, and were confronted almost immediately by the authorities. George Jung - Wikipedia. Biography[edit] Early life[edit] In 1967, after meeting with a childhood friend, Jung realized the enormous profit potential represented by smuggling the cannabis he bought in California back to New England.[3] Jung initially had his stewardess girlfriend transport the drugs in her suitcases on flights.[3] In search of even greater profits, he expanded his operation to flying the drugs in from Puerto Vallarta, Mexico,[3] using airplanes stolen from private airports on Cape Cod[4] and professional pilots.[5] At the height of this enterprise, Jung and his associates were reportedly making $250,000 a month (equivalent to over $1.5 million in 2016 dollars, adjusting for inflation).[3] This ended in 1974, when Jung was arrested in Chicago for smuggling 660 pounds (300 kg) of marijuana. 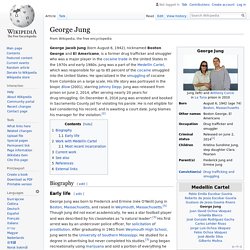 He had been staying at the Playboy Club, where he was to meet a connection who would pick up the marijuana. Work with Medellín Cartel[edit] Wonderland Gang - Wikipedia. The Wonderland Gang was a group of drug dealers involved in the Los Angeles cocaine trade during the late 1970s and early 1980s; their home base was located on Wonderland Avenue in the Laurel Canyon section of Los Angeles, California.[1] On July 1, 1981, three members and one associate of the gang died in the Wonderland murders (also known as the "Four on the Floor murders" or the "Laurel Canyon murders"). 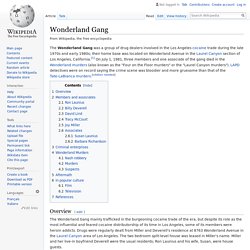 LAPD detectives were on record saying the crime scene was bloodier and more gruesome than that of the Tate-LaBianca murders. [citation needed] Overview[edit] The Wonderland Gang mainly trafficked in the burgeoning cocaine trade of the era, but despite its role as the most influential and feared cocaine distributorship of its time in Los Angeles, some of its members were heroin addicts. Drugs were regularly dealt from Miller and Deverell's residence at 8763 Wonderland Avenue in the Laurel Canyon area of Los Angeles. 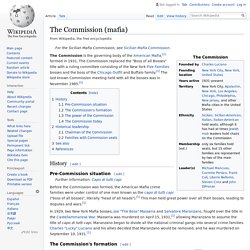 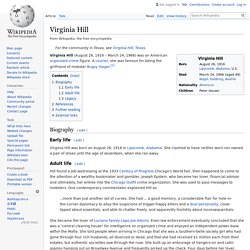 A courier, she was famous for being the girlfriend of mobster Bugsy Siegel.[1] Biography[edit] Early life[edit] Virginia Hill was born on August 26, 1916 in Lipscomb, Alabama. Barbara Daly Baekeland - Wikipedia. Barbara Daly Baekeland (1922 – November 17, 1972) was a wealthy American socialite who was murdered by her son, Antony "Tony" Baekeland.[1] She was the ex-wife of Brooks Baekeland, who was the grandson of Leo Baekeland, inventor of Bakelite plastic. 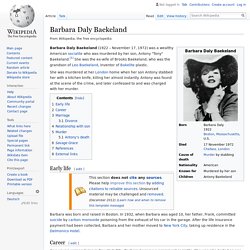 She was murdered at her London home when her son Antony stabbed her with a kitchen knife, killing her almost instantly. Antony was found at the scene of the crime, and later confessed to and was charged with her murder. Early life[edit] Barbara was born and raised in Boston. In 1932, when Barbara was aged 10, her father, Frank, committed suicide by carbon monoxide poisoning from the exhaust of his car in the garage.

Mexican Drug War - Wikipedia. Although Mexican drug cartels, or drug trafficking organizations, have existed for several decades, their influence has increased[91][92] since the demise of the Colombian Cali and Medellín cartels in the 1990s. Mexican drug cartels now dominate the wholesale illicit drug market and in 2007 controlled 90% of the cocaine entering the United States.[93][94] Arrests of key cartel leaders, particularly in the Tijuana and Gulf cartels, has led to increasing drug violence as cartels fight for control of the trafficking routes into the United States.[95][96][97] Analysts estimate that wholesale earnings from illicit drug sales range from $13.6 to $49.4 billion annually.[93][98][99] By the end of Felipe Calderón's administration (December 1, 2006 – November 30, 2012), the official death toll of the Mexican Drug War was at least 60,000.[100] Estimates set the death toll above 120,000 killed by 2013, not including 27,000 missing.[101][102]

Leopold and Loeb - Wikipedia. Nathan Freudenthal Leopold Jr. (November 19, 1904 – August 29, 1971)[1] and Richard Albert Loeb (/ˈloʊb/; June 11, 1905 – January 28, 1936), usually referred to collectively as Leopold and Loeb, were two wealthy students at the University of Chicago who in May 1924 kidnapped and murdered 14-year-old Robert Franks in Chicago. They committed the murder—widely characterized at the time as "the crime of the century"[2]—as a demonstration of their perceived intellectual superiority, which, they thought, rendered them capable of carrying out a "perfect crime", and absolved them of responsibility for their actions.

The narcosphere. Gulf Cartel - Wikipedia. The Gulf Cartel (Spanish: Cártel del Golfo, Golfos, or CDG)[3][4] is a criminal syndicate and drug trafficking organization in Mexico,[5] and perhaps one of the oldest organized crime groups in the country.[6] It is currently based in Matamoros, Tamaulipas, directly across the border from Brownsville, Texas. Their network is international, and are believed to have dealings with crime groups in Europe, West Africa, Asia, Central America, South America, and the United States.[7][8] Besides drug trafficking, the Gulf Cartel operates through protection rackets, assassinations, extortions, kidnappings, and other criminal activities.[9] The members of the Gulf Cartel are known for intimidating the population and for being particularly violent.[10] As of December 2016 Los Zetas Group (Groupo Bravo & Zetas Vieja Escuela (Old School Zetas) made an Alliance with the Gulf cartel to fight against Cartel Del Noroeste (Cartel of the Northeast).

History[edit] Juárez Cartel - Wikipedia. The Juárez Cartel was the dominant player in the center of the country, controlling a large percentage of the cocaine traffic from Mexico into the United States. The death of Amado Carrillo Fuentes in 1997 was the beginning of the decline of the Juárez cartel, as Carrillo relied on ties to Mexico's top-ranking drug interdiction officer, division general Jesús Gutiérrez Rebollo.[6][7] History[edit] Tijuana Cartel - Wikipedia. The Tijuana Cartel (Spanish: Cártel de Tijuana) or Arellano-Félix Organization (Spanish: Cártel Arellano Félix - CAF) is a Mexican drug cartel based in Tijuana. The cartel once was described as "one of the biggest and most violent criminal groups in Mexico. La Familia Michoacana - Wikipedia. Los Zetas - Wikipedia. Beltrán-Leyva Cartel - Wikipedia. Mexico’s Drug War. Gang War II- Back in the Hood. Glasgow smile - Wikipedia. Charles Bowden - Wikipedia. Columbine High School massacre - Wikipedia.

Where All Neighborhoods Get Along. Heriberto Lazcano Lazcano - Wikipedia. COLUMN ONE : Film Leaves a Legacy of Fear : For more than a year, 'American Me' has haunted its maker, actor Edward James Olmos. He worries that the Mexican Mafia may seek vengeance against him because of his harsh anti-gang tale. - latimes. El original Blog del Narco - ElBlogdelnarco.com. Club Kids - Wikipedia. Murder of Cassie Jo Stoddart - Wikipedia. Abuses at infamous Florida boys reform school even more widespread, report says - U.S. News. Billionaire Boys Club - Wikipedia. Reportero. Gregory Scarpa - Wikipedia. Gangrule - The History of the Mafia. Murder by Gaslight.