Tofugu — A Japanese Culture & Language Blog. The Garden of the Phoenix. 51JapaneseCharacters. Japanese for the Western Brain. *** Notice *** If you would like to give money to support relief efforts in Japan, it is possible to donate directly to the Japanese Red Cross Society. 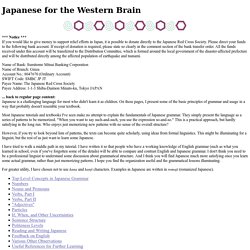 Please direct your funds to the following bank account. If receipt of donation is required, please state so clearly in the comment section of the bank transfer order. All the funds received under this account will be transferred to the Distribution Committee, which is formed around the local government of the disaster-affected prefecture and will be distributed directly among the affected population of earthquake and tsunami. Name of Bank: Sumitomo Mitsui Banking Corporation Name of Branch: Ginza Account No.: 8047670 (Ordinary Account) SWIFT Code: SMBC JP JT Payee Name: The Japanese Red Cross Society Payee Address: 1-1-3 Shiba-Daimon Minato-ku, Tokyo JAPAN ... back to regular page content:Japanese is a challenging language for most who didn't learn it as children. I have tried to walk a middle path in my tutorial. The Samurai Archives Japanese History Page.

Tofugu — A Japanese Culture & Language Blog. Etiquette in Japan - Wikipedia. The code of etiquette in Japan governs the expectations of social behavior in the country and is considered very important. 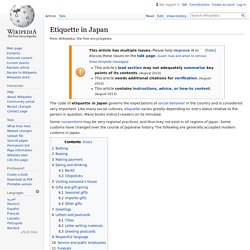 Like many social cultures, etiquette varies greatly depending on one's status relative to the person in question. Many books instruct readers on its minutiae. Bathing[edit] Bathing is an important part of the daily routine in Japan. Baths are for relaxing, and the body must be cleaned and scrubbed before entering the bathtub or furo. In homes with small tubs, family members bathe one by one, in order of seniority, traditionally starting with the oldest male or the oldest person in the household (grandmother may bathe before the father of the house). Bathtubs are increasingly common in modern Japanese homes, but there are still many small and old apartments in cities that do not have bathtubs, so public bathhouses called sentō are common. 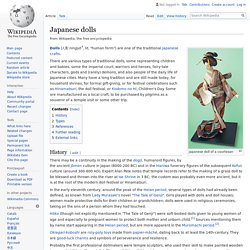 , lit. "human form") are one of the traditional Japanese crafts. There are various types of traditional dolls, some representing children and babies, some the imperial court, warriors and heroes, fairy-tale characters, gods and (rarely) demons, and also people of the daily life of Japanese cities. Many have a long tradition and are still made today, for household shrines, for formal gift-giving, or for festival celebrations such as Hinamatsuri, the doll festival, or Kodomo no Hi, Children's Day. History[edit] There may be a continuity in the making of the dogū, humanoid figures, by the ancient Jōmon culture in Japan (8000-200 BC) and in the Haniwa funerary figures of the subsequent Kofun culture (around 300-600 AD).

In the early eleventh century, around the peak of the Heian period, several types of dolls had already been defined, as known from Lady Murasaki's novel "The Tale of Genji". Types[edit] References[edit] Hinamatsuri - Wikipedia. "Girls Day" redirects here. 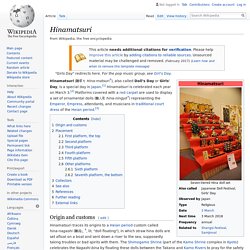 For the pop music group, see Girl's Day. Hinamatsuri (雛祭り, Hina-matsuri?) , also called Doll's Day or Girls' Day, is a special day in Japan.[1] Hinamatsuri is celebrated each year on March 3.[2] Platforms covered with a red carpet are used to display a set of ornamental dolls (雛人形, hina-ningyō?) Representing the Emperor, Empress, attendants, and musicians in traditional court dress of the Heian period.[3]