Gullah - Wikipedia. Because of a period of relative isolation in rural areas, the Gullah developed a culture that has preserved much of the African linguistic and cultural heritage from various peoples, as well as absorbed new influences from the region. 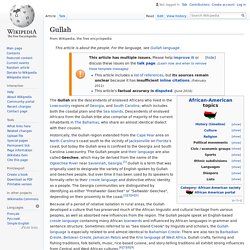 The Gullah people speak an English-based creole language containing many African loanwords and influenced by African languages in grammar and sentence structure. Sometimes referred to as "Sea Island Creole" by linguists and scholars, the Gullah language is especially related to and almost identical to Bahamian Creole. There are also ties to Barbadian Creole, Belizean Creole, Jamaican Patois and the Krio language of West Africa. Gullah crafts, farming and fishing traditions, folk beliefs, music, rice-based cuisine, and story-telling traditions all exhibit strong influences from Central and West African cultures.[6][7][8][9] History[edit] The Obama Years - A Nine-Part Oral History.

Home - Jewish Warsaw. A museum that seeks to understand American history through the lens of the African American experience. Circus Freaks and Human Oddities- The Human Marvels. Alcatraz Island (U.S. National Park Service) 50 Incredible, Historical Speeches You Should Watch Online. You hope that your professors will be good speakers who can keep your interest for at least the length of a class period, but more often than not, you’ll have a teacher or two each semester who drones on and on and doesn’t make you feel passionate about the subject. 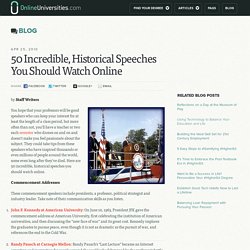 They could take tips from these speakers who have inspired thousands or even millions of people around the world, some even long after they’ve died. Here are 50 incredible, historical speeches you should watch online. Commencement Addresses. A Class Divided. The History Place. Medieval Castle History, Design of Medieval Castles, Haunted Castles: www.medieval-castle.com. Www.timeref.org. Bruce Lee. Lee Jun-fan (Chinese: 李振藩; November 27, 1940 – July 20, 1973), known professionally as Bruce Lee, was a Hong Kong and American martial artist, actor, philosopher, filmmaker,[4] and founder of the martial art Jeet Kune Do. 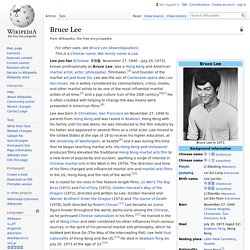 Lee was the son of Cantonese opera star Lee Hoi-chuen. He is widely considered by commentators, critics, media, and other martial artists to be one of the most influential martial artists of all time,[5] and a pop culture icon of the 20th century.[6][7] He is often credited with helping to change the way Asians were presented in American films.[8] Lee was born in Chinatown, San Francisco on November 27, 1940 to parents from Hong Kong and was raised in Kowloon, Hong Kong with his family until his late teens. He was introduced to the film industry by his father and appeared in several films as a child actor.

EyeWitness to History - history through the eyes of those who lived it. American Museum of Natural History. Man in the Iron Mask - Wikipedia. The Man in the Iron Mask (French: L'Homme au Masque de Fer; c. 1640 – 19 November 1703) is the name given to an unidentified prisoner who was arrested in 1669 or 1670 and subsequently held in a number of French prisons, including the Bastille and the Fortress of Pignerol (modern Pinerolo, Italy). 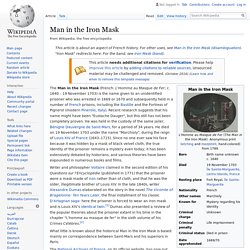 Recent research suggests that his name might have been "Eustache Dauger", but this still has not been completely proven. He was held in the custody of the same jailer, Bénigne Dauvergne de Saint-Mars, for a period of 34 years. He died on 19 November 1703 under the name "Marchioly", during the reign of Louis XIV of France (1643–1715). Original photographs from the Civil War. Elizabeth I of England - Wikipedia. Elizabeth I (7 September 1533 – 24 March 1603)[1] was Queen of England and Ireland from 17 November 1558 until her death. 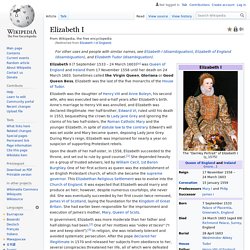 Sometimes called The Virgin Queen, Gloriana or Good Queen Bess, the childless Elizabeth was the last monarch of the Tudor dynasty. Elizabeth was the daughter of Henry VIII and Anne Boleyn, his second wife, who was executed two and a half years after Elizabeth's birth. Anne's marriage to Henry VIII was annulled, and Elizabeth was declared illegitimate. Her half-brother, Edward VI, ruled until his death in 1553, bequeathing the crown to Lady Jane Grey and ignoring the claims of his two half-sisters, Elizabeth and the Roman Catholic Mary, in spite of statute law to the contrary. Edward's will was set aside and Mary became queen, deposing Lady Jane Grey. Elizabeth (film) - Wikipedia. The film brought Australian actress Blanchett to international attention. 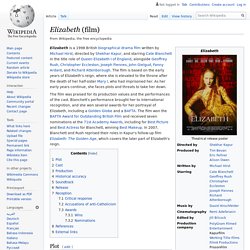 She won several awards for her portrayal of Elizabeth, notably a BAFTA and a Golden Globe in 1998. The film was named the 1998 BAFTA Award for Best British Film and was nominated for seven awards at the 71st Academy Awards, including Best Picture and Best Actress, winning Best Makeup. Elizabeth: The Golden Age - Wikipedia. The film premiered on 9 September 2007 at the Toronto International Film Festival. 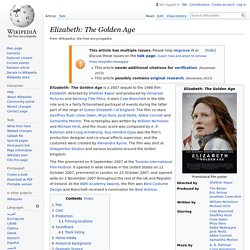 It opened in wide release in the United States on 12 October 2007, premiered in London on 23 October 2007, and opened wide on 2 November 2007 throughout the rest of the UK and Republic of Ireland. At the 80th Academy Awards, the film won Best Costume Design and Blanchett received a nomination for Best Actress. Plot[edit] Children of the Camps: the Japanese American WWII internment camp experience. The Children of the Camps documentary captures the experiences of six Americans of Japanese ancestry who were confined as innocent children to internment camps by the U.S. government during World War II. 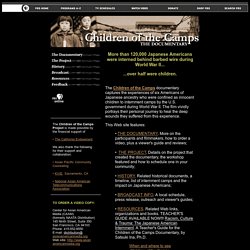 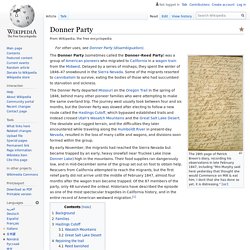 Murphy said here yesterday that she thought she would commence on Milton and eat him. I do not think she has done so yet; it is distressing. "[1] Weather Underground. With revolutionary positions characterized by black power and opposition to the Vietnam War,[2] the group conducted a campaign of bombings through the mid-1970s and took part in actions such as the jailbreak of Dr. 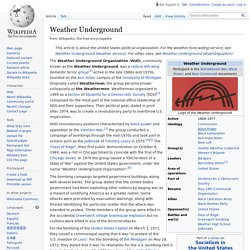 Timothy Leary. The "Days of Rage", their first public demonstration on October 8, 1969, was a riot in Chicago timed to coincide with the trial of the Chicago Seven. American Indian Movement - Wikipedia. The American Indian Movement (AIM) is an American Indian advocacy group in the United States, founded in July 1968 in Minneapolis, Minnesota.[1] AIM was initially formed to address American Indian sovereignty, treaty issues, spirituality, and leadership, while simultaneously addressing incidents of police harassment and racism against Native Americans forced to move away from reservations and tribal culture by the 1950s-era enforcement of the U.S. federal government-enforced Indian Termination Policies originally created in the 1930s.

The original founders of AIM included Dennis Banks, George Mitchell, George Mellessey, Herb Powless, Clyde Bellecourt, Vernon Bellecourt, Harold Goodsky, Eddie Benton-Banai, and a number of others in the Minneapolis Native American community.[6] Russell Means, born Oglala Lakota, was an early leader in 1970s protests. Background[edit] 1960s[edit] Symbionese Liberation Army. The United Federated Forces of the Symbionese Liberation Army (SLA) was an American self-styled left-wing revolutionary organization active between 1973 and 1975 that considered itself a vanguard army. The group committed bank robberies, two murders, and other acts of violence. The SLA became internationally notorious for the kidnapping of heiress Patty Hearst, abducting the 19-year-old from Berkeley, California. Interest increased when Hearst, in audiotaped messages delivered to (and broadcast by) regional news media, announced that she had joined the SLA. Hearst later said that members of the terrorist group threatened to kill her, held her in close confinement, and sexually assaulted and brainwashed her.

Brown Berets - Wikipedia. For the Belgian military formation known as the "Brown Berets", see Belgian United Nations Command Predecessors[edit] Actions[edit] By September 1968, the Brown Berets became a national organization having opened chapters California, Arizona, Texas, Colorado, New Mexico, Milwaukee, Chicago, Detroit, Minnesota, Ohio, Oregon, and Indiana.[6] In 1969, Brown Berets Cristo Cebada produced and distributed a newspaper called "La Causa. Black Panther Party - Wikipedia. The Black Panther Party or the BPP (originally the Black Panther Party for Self-Defense) was a revolutionary black nationalist and socialist organization[1][2] active in the United States from 1966 until 1982, with international chapters operating in the United Kingdom in the early 1970s,[3] and in Algeria from 1969 until 1972.[4] At its inception on October 15,[5] 1966, the Black Panther Party's core practice was its armed citizens' patrols to monitor the behavior of officers of the Oakland Police Department and challenge police brutality in Oakland, California.

Federal Bureau of Investigation Director J. Government oppression initially contributed to the party's growth, as killings and arrests of Panthers increased its support among African Americans and on the broad political left, both of whom valued the Panthers as a powerful force opposed to de facto segregation and the military draft. Marie Antoinette. Archive - Survivors of the Titanic - Survivors from the famous shipwreck tell their stories. Premier Exhibitions. RMS Titanic, Inc, a subsidiary of Premier Exhibitions, Inc. serves as the exclusive steward of RMS Titanic which tragically sank on April 15, 1912. The Company is dedicated to preserving the legacy of the Ship, wreck site and all her passengers and crew through educational , historical, scientific and conservation based programs. Since 1987, RMS Titanic, Inc. has honorably conducted eight research expeditions to the wreck of Titanic exclusively recovering and conserving more than 5,500 artifacts.