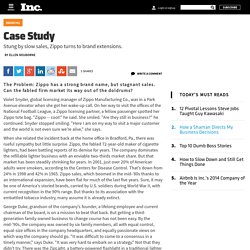 Can the fabled firm market its way out of the doldrums? Violet Snyder, global licensing manager of Zippo Manufacturing Co., was in a Park Avenue elevator when she got her wake-up call. On her way to visit the offices of the National Football League, a Zippo licensing partner, a fellow passenger spotted her Zippo tote bag. "Zippo -- cool! " he said. When she related the incident back at the home office in Bradford, Pa., there was rueful sympathy but little surprise. George Duke, grandson of the company's founder, a lifelong employee and current chairman of the board, is on a mission to beat that back. No one was more frustrated than Duke, who was convinced that Zippo had to change -- and fast.

The Decision In 2001, Zippo officially abandoned the strategic mindset of a one-product manufacturing business and entered the 21st century world of brand management. Finally, Zippo is hard at work addressing its aging boomer problem. Brand Profile. When George Blaisdell invented the Zippo lighter in 1932 in an effort to craft a more streamlined functional American lighter than its Austrian counterpart, smoking was widely accepted. 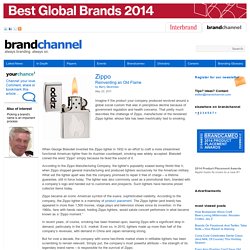 Blaisdell coined the word “Zippo” simply because he liked the sound of it. According to the Zippo Manufacturing Company, the lighter’s popularity soared during World War II, when Zippo stopped general manufacturing and produced lighters exclusively for the American military. What set the lighter apart was that the company promised to repair it free of charge – a lifetime guarantee, still in force today. The lighter was also commonly used as a promotional item, branded with a company’s logo and handed out to customers and prospects. Such lighters have become prized collector items today. 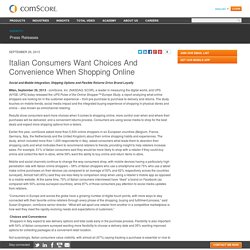 (NASDAQ: SCOR), a leader in measuring the digital world, and UPS (NYSE: UPS) today released the UPS Pulse of the Online Shopper™ Europe Study, a report analyzing what online shoppers are looking for in the customer experience – from pre-purchase to purchase to delivery and returns. The study touches on mobile trends, social media impact and the integrated buying experience of shopping in physical stores and online – also known as omnichannel retailing.

Results show consumers want more choices when it comes to shopping online, more control over when and where their purchases will be delivered, and a convenient returns process. Choices and Convenience Shoppers in Italy expect to see delivery options and total costs early in the purchase process. About comScore comScore, Inc. Market Research Italy. How Nike is Killing It In Social Media Marketing. One of the biggest social media marketing companies out there right now isn't Google or Instagram or Pinterest. 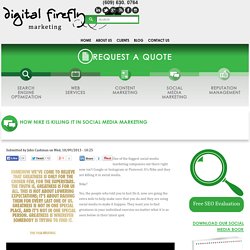 It's Nike and they are killing it in social media. Nike? Yes, the people who told you to Just Do it, now are going the extra mile to help make sure that you do and they are using social media to make it happen. They want you to find greatness in your individual exercise no matter what it is as seen below in their latest spot. However, first things first, It's important to understand Nike as a brand. In order to accomplish that goal, Nike has made a conscious decision to move away from traditional advertising and focus on digital marketing with a big investment in social media including Twitter and Facebook, and it's own social network Nike+(plus).

To that end Nike has introduced Nike+. The first gadget that was introduced early in 2012 and will likely be on the wrist of many an athletes at the London Olympics is the Nike Fuel Band. Nike Risks Everything in New Campaign. Nike Engages the World, Locally Users in more than a dozen different regions as diverse as Indonesia, Italy, Hong Kong and Columbia all had the same favorite post last month: A smirking Christiano Ronaldo, frozen into hi-fi surreality, captioned with texts tailored for each area. 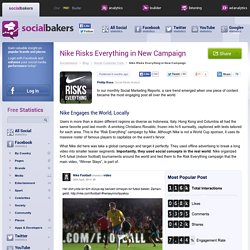 This is the “Risk Everything” campaign by Nike. Although Nike is not a World Cup sponsor, it uses its massive roster of famous players to capitalize on the event’s fervor. What Nike did here was take a global campaign and target it perfectly. They used offline advertising to break a long video into smaller teaser segments. “Every four years the world waits to see something incredible in football. This post, the most engaging in Turkey last month according to our latest Social Marketing Report, is different from some other regions' “Winner Stays” posts. This kind of attention to local detail is a large factor in the campaign's global success. Socially Enabled Success. What Jim Carrey Explains In 1 Minute Will Change Your Life Forever. Seriously. 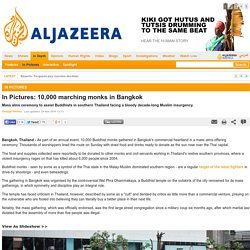 Ten thousand monks joined in Buddhist chants for the first hour before walking among followers who gave them food and drinks. The monks are members of Wat Phra Dhammakaya, a UFO shaped temple on the outskirts of Bangkok. A monk in deep contemplation sits near the front of the large group. Lines of monks walk between their followers who are dressed in white as a symbol of their faith. Featured on Al Jazeera.