Gibson Custom ES-339. The Best of Both Worlds, For Today’s Demanding Player The ES-339 From Gibson Memphis Through the course of more than five decades and myriad shifting musical styles, the ES-335 has remained one of the most popular electric guitars of all time. 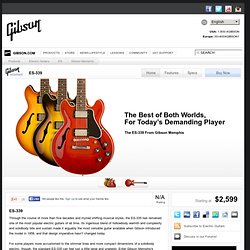 Its ingenious blend of hollowbody warmth and complexity and solidbody bite and sustain made it arguably the most versatile guitar available when Gibson introduced the model in 1958, and that design imperative hasn’t changed today. For some players more accustomed to the slimmer lines and more compact dimensions of a solidbody electric, though, the standard ES-335 can feel just a little large and unwieldy. Gibson ES-339 from Gibson Custom Shop. Gibson ES-339: Classic semi-hollow sound from a solidbody-size guitar. 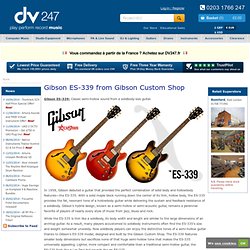 In 1958, Gibson debuted a guitar that provided the perfect combination of solid body and hollowbody features—the ES-335. With a solid maple block running down the center of its thin, hollow body, the ES-335 provides the fat, resonant tone of a hollowbody guitar while delivering the sustain and feedback resistance of a solidbody. Gibson’s hybrid design, known as a semi-hollow or semi-acoustic guitar, remains a perennial favorite of players of nearly every style of music from jazz, blues and rock.

While the ES-335 is thin like a solidbody, its body width and length are similar to the large dimensions of an archtop guitar. As a result, many players accustomed to solidbody instruments often find the ES-335’s size and weight somewhat unwieldy. Despite its smaller body dimensions, the ES-339 does not look like an awkward smaller version of a 335. The Gibson Custom Shop have created another winner. Gibson Billie Joe Armstrong Les Paul Junior. 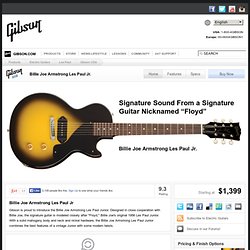 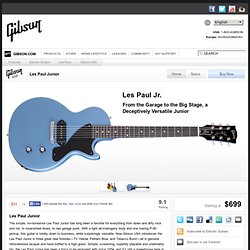 With a light all-mahogany body and one roaring P-90 pickup, this guitar is totally down to business, while surprisingly versatile. Now Gibson USA introduces the Les Paul Junior in three great new finishes—TV Yellow, Pelham Blue, and Tobacco Burst—all in genuine nitrocellulose lacquer and hand buffed to a high gloss. Simple, screaming, superbly playable and undeniably hip, the Les Paul Junior has been a force to be reckoned with since 1954, and it’s still a powerhouse here in the 21st century.

Just like the first Junior to roll off the line in Kalamazoo 57 years ago, the Les Paul Junior from Gibson USA is made from choice solid mahogany. An archetypal tonewood used in countless classic Gibson electric guitars, mahogany has a sonic depth and richness that can’t be beat, yet always remains clear and articulate. VAN HALEN TIME!! 1959 LES PAUL JUNIOR 01318. 1962 Gibson Les Paul SG Standard 01131.

1959 Gibson ES-335 TD 00884. Gibson ES339 With Jeff Pevar. Derek Trucks Signature SG. Over the past two decades, Derek Trucks has risen from child prodigy to being one of the most accomplished and respected guitarists working today. 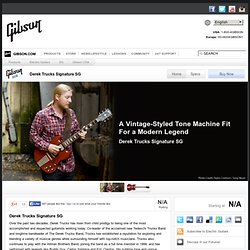 Co-leader of the acclaimed new Tedeschi Trucks Band and longtime bandleader of The Derek Trucks Band, Trucks has established a reputation for exploring and blending a variety of musical genres while surrounding himself with top-notch musicians. Trucks also continues to play with the Allman Brothers Band, joining the band as a full time member in 1999, and has performed with legends like Buddy Guy, Carlos Santana and Eric Clapton. His sublime tone and unique playing style—both of which benefit from liberal slide playing—are entirely unforgettable once you have experienced them, and his weapon of choice is a Gibson SG Standard. To celebrate the achievements of this original and dynamic artist, Gibson USA presents the Derek Trucks Signature SG. Gibson SG Standard - Blues Rock - How does it sound ?