The 2016 Nissan Rogue from Dealers around Fort Bliss: Powerful and Sleek. Whether you are looking for a ride that’s powerful for off-road adventures or one that’s reliable enough to get the kids to school in a safe manner, the 2016 Nissan Rogue goes above and beyond to provide thrilling and fuel efficient adventures. 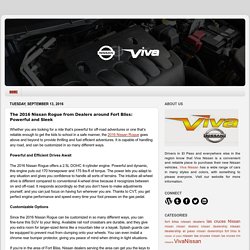 It is capable of handling any road, and can be customized in so many different ways.Powerful and Efficient Drives Await The 2016 Nissan Rogue offers a 2.5L DOHC 4-cylinder engine. Powerful and dynamic, this engine puts out 170 horsepower and 175 lbs-ft of torque. The power lets you adapt to any situation and gives you confidence to handle all sorts of terrains. The intuitive all-wheel drive is different compared to conventional 4-wheel drive because it recognizes between on and off-road. Customizable Options Since the 2016 Nissan Rogue can be customized in so many different ways, you can fine-tune this SUV to your liking. 2017 Nissan GT-R from Dealerships Near Las Cruces, NM: Anticipating Elegant Power. The 2017 Nissan GT-R Near Las Cruces: Refined Upgrades for Maximum Enjoyment. The 2017 Nissan GT-R is definitely living up to its monicker of Godzilla.

The 2017 Nissan GT-R is definitely living up to its monicker of Godzilla. It’s a monstrous machine that does not skimp on functional features and appealing aesthetics. If you think the previous iterations were already great, wait till you see what’s in store with the 2017 version. – vivanissan

It’s a monstrous machine that does not skimp on functional features and appealing aesthetics. 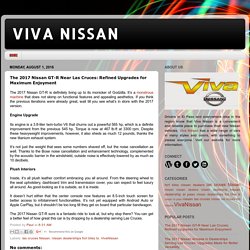 If you think the previous iterations were already great, wait till you see what’s in store with the 2017 version. Engine Upgrade Its engine is a 3.8-liter twin-turbo V6 that churns out a powerful 565 hp, which is a definite improvement from the previous 545 hp. Torque is now at 467 lb-ft at 3300 rpm. It’s not just the weight that sees some numbers shaved off, but the noise cancellation as well. Plush Interiors Inside, it’s all plush leather comfort embracing you all around. It doesn’t hurt either that the center console now features an 8.5-inch touch screen for better access to infotainment functionalities. The 2016 Nissan Rogue from Nissan Dealerships Serving Fort Bliss, TX show Smart SUV Driving. The 2017 Nissan Armada from Dealerships serving Fort Bliss – A Monstrous SUV with Maximum Luxury.

The 2017 Nissan GT-R from Dealers near Las Cruces – Extreme Power with Exceptional Features. The Nissan GT-R is back with a lot more power and amenities than one would expect. 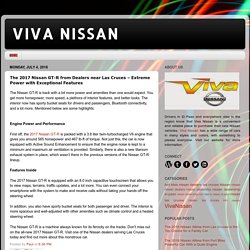 You get more horsepower, more speed, a plethora of interior features, and better looks. The interior now has sporty bucket seats for drivers and passengers, Bluetooth connectivity, and a lot more. Mentioned below are some highlights: Engine Power and Performance First off, the 2017 Nissan GT-R is packed with a 3.8 liter twin-turbocharged V6 engine that gives you around 565 horsepower and 467 lb-ft of torque. Not just this, the car is now equipped with Active Sound Enhancement to ensure that the engine noise is kept to a minimum and maximum air ventilation is provided. Features Inside The 2017 Nissan GT-R is equipped with an 8.0 inch capacitive touchscreen that allows you to view maps, terrains, traffic updates, and a lot more.

In addition, you also have sporty bucket seats for both passenger and driver. 2016 Nissan Altima from Dealerships near Fort Bliss, TX: The Stylish Commuter. The 2016 Nissan Versa from Las Cruces, NM is the Hatchback that Stands Tall. 2016 Nissan Altima from Dealerships Near Fort Bliss: Relish the Excellence and Opulence. By Paul on Once again, Nissan surprises us with its innovation and excellence in engineering, leaving no stone unturned to offer a sedan that feels upscale, is feature-loaded and is high-tech.

Once again, Nissan surprises us with its innovation and excellence in engineering, leaving no stone unturned to offer a sedan that feels upscale, is feature-loaded and is high-tech. The 2016 Nissan Altima comes loaded with multiple amenities to make the ride comfortable, extremely powerful yet fuel efficient engines and a stylish yet functional exterior to add to the glory. – vivanissan 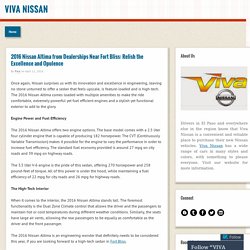 The 2016 Nissan Rogue has got something to prove especially as it dares to enter the seemingly saturated crossover SUV market. Still, there’s always room for one more, all the more when the new market player has competitive features that could give competitors a run for their money. – vivanissan

Still, there’s always room for one more, all the more when the new market player has competitive features that could give competitors a run for their money. 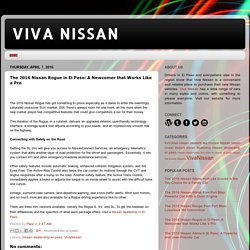 This iteration of the Rogue, in a nutshell, delivers an upgraded exterior, user-friendly technology interface, a storage space that adjusts according to your needs, and an impressively smooth ride on the highway. Connecting with Safety on the Road Getting the SL trim will give you access to NissanConnect Services, an emergency telematics system that adds another layer of road protection for the driver and passengers. Essentially, it lets you contact 911 and other emergency/roadside assistance services. The 2016 Nissan Altima from Fort Bliss: Powerful Car With a Quiet Engine. Nissan Altima has been a lot of things through the years--from a casual family sedan to an entertainingly fast car. 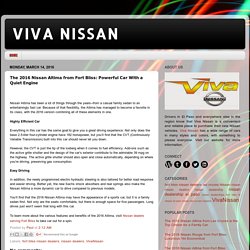 Because of that flexibility, the Altima has managed to become a favorite in its class, with the 2016 version combining all of these elements in one. Highly Efficient Car Everything in this car has the same goal:to give you a great driving experience. Not only does the base 2.5-liter four-cylinder engine have 182 horsepower, but you’ll find that the CVT (Continuously Variable Transmission) built into this car should never let you down. However, the CVT is just the tip of the iceberg when it comes to fuel efficiency. Easy Driving In addition, the newly programmed electro hydraulic steering is also tailored for better road response and easier driving.

The 2016 Nissan Altima 2.5 will rekindle your love for driving and make every trip an exciting one for you. The specially tuned sport suspension will respond to your actions with precision. Taking those corners will thrill you every single time. – vivanissan