Teach Your Kids to Code: 6 Beginner's Resources for Parents. Introducing computer programming to your kids can be a challenge, especially for those who aren’t familiar with the nuances of code. 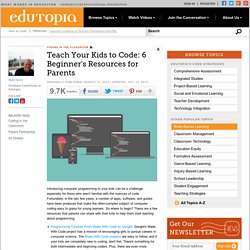 Fortunately, in the last few years, a number of apps, software, and guides have been produced that make the often-complex subject of computer coding easy to grasp for young learners. So where to begin? These are a few resources that parents can share with their kids to help them start learning about programming. Programming Tutorials From Made With Code by Google: Google's Made With Code project has a mission of encouraging girls to pursue careers in computer science. Learn. Moana: Wayfinding with Code Grades 2+ | Blocks Minecraft Hour of Code Make Music with Scratch Grades 2-8 | Blocks, Scratch Gumball's Coding Adventure Grades 6-8 | Blocks, Scratch Vidcode: Code the News Grades 6+ | JavaScript Kodable (pre-readers welcome) Pre-reader - Grade 5 | Blocks | All modern browsers, iPad app Star Wars: Building a Galaxy with Code Grades 2+ | Blocks, JavaScript Adventure on the High Seas. 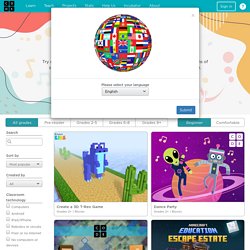 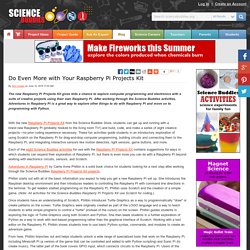 After working through the Science Buddies activities, Adventures in Raspberry Pi is a great way to explore other things to do with Raspberry Pi and move on to programming with Python. With the new Raspberry Pi Projects Kit from the Science Buddies Store, students can get up and running with a brand new Raspberry Pi (probably hooked to the living room TV!) And build, code, and make a series of eight creative projects—no prior coding experience necessary. These fun activities guide students in an introductory exploration of using Scratch on the Raspberry Pi for drag-and-drop computer programming, building circuits and connecting them to the Raspberry Pi, and integrating interactive sensors like motion detectors, light sensors, game buttons, and more. This Throwable Computer Teaches Kids How To Code.

Coding is a great skill for kids to learn but it can be a lonely, sedentary endeavor. 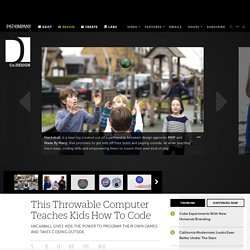 Hackaball, a new toy created from a partnership between the design agencies MAP and Made By Many, promises to get kids off their butts and playing outside—all while teaching basic coding skills and empowering kids to invent their own kind of play. It's a lot to ask from one product which is why Hackaball had to be meticulously designed. The latest ‘kidtech’ kits: tried and tested. Children should have the opportunity to be creators, not just consumers of technology. 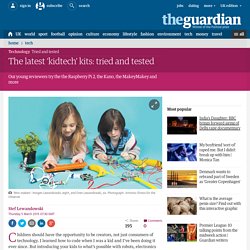 I learned how to code when I was a kid and I’ve been doing it ever since. But introducing your kids to what’s possible with robots, electronics and computers can feel daunting, and I’m someone who has studied computer science! My wife is an author and photographer, and we have four children, aged two, four, six and eight – they call themselves the “mini-makers” because we’re all quite creative. The eldest have started showing an interest in technology, partly because they see me tinkering, but also because learning about technology now has a bigger emphasis in the school curriculum. 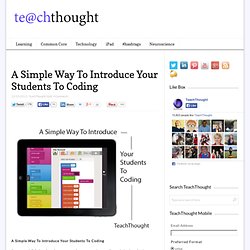 And if the current trend continues, more accessible than ever. While many coding resources for students exist, many of these look like they were designed by lifeless robots. Coding already has a reputation as geeky, dry, and alphanumeric, as opposed to the svelte, elegant, and engaging interaction that code produces. Kind of ironic. HopScotch is an iPad app that introduces students to the concept of coding by using simple graphics, lots of color, and easy to use tools.

Using HopScotch, students can become familiar with the relationship with numbers and letters here, and subsequent movement or animation there. The biggest draw for this app is easily its simplicity. You can see more in the video below. Kodu. The periodic table of tech. You're probably familiar with the periodic table of elements, which adorns the wall of every high-school science classroom. 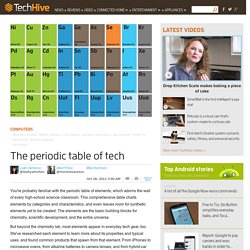 This comprehensive table charts elements by categories and characteristics, and even leaves room for synthetic elements yet to be created. The elements are the basic building blocks for chemistry, scientific development, and the entire universe. But beyond the chemistry lab, most elements appear in everyday tech gear, too. We've researched each element to learn more about its properties and typical uses, and found common products that spawn from that element. From iPhones to microwave ovens, from alkaline batteries to camera lenses, and from hybrid-car fuel cells to plasma HDTVs, everything starts with elements. 1. 3. 4. 5. 6. 7. 8. 9. 10. 11. 12. 13.