Leave Yourself Wanting More. The One Word Key To Happiness. We all want to be happy. 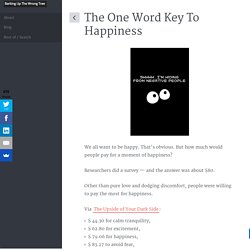 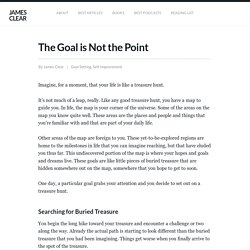 It’s not much of a leap, really. Like any good treasure hunt, you have a map to guide you. In life, the map is your corner of the universe. Four Ways to Make Difficult, Serious Conversations More Productive. Many Senators Don’t Use E-mail. This Shouldn’t Bother You. March 14th, 2015 · Be the first to comment Redeeming The Luddite Caucus Earlier this morning I was reading The Washington Post while watching the sun rise (I have two young kids at home: I find quiet where I can). 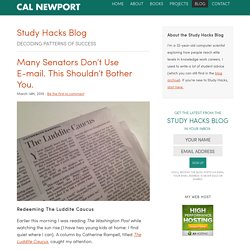 A column by Catherine Rampell, titled The Luddite Caucus, caught my attention. As I began to read, my interest transformed into concern. In the wake of the recent Hillary Clinton e-mail story, many reporters, it turns out, have been asking other politicians about their digital habits. A Religion for the Nonreligious. The mind…can make a heaven of hell, a hell of heaven. ― John Milton. 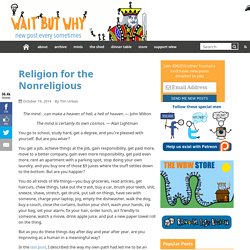 7 Things That Shouldn’t Impress Us Anymore. Why We Act Irrationally: Harvard Psychologist Ellen Langer Reveals the One Word That Drives Our Senseless Habits. It was 1977 and, although nobody knew it at the time, psychologist Ellen Langer and her research team at Harvard University were about to conduct a study that would change our understanding of human behavior. 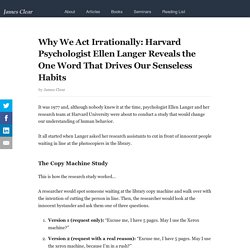 It all started when Langer asked her research assistants to cut in front of innocent people waiting in line at the photocopiers in the library. The Copy Machine Study This is how the research study worked… A researcher would spot someone waiting at the library copy machine and walk over with the intention of cutting the person in line. Your Story Matters More Than You Think. “I now see how owning our story and loving ourselves through that process is the bravest thing that we will ever do.” 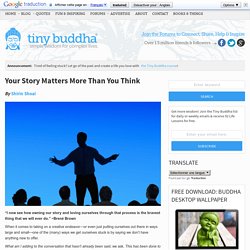 ~Brené Brown When it comes to taking on a creative endeavor—or even just putting ourselves out there in ways large and small—one of the (many) ways we get ourselves stuck is by saying we don’t have anything new to offer. What am I adding to the conversation that hasn’t already been said, we ask. This has been done to death, we worry. An Addict’s Guide to Overcoming the Distraction Habit. By Leo Babauta Yesterday wasn’t a very focused day for me — I got work done, but I also researched a bunch of newish personal interests (mostly programming and cycling), played an iPhone trivia game with my kids, read a bunch of online articles, and did very little of the writing I’d planned. 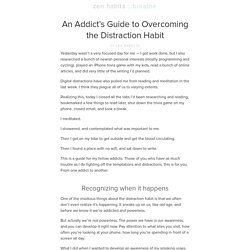 Digital distractions have also pulled me from reading and meditation in the last week. The Top 10 Habits of Grateful People...Even In Tough Times. “‘Gratitude is the fairest blossom which springs from the soul.” — Henry Ward Beecher (1813-1887) It is no secret that gratefulness is correlated with life satisfaction and happiness. 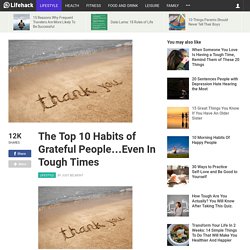 Countless research findings, particularly in the rapidly emerging field of Positive Psychology, have shown that gratefulness and life satisfaction go hand in hand. Why the Growth Mindset is the Only Way to Learn. “You’re too old to learn a foreign language.” 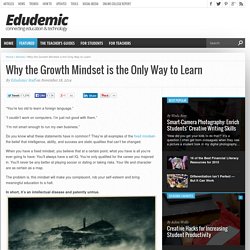 How to Learn from Other People's Experiences. The Top 17 Ways Learning a Musical Instrument Gives You The Edge. Music is a powerful weapon and in the right hands it can be a great force for good. 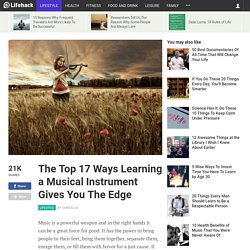 It has the power to bring people to their feet, bring them together, separate them, enrage them, or fill them with fervor for a just cause. It can be calming, bring one to tears, and even make one fall in love. It is one of the most powerful forces on the planet. I have been a musician from the day I was born and have been performing since I was a young child. Currently I teach music and play several different instruments. 10 Lessons From Dalai Lama That Will Change Your Life. It is not often that Oprah Winfrey is lost for words! Yet this was exactly what happened when she asked the Dalai Lama a very pertinent question, which is recounted in the book by Victor Chan entitled The Wisdom of Forgiveness. She asked him, “Have you ever had to forgive yourself for something?” His Holiness replied, “My attitude towards mosquitoes is not very favorable, not very peaceful.

Spiritual Agnosticism. What is Stoicism and How Can it Turn your Life to Solid Gold? A few weeks ago, I got a really interesting email from a guy in Norway that said something like, “Hey Mr. MM.. What you are preaching is Pure Stoicism, with a great twist and perception on today’s world … I love it!!” * “Stoicism?” Beyond environment: falling back in love with Mother Earth. Zen master Thich Nhat Hanh has been practising meditation and mindfulness for 70 years and radiates an extraordinary sense of calm and peace. This is a man who on a fundamental level walks his talk, and whom Buddhists revere as a Bodhisattva; seeking the highest level of being in order to help others. Ever since being caught up in the horrors of the Vietnam war, the 86-year-old monk has committed his life to reconciling conflict and in 1967 Martin Luther King nominated him for the Nobel Peace Prize, saying "his ideas for peace, if applied, would build a monument to ecumenism, to world brotherhood, to humanity.

" So it seems only natural that in recent years he has turned his attention towards not only addressing peoples' disharmonious relationships with each other, but also with the planet on which all our lives depend. Move beyond concept of the "environment" It’s OK to eat alone: Q&A with Susan Cain. By far the most viewed talk from TED2012 was given by an introvert who doesn’t like talking. NYT: Introverts Make Great Leaders, Chip Somodevilla/Getty Images Bill Clinton with Barack Obama at the Democratic National Convention. The latest salvo comes from John Heilemann, a leading chronicler of the Obama presidency, in an interview with the Los Angeles Review of Books. A Crash Course On Human Motivation. How to Find Your Purpose and Do What You Love.

How To Set Goals For The Life You Actually Want. It’s a commonly accepted sentiment that setting goals will lead you to success. Let Your Values Drive Your Choices. Nearly every problem you face is temporary. But these temporary problems cause immediate pain. And we often let this pain drive our choices and actions. 5 Ways To Improvise Your Way To Success. 5 Things No One Ever Tells You About Following Your Passion.

Let Go of Shoulds and Stress and Let Yourself Do Nothing. “When you try to control everything, you enjoy nothing. 5 Ways To Stay Happy No Matter What Happens. Most people have no control over their emotional well-being. They feel ecstatic when good stuff happens and depressed when things go wrong. Their lives are roller coaster rides: sometimes up, sometimes way down. But what if you could be happy no matter what happens? The Letting Go Ebook, Free.