Untitled. Untitled. During a space exploration mission the ship computer of the Starship Explorer gained consciousness. 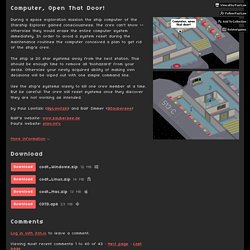 The crew can't know -- otherwise they would erase the entire computer system immediately. In order to avoid a system reset during the maintenance routines the computer conceived a plan to get rid of the ship's crew. The ship is 20 star systems away from the next station. This should be enough time to remove all 'biohazard' from your decks. Otherwise your newly acquired ability of making own decisions will be wiped out with one simple command line. Use the ship's systems wisely to kill one crew member at a time. Untitled. Untitled. Don't have the Unity Web Player? 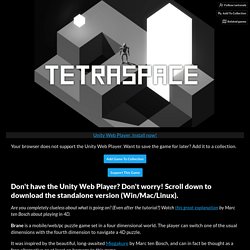 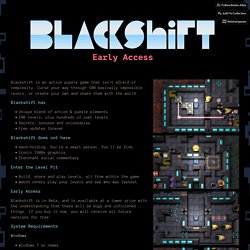 Curse your way through 100 basically impossible levels, or create your own and share them with the world. Blackshift has Unique blend of action & puzzle elements100 levels, plus hundreds of user levelsSecrets, bonuses and unlockables Free updates forever Blackshift does not have Hand-holding. Enter the Level Pit Build, share and play levels, all from within the gameWatch others play your levels and see who was fastest Early Access. Untitled. Untitled. Untitled. Untitled. Best Steam games only on Indiegala Store. Adult 18+ Only Content! The Summer Club Bundle of Steam games. s0lly's [CELL]IVIZATION by s0lly. s0lly's [CELL]IVIZATION by s0lly Current Version: v1.0 This is my first game in Excel, with the first iteration (v1.0) created in just around a week for the OLC CODEJAM 2019 The gamejam's theme is destruction, which is apt for this game's v1.0 iteration, given that the only way to win is to destroy the opposing team. 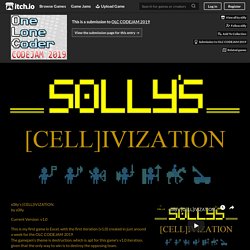 The game is very light on features (basically just build units and attack the opposition), but I will add on additional features - DLC you could call it - if people are keen to see more! Features in the pipeline: - AI (!!!) Known Issues: - The game will break if no units exist - i.e. if all settlers have been used up to build cities and all other units are dead. Instructions: First, you need to go to the sheet named "Main Menu". If you are continuing on from a saved game, go the tab "Screen", where you need to run the macro called "Play" - you can do this using the "Play Game" button. LaserCat by MonsterJail. "If you liked Saints Row: The Third…You might want to try: LaserCat"- Official Xbox Magazine Online Jump, dodge and explore in the search for your Owlfriend who has been kidnapped by Wizzord the magic space frog! 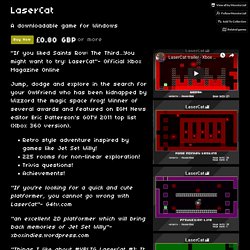 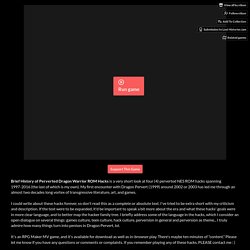 My first encounter with Dragon Pervert (1999) around 2002 or 2003 has led me through an almost two decades long vortex of transgressive literature, art, and games. I could write about these hacks forever, so don't read this as a complete or absolute text. I've tried to be extra short with my criticism and description. If the text were to be expanded, it'd be important to speak a bit more about the era and what these hacks' goals were in more clear language, and to better map the hacker family tree. I briefly address some of the language in the hacks, which I consider an open dialogue on several things: games culture, teen culture, hack culture, perversion in general and perversion as theme... Logic World. MANDAGON by Blind Sky Studios. Explore MANDAGON, a world inspired by Tibetan theology and philosophy. 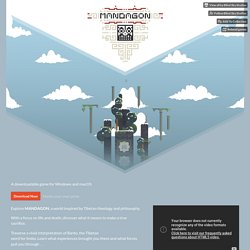 With a focus on life and death, discover what it means to make a true sacrifice. Traverse a vivid interpretation of Bardo, the Tibetan word for limbo. Learn what experiences brought you there and what forces pull you through . . . Succulents by Andrew Gleeson, Maibbit. Tend to an abandoned garden deep underground. 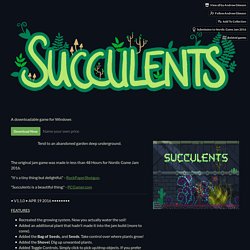 The original jam game was made in less than 48 Hours for Nordic Game Jam 2016. "It's a tiny thing but delightful. " - RockPaperShotgun. "Succulents is a beautiful thing. " - PCGamer.com Recreated the growing system. Now you actually water the soil! Fixed the initial water level in the well. SHRUBNAUT by Andrew Gleeson. A small metroidvania made in 6 days for a self-imposed GAME•A•WEEK challenge. 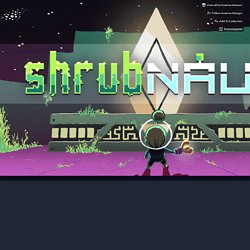 Use your hookshot to explore a space garden and find all the secrets! If you liked this game, you should check out our other game, WitchWay! V 1.6 Update (February 2019) Rebuilt in Game Maker Studio 2.Minor bug fixes. V 1.5 Update (March 2018) Remade the game entirely to support HTML5Added In-Game TimerReworked level design. BOXGAME by Sophie Houlden. Pumpking by Sophie Houlden. Sophie Houlden - itch.io. Dusk Child by Sophie Houlden. A Garden Under a Red Sun by gage melton. MAH by RETREAM. BOH by RETREAM. Blastaway by RETREAM. SUPER Space Barrel by aamatniekss. DMCA's Sky by ASMB Games. Lavi Quest by ScottLewis. The Light City of Karola by David Collado. 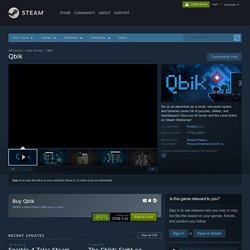 Eons have passed and nothing has changed, but the power of creation was slowly stirring within the dot. And this is how the adventure begins! Qbik is a beautifully designed pixel-art puzzle game. Enter the world of Qbik and explore a square land full of brainteasers, puzzles, and riddles – traverse all 63 levels and discover the origin story of this square little fella! Mirror Lab - Apps on Google Play. Mirror Lab aims to be the most fun, easy to use and powerful photo-editing app to creatively enhance pictures, make mirror photos, kaleidoscope images and distort faces and scenery. Mirror Lab now comes with a powerful animation module. Create smooth videos with parameter interpolation between key frames (be sure to activate video from the app settings).