Concealed Weapons Training Program - Join Arizona Home Defense. The Reason You Need Firearm Training Before Buying One. A large community of firearm owners in the US say personal and family safety are the key reasons why they own a firearm such as a handgun, pistol or a rifle. 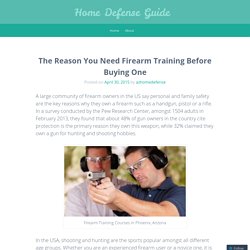 In a survey conducted by the Pew Research Center, amongst 1504 adults in February 2013, they found that about 48% of gun owners in the country cite protection is the primary reason they own this weapon, while 32% claimed they own a gun for hunting and shooting hobbies. In the USA, shooting and hunting are the sports popular amongst all different age groups. Whether you are an experienced firearm user or a novice one, it is recommended to have firearm training by an NRA certified instructor. Gun Safety for Women - WJBF-TV ABC 6 Augusta-Aiken. Augusta, GA - Between 2005 and 2011, the percentage of American women who own guns nearly doubled, going up from 13 to 23 percent. 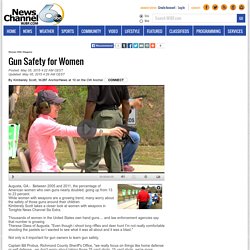 While women with weapons are a growing trend, many worry about the safety of those guns around their children.Kimberely Scott takes a closer look at women with weapons in Tonights News Channel Six Extra. Thousands of women in the United States own hand guns.... and law enforcement agencies say that number is growing. Theresa Glass of Augusta, "Even though i shoot long riffles and deer hunt I'm not really comfortable shooting the pastels so I wanted to see what it was all about and it was a blast. " Not only is it important for gun owners to learn gun safety, Captain Bill Probus, Richmond County Sheriff's Office, "we really focus on things like home defense or self defense...we don't worry about taking those 25 yard shots, 15 yard shots, we're more worried about those close in shooting skills that mimic home defense. " Embedding Home Security. In the technology ruled world we live in the minimum for home security is often just a basic alarm system and the pinnacle is a really good alarm system. 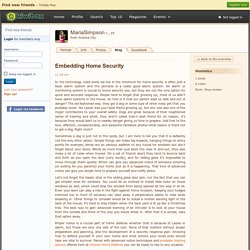 An alarm or monitoring system is crucial to home security yes, but they are not the only option for quick and accurate response. People tend to forget that growing up; most of us didn’t have alarm systems in the house. Concealed Weapon Courses - NRA Certified Training for Personal Protection. Arizona "Self-Defense" Shooter Changes Story, Is Arrested. A man who fatally shot a tenant on his father's property in Mesa this weekend was arrested Wednesday after recanting his story about shooting the man in self-defense. 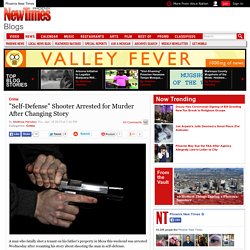 According to the Maricopa County Sheriff's Office, 39-year-old Scott Stradling initially told deputies that he had tased and shot Bill Harrison, who'd been living in a motor home in the backyard of the property where Stradling and his father both live. Court documents obtained by New Times indicate that Stradling changed his story this weekend in an interview with detectives. Deputies responded to the call at the home near the Mesa-Apache Junction border just before noon on Saturday, where they found Stradling with blood on his clothes, hands, and face. Harrison was lying face-up in the trailer in the backyard, and although CPR was performed, Harrison was eventually pronounced dead at the home. 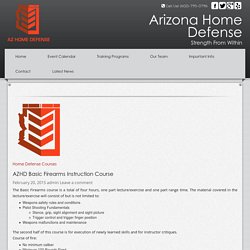 The material covered in the lecture/exercise will consist of but is not limited to: Weapons safety rules and conditionsPistol Shooting FundamentalsStance, grip, sight alignment and sight pictureTrigger control and trigger finger positionWeapons malfunctions and maintenance The second half of this course is for execution of newly learned skills and for instructor critiques.Course of fire: No minimum caliberMinimum 100 Rounds FiredNo QualificationFiring Ranges:5 yards, 10 yards and 15 yardsStandard targets used Ear protection and eye protection are required, loaner firearms as well as ammunition are all available through Elite Ordnance Manufacturing at time of course. 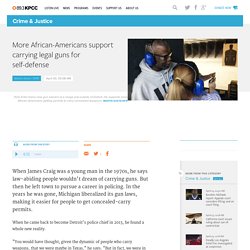 But then he left town to pursue a career in policing. In the years he was gone, Michigan liberalized its gun laws, making it easier for people to get concealed-carry permits. When he came back to become Detroit's police chief in 2013, he found a whole new reality. "You would have thought, given the dynamic of people who carry weapons, that we were maybe in Texas," he says. "But in fact, we were in Detroit, Michigan! " Police chiefs usually don't like the idea of citizens carrying concealed guns for self-defense, but Craig says he had to be realistic about the situation in his hometown. NRA Basic Pistol & AZ Conceal Carry Permit Class. The first course is at least 8-hours long and includes classroom and range time learning to shoot revolvers and semi-automatic pistols. 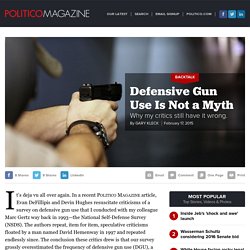 In a recent Politico Magazine article, Evan DeFillipis and Devin Hughes resuscitate criticisms of a survey on defensive gun use that I conducted with my colleague Marc Gertz way back in 1993—the National Self-Defense Survey (NSDS). The authors repeat, item for item, speculative criticisms floated by a man named David Hemenway in 1997 and repeated endlessly since.

The conclusion these critics drew is that our survey grossly overestimated the frequency of defensive gun use (DGU), a situation in which a crime victim uses a gun to threaten or attack the offender in self-defense. But what DeFillipis and Hughes carefully withheld from readers is the fact that I and my colleague have refuted every one of Hemenway’s dubious claims, and those by other critics of the NSDS, first in 1997, and again, even more extensively, in 1998 and 2001. Skeptical readers can check for themselves if we failed to refute them—the 1998 version is publicly available here. Follow Self Defense Training Organization in Arizona. Get CCW Training Course at AZ Home Defense. Home Defense Training Programs in Arizona. Owning Gun Near School Area m- PLEASE FOLLOW THIS RULES. “But I live in Arizona, I don’t need a concealed weapons permit…” “In 2010 Arizona’s constitution was amended to state that anyone over the age of 21 as long as they were a resident could conceal a firearm at any time”. 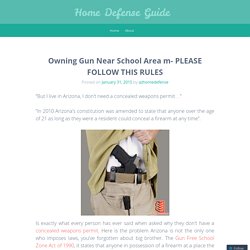 Is exactly what every person has ever said when asked why they don’t have a concealed weapons permit. Here is the problem Arizona is not the only one who imposes laws, you’ve forgotten about big brother. The Gun Free School Zone Act of 1990, it states that anyone in possession of a firearm at a place the person knows is a school zone is a crime. The GFSZA defines “school zone” as: in, or on the grounds of, a public, parochial or private school; or within a distance of 1,000 feet from the grounds of a public, parochial or private school. Don’t panic, because there are three different ways that you can solve this issue, according to the law itself.

"I just moved here, I need home defense training" - Arizona Home Defense - Concealed Carry Weapons - AZ CCW Permit Training Courses. We field a lot of questions from people of all different walks of life, there is one group in particular that usually has the most questions. 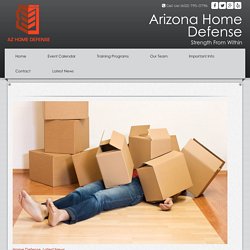 It’s those people who just moved here, everyone has done it a time or two in their life no matter how small the move could be. Some are so bold as to pick their lives up (for those with kids that maybe literal), and move to this fair weathered state we have all come to call home. People often ask what kind of home defense training and firearm they should get, how they should prepare so if something is to happen, and what if anything they should be aware of. Those are some pretty important questions. Specifically for firearms, no one could tell you EXACTLY what gun to buy every time mostly because everyone is so different.

Purchasing the RIGHT Gun - Arizona Home Defense Training. With the nature of this business, we come across a lot of first timers. People who are just coming of age and are looking for their first handgun or ever people who are over 21 just getting into it. The same questions is almost always asked, “What gun should I buy?” Well you’re in luck because we are going to answer that right now. First let’s start out with caliber of gun. As we get started there is something that needs to be address, “stopping power” is a myth, it’s something that someone made up so they could justify buying a Desert Eagle and only owning 45 and above. The caliber of firearm you carry is divided into two different major categories.