MailChimp and the Un-Silicon Valley Way to Make It as a Start-Up. There is perhaps no better example of this other way than MailChimp, a 16-year-old Atlanta-based company that makes marketing software for small businesses. If you’ve heard of MailChimp, it’s either because you are one of its 12 million customers or because you were hooked on “Serial,” the blockbuster true-crime podcast that MailChimp sponsored.

Under the radar, slowly and steadily, and without ever taking a dime in outside funding or spending more than it earned, MailChimp has been building a behemoth. According to Ben Chestnut, MailChimp’s co-founder and chief executive, the company recorded $280 million in revenue in 2015 and is on track to top $400 million in 2016. MailChimp has always been profitable, Mr. Chestnut said, though he declined to divulge exact margins. MailChimp and the Un-Silicon Valley Way to Make It as a Start-Up.

How to Monetize Your Education Technology Product (Hint: Positioning Is Paramount) Lately I’ve seen quite a few edtech companies that hope to graduate from offering a free product to actually monetizing it. 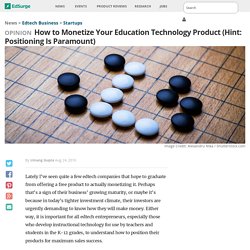 Perhaps that’s a sign of their business’ growing maturity, or maybe it’s because in today’s tighter investment climate, their investors are urgently demanding to know how they will make money. Either way, it is important for all edtech entrepreneurs, especially those who develop instructional technology for use by teachers and students in the K-12 grades, to understand how to position their products for maximum sales success.

Based on my experience in the enterprise software world and now in education technology, I’d like to offer some of my thoughts on how to go about doing this. EEF. 4 Types of Markets, 4 Ways to Gauge Them - The Accelerators. How We Built a Tech Startup Without Tech — The Compass Blog. Mark Zuckerberg had a programming tutor at age 11. 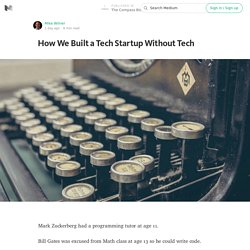 Bill Gates was excused from Math class at age 13 so he could write code. High Stakes Entrepreneurship - The Arbing Blog. December 12, 2014 | Posted in: Businesses It’s 6am in December 2012 and I’m sitting in our office waiting for a prospective angel investor to arrive. 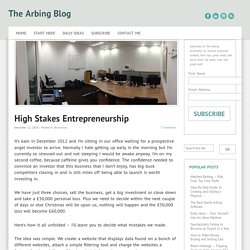 Normally I hate getting up early in the morning but I’m currently so stressed out and not sleeping I would be awake anyway. I’m on my second coffee, because caffeine gives you confidence. The confidence needed to convince an investor that this business that I don’t enjoy, has big buck competitors closing in and is still miles off being able to launch is worth investing in. We have just three choices, sell the business, get a big investment or close down and take a £50,000 personal loss. NuSkool’s Abran Maldonado ‘Drops the Mic’ on Learning From Pop Culture. Editor's Note: Paul Perilla is a recent high school graduate who spent four weeks at EdSurge reviewing popular edtech products and interviewing the executives who built them. 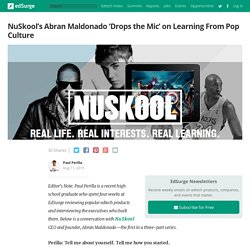 Below is a conversation with NuSkool CEO and founder, Abran Maldonado—the first in a three-part series. Perilla: Tell me about yourself. Tell me how you started. Maldonado: Around 2007 I was doing my masters at Columbia’s [Teachers College] half my day—and meanwhile my full time job during the day, 9 to 5, was working with rappers and producers, and doing artist management with artists like Too Short, The Game, Gucci Mane and all these folks. I’m dealing with these people on the daily basis and then leaving to study education at Columbia at night, every night. I started doing workshops for teachers and for parents. How did everything, including your past, mold you into who you are now? Startup Federation. For Love or Lucre. A veteran social entrepreneur provides a guide to those who are thinking through the thorny question of whether to create a nonprofit, a for-profit, or something in between. 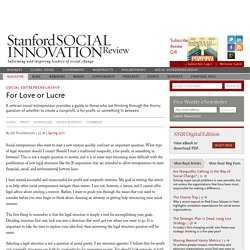 Social entrepreneurs who want to start a new venture quickly confront an important question: What type of legal structure should I create? Should I start a traditional nonprofit, a for-profit, or something in between? This is not a simple question to answer, and it is in some ways becoming more difficult with the proliferation of new legal structures like the B corporation that are intended to allow entrepreneurs to meet financial, social, and environmental bottom lines.

I have started successful and unsuccessful for-profit and nonprofit ventures. New_BusPlanGuide. Start-Up Equity, Founder's Shares, Dividing Up Stock, Equity Splits. Social Business Model Canvas - The tool for social entrepreneurs. Due Diligence Checklist. How to Model Viral Growth: The Hybrid Model. Retention is King (Guest Post) This is a guest post by a friend of mine on retention. 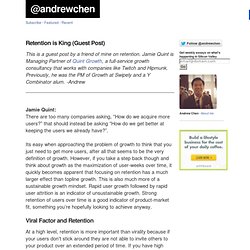 Jamie Quint is Managing Partner of Quint Growth, a full-service growth consultancy that works with companies like Twitch and Hipmunk. Previously, he was the PM of Growth at Swipely and a Y Combinator alum. -Andrew Jamie Quint: There are too many companies asking, “How do we acquire more users?” That should instead be asking “How do we get better at keeping the users we already have?”. Its easy when approaching the problem of growth to think that you just need to get more users, after all that seems to be the very definition of growth. Viral Factor and Retention. Idea to Paying Customers in 7 Weeks: How We Did It. 1.4K Flares Filament.io 1.4K Flares × This is the first of an ongoing series of posts called Building Buffer where we share our methods and learnings with the aim to help people and learn from others who have had similar experiences. 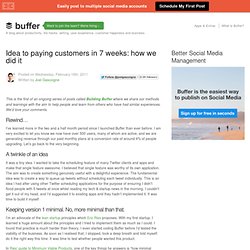 We’d love your comments. Rewind… I’ve learned more in the two and a half month period since I launched Buffer than ever before. I am very excited to let you know we now have over 500 users, many of whom are active, and we are generating revenue through our paid monthly plans at a conversion rate of around 4% of people upgrading.

What is the best way to start a startup. Also, Picking your first customers: the gradient of influence. At Bloomberg Beta, we often ask founders who they will target first to use their product. 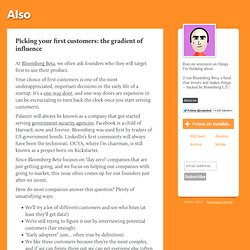 Your choice of first customers is one of the most underappreciated, important decisions in the early life of a startup. It’s a one-way door, and one-way doors are expensive (it can be excruciating to turn back the clock once you start serving customers). Palantir will always be known as a company that got started serving government security agencies. Facebook is a child of Harvard, now and forever. Bloomberg was used first by traders of US government bonds. Since Bloomberg Beta focuses on “day zero” companies that are just getting going, and we focus on helping our companies with going to market, this issue often comes up for our founders just after we invest. Sequoia's Investment Memo on YouTube – The Infovore's Dilemma. It is very hard to get genuine transparency on what VCs look for when making an investment. 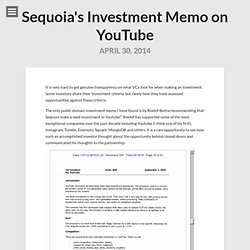 Some investors share their investment criteria, but rarely how they have assessed opportunities against those criteria. The only public domain investment memo I have found is by Roelof Botha recommending that Sequoia make a seed investment in Youtube. Roelof has supported some of the most exceptional companies over the past decade including Youtube (I think one of his first), Instagram, Tumblr, Evernote, Square, MongoDB and others. A Multi-Factor Analysis Of Startups. Editor’s note: Matt Oguz is managing director of Palo Alto Venture Science. 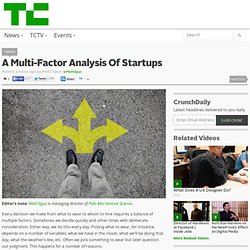 Every decision we make from what to wear to whom to hire requires a balance of multiple factors. Sometimes we decide quickly and other times with deliberate consideration. Either way, we do this every day. Picking what to wear, for instance, depends on a number of variables: what we have in the closet, what we’ll be doing that day, what the weather’s like, etc. Fundraising Mistakes Founders Make. There’s a lot written about what you should do when you raise money, but there hasn’t been as much written about the common mistakes founders make. Social Innovation Initiative. How We Make Trello. Look around you. Is there something nearby that is firmly bolted to the ground? Okay good. Hold onto it. What I learned about online-to-offline. Many new online-to-offline entrepreneurs have asked me about my experience founding Exec. “Uber for X” businesses seem to be the startup of the day – it probably helps that on the face they are less technically complex and more accessible to aspiring less-technical founders.

Guest Post: Tips from Rob Fitzpatrick on how not to fail at customer interviews – by Michael Zirngibl. Michael Zirngibl, co-founder of interact.io (SC 2014) , shares his learnings from a recent Seedcamp Academy onboarding session led by Rob Fitzpatrick. Rob lives and breathes startups. He’s a founding partner of Founder Centric, a YCombinator alum, and author of The Mom Test.

Rob joined us at Seedcamp HQ to help onboard the eight new teams joining Seedcamp this February by sharing insights into customer interviews. Our Dangerous Obsession With The MVP. Editor’s note: Bill Aulet is the managing director of the Martin Trust Center for MIT Entrepreneurship and a senior lecturer at the MIT Sloan School of Management. He is the author of the recently released book, Disciplined Entrepreneurship: 24 Steps to a Successful Startup. The (kinda / sorta) $20,000 Giveaway. A $20,000 giveaway right before the holidays? Stave Blank- A New Way to Look at Competitors. (2) Lean Startups: What's the #1 reason why tech startups fail? - Quora#ans2807357. How Startups Overcome the Capital Gap - Sramana Mitra. By Sramana Mitra | 11:00 AM July 10, 2013. Tim Kastelle blog. Entrepreneurship: What should all first time entrepreneurs know before starting their very first business. E-Myth Revisited - by Michael Gerber.